Six years ago, a National Geographic expedition took photographer Paul Nicklen to Florida’s Three Sisters Springs on the Crystal River, 70 miles north of Tampa. He was there to document the interaction between an increasing number of tourists and the river’s migratory manatees. The river is prime habitat thanks to more than 50 active springs keeping the water a constant 72°F, warming the manatees through winter months.

Manatee-seeking tourists and swim-with-the-manatees tours are a big business in Florida, generating between $20 and $30 million a year.

More than 40 tour operators work in the Crystal River area, alongside manatee-themed gift shops and restaurants. In addition to all this income, manatee tourism has generated some controversy. Manatees annually attract 450,000 people to Florida, most to the Crystal River National Wildlife Refuge. In March of 2016, an estimated 1,200 snorkelers visited the refuges’  Three Sisters Springs Sanctuary in one 24-hour period.

While manatees are curious and some engage with tourists, most prefer to spend their days catching some shuteye.

—manatees spend half the day napping—and hoovering down 10 percent of their body weight in aquatic plants. Motorboats are not allowed inside the Three Sisters Springs Sanctuary, however canoeing, kayaking and swimming with the 10-foot-long, 1,500-pound docile creatures is legal so long as the animal isn’t being touched or harassed, and people stay out of the buoyed restricted areas.

What people fail to acknowledge is the manatees are not here for our amusement, they’re here for their survival, says Matt Clemons, board member of Savethemanatees.org and owner of local outfitter Aardvark’s Florida Kayak Co., which offers small group kayaking tours, but not the more lucrative swim-with-the-manatee tours. In the colder months, when the manatees rely on the springs for survival, they can’t leave the warm water to escape the tourist swarm if stressed—if they do, they’re in danger of cold exposure and boat traffic, both a major contributor to manatee mortality.

Many of Florida’s 6,000 manatees bear scars from collisions with motorboat propellers, says Clemons

“The way we justify this type of tourism is to say if you allow people close access to the animals they will want to better protect them, but there’s no scientific studies that actually prove it,” says Clemons. “The data here is showing the more acclimated to humans the manatees become, the more likely they are to put themselves in harm’s way.”

In the six years since Nicklen took this photo, ramped up conservation efforts, restored habitat and motorboat speed limits near the springs resulted in a record number of manatees in 2016, and the animals were removed from the endangered species list.

The best way to appreciate manatees is from a respectful distance.

Natural manatee behavior can be disrupted by humans who approach manatees too closely. People should never approach, chase, surround, touch, disturb, ride or poke manatees,” says Clemons. “By observing manatees at a distance we have the best chance to observe natural behaviors, giving us a glimpse into their lives.

To get this shot, Nicklen was scuba diving in approximately eight feet of water, shooting with a Canon 1DX in a Nauticam housing. He used two strobes on camera arm extenders to crosslight the manatee.

Paul Nicklen is a National Geographic photographer and co-founder of SeaLegacy, an organization dedicated to protecting oceans via visual storytelling. www.sealegacy.com. 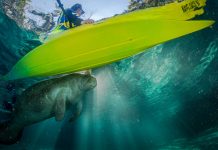 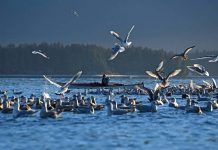