Even a freak blizzard, courtesy of the polar vortex that plagued early spring in the Northeast, can’t deter me from my date with the North Shore Atlantic LV. I scoop up one of these elegant touring mainstays from the distressingly wintry boat yard at Ontario Sea Kayak Centre (OSKC) for a frosty tour on the bay.

When I arrive, OSKC co-owner Dympna Hayes reveals that the smart looking, yellow-decked Atlantic LV I’m borrowing is her own personal kayak for teaching and tripping. “But you can take it for as long as you need,” she offers, eyeing the stubborn blanket of fresh snowfall, “seriously, you can have it until May.”

Hayes came to her Atlantic LV through a student, who found himself struggling to find confidence and comfort in the slender craft. For Hayes’ petite frame, however, the Atlantic LV’s low volume and responsive handling were a perfect fit.

“Lighter, intermediate to advanced paddlers will find it feels most stable,” she confirms, “and it’s a lot of fun for rolling, rough water and surfing.”

The Atlantic LV has a serious pedigree

Eager to test that assertion, I launch the Atlantic LV in water so recently thawed and brain freeze-cold that it seems somehow thicker than normal, like maple syrup. My first impression is that this boat is reminiscent of familiar compact, no-apologies-British sea kayaks, like Sea Kayaking UK’s (formerly NDK) Romany and Valley’s Avocet—with which the Atlantic LV shares outfitting touches like Valley’s bomber rubber hatches, well thought out deck rigging and minimalist seat with integrated backband.

The resemblance shouldn’t come as a surprise; the Atlantic LV is a direct descendent of North Shore’s Shoreline, originally launched in 1984 during the fledgling decade of contemporary British sea kayaks. The Shoreline pioneered a new breed of kayak—the shorter, more playful coastal tourer—becoming an instant, and oft-imitated, success.

[ Read more: The History Of Sea Kayaking—Popularizing The Sport ]

Today, North Shore is operated as a boutique brand by Valley Sea Kayaks and the boats are hand-made at their facility in Nottingham, England.

Drop the skeg and point your toes

Low decks front and back reduce exposure to wind, minimizing weathercocking despite the Atlantic LV’s gracefully upswept bow and stern. Running downwind, deploying the solid-feeling skeg corrects the boat’s tendency to turn slightly into the wind. The shallow-V hull further aids tracking and makes for dynamic feeling edging when I throw the Atlantic LV onto its soft chine for sprightly turns. Plenty of rocker means this 16-footer runs just 13.5 feet of waterline and cranks around with a well-placed stroke and bow draw.

The Atlantic LV feels like an extension of my lower body, rather than a separate craft. That low front deck guides my legs down into the hull so they’re nearly flat, more akin to Greenland-style kayaks than modern, whitewater-influenced ocean play designs. Securely integrated, I can steer the boat just by pointing my toes, and bracing and rolling are a breeze. On a longer tour, however, there isn’t much wiggle room to alleviate pins and needles.

Tour in style with the North Shore Atlantic LV

Sure, there are faster kayaks and more cutting-edge kayaks. And yet I can understand the enduring popularity of the Atlantic design, and why Hayes chose an Atlantic LV as her daily driver. Maybe it’s the years spent paddling British-style kayaks—my own intimate connection formed over hundreds of miles—but gazing across the Atlantic LV’s perky bow just feels so right. I’m filled with an ineffable contentment knowing that the paddlers in my wake are watching the equally chipper profile of its jaunty stern. 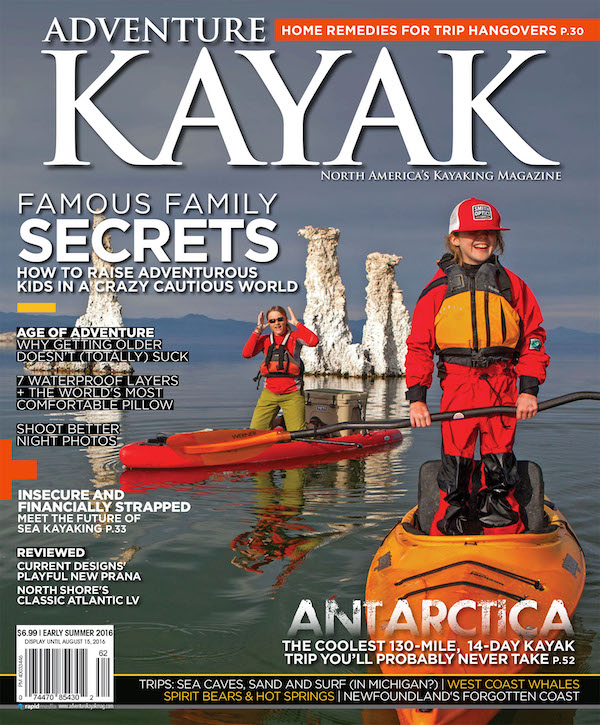