Red Paddle Co describes their updated 11’3” Sport as the perfect step-up from an all-rounder. Those are big shoes to fill since Red Paddle’s all-arounder for the under 240-pound crowd is their best-selling and awarding-winning Ride 10’6”.

On the water with the Red Paddle Co 11’3” Sport

When Red Paddle Co says it’s a step-up, they don’t mean in quality. More on that later. They mean in performance. And by performance, they mostly mean speed. The 11’3” Sport falls comfortably between their do-it-all all-rounders and their narrower and faster specialty Elite racers. So, it falls right where I tell most of my friends they should look.

While Red Paddle’s 11’3” Sport borrows some design features from the Ride all-rounder, like its 32-inch width for stability, its sleeker profile and drawn-out nose is a giveaway that it’s home in a touring lineup of boards for paddlers wanting to go places.

When I first took the 11’3” Sport out for a test spin, it was early in the season. Some of my local paddling spots were still covered in ice. So, I did what every cold water paddleboarder would do. I blew it up in the comfort of my living room.

Like many Red Paddle Co customers, I received the inflatable 11’3” Sport delivered to my door. Of course, the first piece of gear everyone sees during the unboxing is the All Terrain Backpack. Red Paddle takes first impressions seriously. 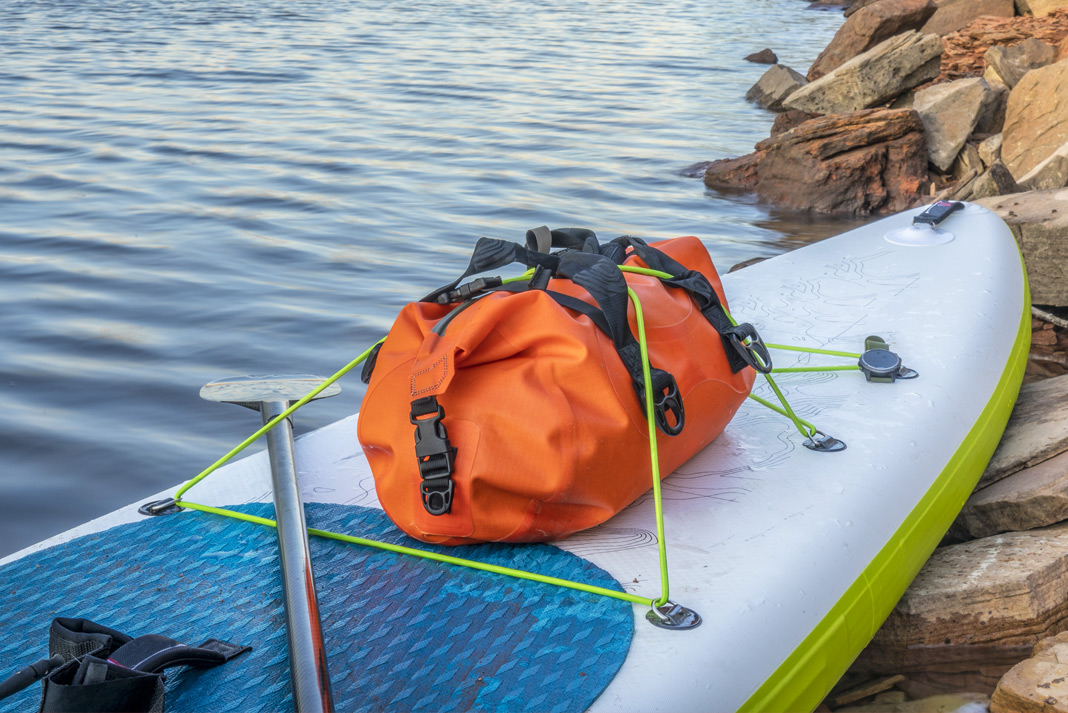 What To Consider When Buying An Inflatable Paddleboard

This isn’t your standard run-of-the-mill inflatable SUP bag. The premium backpack is foil-lined and constructed with durable 800 denier-reinforced nylon cloth and stitched together with sail thread. Comfortable handles and sturdy wheels make rolling this board around easy. Or, for uneven terrain, the built-in Sherpa Carry System unfolds into a comfortable backpack harness. It feels a bit silly to be so impressed with the wide shoulder straps and the extra cushioning for my lower back. But, if the whole point of inflatable boards is portability, then make it as cushy as possible getting to the water’s edge.

Many inflatable paddleboards come as packages, which is especially great for new paddlers. In the bag comes the 11’3” Sport, fin, safety leash, paddle and pump. And not just any pump.

“Too big and clunky,” I’ve heard people say about the Red Paddle Co pump, usually from competitors. The Titan and newly updated Titan 2 is entirely different from other inflatable SUP pumps on the market.

The Titan Pump was the first dual-action chambered SUP pump, the two chambers push maximum air volume and pressure into the board saving effort and time. Time is money, they say. Red Paddle updated the Titan for 2021. Now the Titan 2 has a removable handle and foldup feet, and it takes up 30 percent less space in the bag. More room for my paddling gear.

While no inflatable board will ever be as rigid as a hard board, the 11’3” Sport at the recommended maximum inflation pressure of 22 psi feels darn close.

Unique to Red Paddle’s Sport series is the Rocker Stiffening System or RSS. Partway through inflation, glass fiber battens are slid into pockets laminated on each rail of the board. These glass fiber struts provide more rigidity reducing the amount the board can flex. Clever.

So, my drysuit and I found a small, sheltered pond as there was strong winds and whitecaps at my usual paddling spot. I was impressed right away by how stable and not edgy the 11’3” Sport felt. The extra stiffness of this board due to the RSS battens and higher psi do make the board feel very stiff and secure.

The 11’3” Sport feels quick. It’s not race board quick but, as Red Paddle claims, is a notch up from an all-around board and not intended to be a racer. It does feel fast for a board of this length, perhaps due to what Red Paddle calls their Speed Tail innovation. New for 2021, this rubberized edge on the tail is designed to help with water release to increase speed. I also noticed this board tracked well, aided by a single FCS 12-inch touring fin to keep it on course.

Having worked retail and as a sales rep for another inflatable board brand, I spent years explaining the differences between department store boards and specialty brands. Not an easy task. On the outside, boards can look very similar.

Red Paddle’s production process has solidified the brand as one of the leaders in this crazy, highly competitive inflatable paddleboard market. Each Red Paddleboard is built in their own facility. Where, we asked. They wouldn’t say. Except to say theirs are the only boards built there. Red Paddle also said it takes a whopping 72 hours to construct each board, which is more than 10 times the industry average.

Why so long? Red Paddle manufactures its boards using their own patented Monocoque Structural Laminate Fusion technology. Instead of simply coating an interior surface with liquid PVC to make an airtight surface, Red Paddle uses an adhesive to coat the interior, exterior and the threads of its reinforced drop stitch core to seal and bond. A layer of high-density structural PVC is then machine laminated to this adhesive layer. It’s more time-intensive, but Red Paddle says it creates an extra-stiff board and a lighter board too, shaving off more than four pounds from the average weight of a similarly sized inflatable board. And we have to trust them because it’s all on the inside we’ll never see.

I think too many new paddleboarders get talked into all-rounders. Sure, they may surf it once in a while, but probably won’t living days from the ocean like me. Red Paddle’s 11’3” Sport is the next step up in performance, but a step you could make initially. Why not? Almost all the stability with the bonus of more glide. Who wouldn’t like to cover more water with less effort? Maybe do some cross-training or an overnighter. When you do buy a racer, the solid build of the Red Paddle Co. 11’3” Sport will be in great shape and easy to sell. But you probably won’t sell it.

The step-up you didn’t know you were ready to take. | Feature photo: Scott MacGregor

Paddleboard Types You Should Know...

How To Size A Paddleboard

What’s The Difference Between A...