“Your best defense in bear country is your brain—your knowledge and understanding of bears,” writes Steve Herrero in his 2003 pioneering book, Bear Attacks: Their Causes and Avoidance. By keeping a clean camp, watching for bear sign, making noise while in the woods, traveling in a group and carrying bear spray as a last resort, you can help ensure a bear sighting is the highlight of your wilderness trip, not the downfall. Here’s what you need to know about the most popular bear safety items.

Bear spray is widely recognized as the most effective means of repelling an attacking grizzly or black bear in a close encounter. Biologists and professional guides don’t travel in bear country without it, and neither should you. A study of Alaskan bear encounters found 98 percent of those who used bear spray were uninjured, while the remaining two percent received only minor injuries. Frontiersman’s 325-gram canister fires for eight seconds and expels two-percent capsaicinoids, which cause temporary respiratory distress. On land, keep the spray accessible, not buried in a hatch or pack. Remember: Bear spray is only effective at close range, usually 30 feet or less, and don’t season yourself by being downwind.

Flares and bangers are inexpensive, easy-to-use and effective deterrents before a bear gets too close for comfort, according to the Get Bear Smart Society. Shots fired into the air—not at the bear—explode after 90 to 120 feet, creating a loud boom. They can be fired from pen launchers or pistols. However, if not used correctly, these tools may escalate the situation—if a banger explodes behind the bear, it may cause the bear to advance in fear. It can also be a fire hazard in dry conditions. Tru Flare Pen Launcher Kit includes red signaling flares and orange noise-making bear bangers—it’s a lightweight, budget-friendly option easy to keep close at hand.

Bear canisters are up to the challenge of withstanding being batted around with catcher-mitt-sized paws and are just large enough to avoid the 1000 psi crushing strength of a bear’s jaws. BearVault’s BV500 is 8.5 inches in diameter and has 11.5 liters of capacity, enough to hold a week’s worth of dehydrated food and toiletries for a single person. It weighs just over two pounds. There’s no doubt it’s a bulky little unit—sort of like carrying around a small keg—but it comfortably nestles in a canoe pack with lots of room to spare. Plus, it doubles as a sweet camp seat. Kayakers will prefer the stubbier BV450 version for half the volume and easier packing, or another storage method. Both units are transparent, with wide, easy-access openings and tool-free operation. Canisters are mandatory in a dozen national parks, including Alaska’s Kenai Fjords National Park. Store on-ground, 100 yards downwind from camp.

Light as a feather but strong as a bear is the promise of Ursack’s tear-proof bags. The “bulletproof” polyethylene fabric of Ursack’s Major XL is the only alternative to bear-proof canisters certified by the Interagency Grizzly Bear Committee. Weighing a half-pound, the Ursack Major XL bear bag is a fraction of the weight of a traditional bear canister for a similar volume. Its 15-liter capacity can hold about a week of dehydrated food for one, or a long weekend of food for two. The Ursack is more packable than a canister and faster to secure than a bear hang. To use, take the bag 100 feet from camp and anchor on a tree with a figure-8 knot. What’s the catch? While the highly tear-resistant weave will prevent a bear from getting your food, Ursack warns it may not prevent puncturing or crushing. The sharp teeth of some small critters could puncture holes. Double-check local regulations as some national parks, including Yosemite, require storing food in a canister.

While a 1982 study based in Glacier National Park suggested the jaunty jingle-jangle of a bear bell will warn bears away, a more recent study by American bear biologist Tom Smith implied the opposite. Either way, bells aren’t particularly noisy, and their tinny tinkle can get lost in the other wilderness sounds. The Get Bear Smart Society recommends alerting bears to your presence by talking loudly and singing. Renowned Canadian bear biologist Stephen Herrero prefers yodeling. You could also try Nickleback.

A marine horn or wildlife deterrent horn can be heard up to a half-mile away with a 120-decibel berrrrp. Unfamiliar sounds—including whistles—may deter an approaching bear at a distance. However, their efficacy is inconclusive. The U.S. Fish and Wildlife Service’s deterrence guidelines state, “The use of commercially available air horns and other similar devices…may be effective in deterring bears while causing no lasting or permanent harm to individual animals.” It’s an inexpensive item already in the kit of many coastal explorers and poses none of the risks of bear bangers.

[Also read: Would You Rather Be Paddling With People Or Bears]

Criticizing the efficacy of bear hangs has become a bit of a trend. Naysayers claim bear hangs don’t work, and they take too long to rig. But it’s not so much that bear hangs don’t work—just that when done poorly, they’re an invite for a local ursine to belly up to a buffet. A bear hang is an effective way to keep your food safe and keep bears from being habituated when done correctly. And it’ll just cost you the price of rope. An effective bear hang suspends the goodie bag 12 feet off the ground, eight feet from the tree trunk and five feet from the suspending tree limb. If paddling above the treeline or in an area dominated by stubby or short-limbed trees, choose another method. Proper food and garbage storage is essential to keeping bears wild and safe—a fed bear is a dead bear.

Forget about your worries and your knife. | Photo: Kaydi Pyette 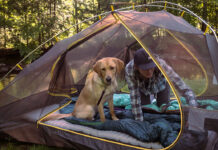 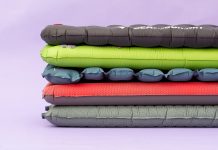 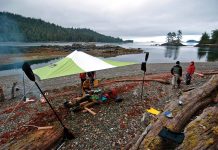 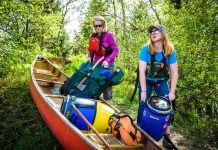 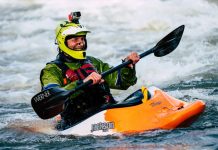