My goal last winter was to become a half-decent Great Lakes surfer. That was my first mistake. Forget that I’d only ever taken one surf lesson. I don’t do any other board sports. And the frigid lake isn’t the most conducive learning environment. I was undeterred, counting on beginner’s luck to make up my gap in experience. What could go wrong?

This is how I found myself bobbing around in Lake Ontario on a frigid December morning, squinting against the sleet pelting my cheeks, clad in six millimeters of neoprene. After 90 minutes of trying and failing to catch the short swells rolling past me, my hands and feet were aching with cold—time to go in.

I paddled closer to shore to time my exit.

“You goin’ in?” one surfer called over. The icicles in his beard hid his smile.

“Oh yeah,” I told him, misunderstanding his question completely.

“Cool,” he said, turning away and paddling hard to catch the big wave I was also—unexpectedly—cresting.

I lost my balance, fell off my board and resurfaced. I turtle rolled to miss the next crashing wave… came back up… got smashed in the face with one wave, two waves… lost grip on my board… got dragged feet-first by my leash towards shore. I tried to get my footing and grab my board before the same receding wave pulled it past me and yanked me off my feet again. Fail.

Four waves toppled me before I staggered out and stumbled back to my snow-covered car. Inside I sat shivering, heat jacked, wet neoprene dripping onto the seats, my fingertips jammed into the air vents waiting for the feeling in my hands to return enough to wrestle out of the wetsuit.

Man, I thought, being a beginner sucks.

[ Read more: The 7 Worst Tips Given To Beginner Kayakers ]

But the difficulty of awkward beginnings is worth the trouble, according to Tom Vanderbilt, the author of Beginners: The Joy and Transformative Power of Lifelong Learning. The book highlights his yearlong experience tackling five new skills: chess, singing, drawing, juggling and surfing.

Vanderbilt begins his journey after noticing how many parents spend the duration of their kids’ extracurricular lessons on their phones. Desperate to shake up his “mid-career competence,” Vanderbilt joins his daughter in chess lessons and takes on learning as a sport.

Never too old to be a beginner

I read Beginners shortly after being chundered in the surf; around the same time, I wondered if I’d missed the window to learn this skill.

Yes, learning at a young age is easier. That’s partly due to the sponge-like brains of youth. Sure, kids also have more free time. And they have less fear of injury—both to body and ego. Nevertheless, regardless of age or how busy you are, introducing a new skill is one of the most life-enhancing things you can do, Vanderbilt argues. Learning something new and challenging, particularly with a group, has proven benefits for the brain.

“A study that had adults aged 58 to 86 simultaneously take multiple classes—ranging from Spanish to music composition to painting—found that after just a few months, the learners had improved not only at Spanish or painting, but on a battery of cognitive tests. They’d rolled back the odometers in their brains by some 30 years. They’d changed in other ways, too: they felt more confident, they were pleasantly surprised by their work, and they kept getting together after the study ended,” writes Vanderbilt about the findings of neuroscientists.

[ See also: The Science Behind Why Paddling Makes Us Happier & Healthier ]

Buoyed by the encouragement, I kept paddling out. I spent my canoeing off-season captivated by storm systems, water quality data reports and the hydrodynamics of waves, while also connecting with a new community of water lovers.

Learning is a process, and it’s not linear

Vanderbilt’s advice is not to get hung up on goals. My first mistake, remember?

“Focus on the process, not some endpoint of mastery. Make learning itself the goal,” he says. “And remember: Mistakes are okay. Mistakes are where the learning is happening.”

It’s okay to be bad; we’ll get better—and hey, there are benefits even if we don’t.

Kaydi Pyette is the managing editor of Paddling Magazine. In mid-January, with the air temperature -7°C and water temperature 2°C, she caught her first wave.

George Bernard Shaw once wrote, “Man resolutely progresses in all things by making a fool of himself.” So do canoeists. | Feature photo: Geoff Whitlock 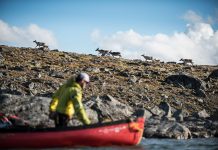 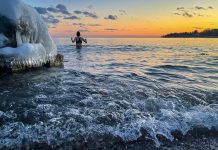 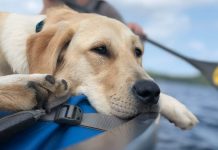