Just months after completing the first-ever west to east canoe journey across Canada’s Yukon, Northwest and Nunavut territories in 2012, Minnesota-based adventurer Winchell Delano, 30, felt an itch. He scratched it by planning a 5,200-mile south to north expedition from the Gulf of Mexico to the Arctic Ocean.

To complete the journey in a single season meant starting in January—and traveling against the current for most of the route. But the six-man team lucked out: Low water meant easier upstream paddling, and their route avoided the hotspots of an active wildfire season in northern Canada.

Delano and his friends, Adam Trigg, Luke Kimmes, John Keaveny, Dan Flynn and Jarad Moore, touched down at the mouth of the Coppermine River in Kugluktuk, Nunavut, in September 2015.

The documentary of their trip is available to rent or buy here.

What was Rediscover NA like compared to your last trip?

Trans-Territorial was an anxious sprint. This was an interpersonal marathon. We knew it was possible to paddle from the Gulf of Mexico to the Arctic Ocean because several people have done versions of it. The question was, could we come together and do it as a group of six. I’d rather have longer, harder workdays than have to discuss every decision ad nauseam.

Why call it Rediscover North America?

I was out in Utah working in wilderness therapy. I was trying to get a rapport with a kid, describing this upcoming trip, asking him if he had any ideas for a good name. I could tell he didn’t give a shit about it, yet one thing he said stuck: He called it a rediscovery. That’s exactly what we did, stitching together all these existing routes into one big journey.

Where did you meet the most interesting people?

We thought there’d be a juxtaposition between the heavily populated south and the empty north. However, kindness transcends geography and encounters with people were the greatest highlight of our trip. It didn’t matter where, people who had no reason to welcome us would call us in to shore, feed us a meal and give us a place to sleep.

Who made the biggest sacrifice to join this journey?

You could make a compelling argument for anyone. A year and a half ago, I gave everyone the same prospectus. It outlined the trip, how long it would take and what type of conditions. When you do a 245-day trip you give a lot up. But you gain a lot, too.

That’s a good question. It’s been three weeks since we finished and I still have a trip hangover. It’s weird to be home and not have my day revolve around eight hours of paddling. I’m still waking up at four in the morning, thinking we need to get up and move. 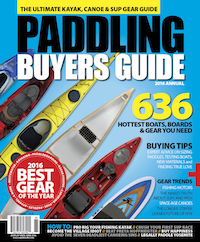 This article originally appeared in the 2016 Paddling Buyer’s Guide issue.

Paddleboarder Circumnavigates Great Britain In A First For Water Safety