It’s no exaggeration to say water is in the blood for whitewater paddler, instructor and paddle school manager, Stefi Van Wijk. Most days Stefi looks like she’s come straight off a paddling trip which, in all likelihood she is, complete with the calm that comes from spending the day on the water and pushing yourself to do your very best, and then doing it.

Stefi is so passionate about paddling that it’s hard to imagine a time when a life on the water wasn’t a given, particularly in light of her family background. Stefi’s grandparents founded the renowned paddling school, Madawaska Kanu Centre (MKC), nearly 50 years ago. Stefi’s grandfather, Hermann, and mother, Claudia, were the first to descend the Ottawa River, where they ultimately founded the world-renowned rafting resort, OWL Rafting.

A life spent on the water

Needless to say, paddling played a big role in Stefi’s family growing up. In fact, Stefi’s sister was known as the best female whitewater kayaker in the world for a number of years, and paddling and the water continue to be a passion for Stefi’s parents, Claudia and Dirk Van Wijk, one they have encouraged in their daughters.

“I grew up on the water in a canoe or kayak,” Stefi said. “My earliest memories are of being in the bow of my dad’s canoe, or my mom’s tandem kayak.”

Stefi’s childhood years were spent transitioning seasonally between winters in Ottawa and summers on the water in a canoe or kayak at OWL or MKC, or on family paddling trips. This lifestyle meant Stefi’s relationship to both areas wasn’t given a chance to deepen, as she was always moving from one community to another.

There were many simple things she wasn’t able to experience as a result. For example, she had “never seen all four seasons of a single tree in my whole life…so that was a really big deal for me.” Now settled in the Ottawa Valley’s community of Barry’s Bay, Stefi has finally found a place to call her own.

While she is drawn to all waterways, for Stefi, the Madawaska River has been the one constant in a life spent transitioning between the Ottawa Valley in the summer months and Ottawa, where she attended school, during the rest of the year. Every summer, she and her family would make the drive to OWL or MKC, traveling the familiar roads that returned her to her water girl roots.

“The river is where I’m my best self. It doesn’t care who I’m pretending to be.” -Stefi Van Wijk

At 230 kilometers long, the Madawaska River has plenty to offer all levels of paddlers. It’s divided into four paddling sections as it makes its journey from Source Lake in Algonquin Provincial Park to the Ottawa River—the Upper Madawaska, Middle Madawaska, Palmer Rapids and Lower Madawaska.

The Mad is known for its park and play rapids as well as longer stretches of whitewater. Those looking for flatwater will find that too, either on the river itself or the lakes it flows through.

Madawaska River camping can be had in both front-country and backcountry experiences—the latter within the non-operating Lower Madawaska River Provincial Park. In need of a boat? Madawaska River canoe rentals, as well as kayak rentals, are available from various establishments along the river, depending where paddlers are starting or ending their trip.

And don’t forget that getting to the put-in is itself an experience.

“It’s being on the hilly roads around the Madawaska Valley and the familiarity there…it brings me home,” Stefi said.

Finding her own way

When you come from a family of passionate, avid and competitive whitewater kayakers, one would think it would be easy to embrace paddling. For Stefi, finding her way to the water was a route that wasn’t always clear. The competitive nature of her family’s passion didn’t resonate with her, and for many years she struggled to carve her own path.

“I had to explore my personal reasons or values for connecting to the river. My reasons are different than my mom and dad’s,” Stefi said. “My parents presented the way they connected with the river, and my sister loved that connection. I always kind of felt like the black sheep, but I just needed to explore and create my own unique way of connecting with it. In the end, that way is almost valued more because it’s different.”

The chance to work as a young apprentice canoe guide at the age of 16 gave Stefi the opportunity she needed to strike out on her own and establish her own connection with the water in a way that wasn’t based on competition, the way paddling had been presented to her.

When she injured both shoulders guiding, Stefi was forced to take a temporary hiatus and turned her attention to the administrative side of the family’s companies. This was the beginning of her journey facilitating other people’s introduction to and experiences on the water.

These days, Stefi’s role is to help others learn to love the river as much as she does and bring more paddlers into the paddling community. “Putting bums in boats,” as Stefi’s mom Claudia likes to say. There are still expectations that come along with being manager of MKC, but Stefi isn’t shy about embracing the challenges the role brings.

[ Paddling Trip Guide: View all courses and trips at the Madawaska Kanu Centre ]

“I run a paddling school, so there’s a bit of an expected identity that comes with that, and I can put pressure on myself to live that way,” said Stefi. “I try really hard as an instructor, as a teacher and as a leader to be authentic in my insecurities and my weaknesses so I can inspire others to hopefully show up and be who they are.”

MKC offers a range of paddling courses, from beginner to advanced instruction in the form of day- to week-long programming. In addition, the paddling school provides professional certification in first aid, river rescue and instructing. On top of that, MKC runs whitewater rafting trips.

Even after more than two decades of experience on the water, the river never stops teaching Stefi.

“Every time you’re on the water you learn what you need to learn. It teaches you, if you pay attention. Every lesson I’ve learned in life started on the water.”

Do you want to experience the joy of paddling Stefi describes here? Plan an adventure on the water in Ontario’s beautiful Highlands. 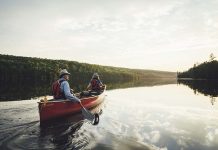 Journey Through The Jungle: Guide To Kayaking Hawaii’s Wailua River 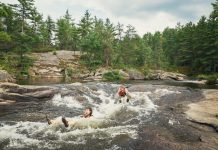