There was a time when every kayak was a down-river kayak. Then rodeo came along and the terms “kayak” and “playboat” became interchangeable and river running was only what you did to get to the next wave.

While traditional river running never went away, for a while nobody was buying so new developments in specific down-river boat design were few and far between. But lately, pure river-running boats are getting attention again by both paddlers and designers.

Enter the Thunder 65, Riot’s revision of the all-purpose, river-running kayak. The Thunder is a straight-ahead, rapid-running machine. At 7’8” the Thunder rolls in with a semi-planing hull and a long waterline. A fat stern carries more volume than the sleek bow for easy rolling and lots of packing space behind the seat. It’s a stable and comfortable boat that will find a wide range of duty and will fit almost anyone.

Riot cockpits evolved in 2005 with the release of the Magnum, Orbit, Inferno and Nitro. Since then, each cockpit has had the same basic shape, but size varies depending on the boat’s purpose. “This means creek and river-running kayaks like the Magnum and Thunder now have longer cockpits than the playboats,” says designer Simon Martin. “The Thunder’s cockpit was also made low around the waist, making the boat easier to roll.” Combined with the convex shape of the deck, it allows water to flow off the stern quickly for better handling in meaty rapids.

The Thunder fits in somewhere between its purebred freestyle and creeking cousins. It’s not a big wave shredder like the Astro; nor does it boof or shed water like the Magnum creeker, but remember, it’s not supposed to.

“We realized the river runners are looking back to longer hulls and are less willing to give up floatation for the sake of playability. It’s as if the river runners’ definition had switched from big playboat to small creeker.” Martin said. So with input from Arnd Schaeftlein and other Riot team paddlers, Martin stirred around ideas for a fast and forgiving river runner.

What it’s supposed to do is run rapids, and it’s very good at it. It holds a line, punches reactionary waves, eats big ferry moves and inspires confidence. The pointy bow and strong hull speed make it a straight-ahead charger.

I tested the Thunder on low-volume easy creeks, big-wave play runs, beefy class IV and taught beginner courses in it. It was equally at home each day. This is liberating as a paddler after years of having to carry a quiver of boats.

For those who are new to river-running boats, or have only paddled play and creek boats, here are some hints on how to make the Thunder roll. The active edge lies just behind the seat, making for incredible stability and at first a lazy-feeling boat on eddylines. I learned to harness that edge by waiting a little longer to carve turns and sitting a little lower on a surfing wave for rock-solid stability. It takes a little more eddy to turn the Thunder and instead of boofing the long waterline I just charged off the lip down-river style.

“Driving” this boat is super fun; it really moves and responds to decisive paddling in stiff rapids. On the instructional scale, any beginner student could jump in the Thunder and make it bolt.

Jeff Jackson is a whitewater kayaking instructor and professor of outdoor education at Algonquin College in Pembroke, Ontario. 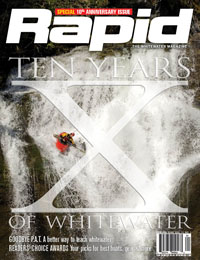