Over 100 years ago, the first Old Town canoe was built along the Penobscot River in Old Town, Maine. More than a century later, some of their oldest boats are still on the water and Old Town has grown to become one of the most storied canoe and kayak makers in America. Whether you paddle recreationally, fish the local farm pond or chase tournament victories, Old Town has a kayak to make your experience unforgettable.

The Old Town Vapor 10 kayak and Vapor 10 Angler are recreational sit-inside styles, which means the cockpit is partially enclosed by the kayak deck. This is a popular style for recreational kayaks as it provides a comfortable and supportive seat and the deck keeps water from splashing into your lap while paddling.

The drawback to a recreational sit-inside kayak—versus a sit-on-top—is that if the kayak tips over or swamps, it will fill with water. Rather than simply climbing back aboard as with a sit-on-top, the paddler will need to swim their kayak to shore and empty the water before continuing on their way.

The Old Town Vapor 10 kayak is intended for use on slow-moving rivers, smaller lakes and other sheltered waterways that are not exposed to strong wind, current or waves. It’s perfect for novice and casual paddlers, families and anglers, and the large cockpit makes it a good choice for those with mobility limitations that can make using a kayak with a more confined cockpit difficult. The spacious cockpit, stable hull and plenty of volume in the bow also make the Vapor 10 ideal for paddling with your pet.

As its name suggests, the Old Town Vapor 10 is 10 feet long, putting it on the shorter end of the recreational kayak spectrum. This makes it relatively lightweight and easy to store and transport. Look to the  Vapor 10 angler and recreational kayaks if you’re seeking comfort, stability and maneuverability for exploring calm waterways, and want a compact and capable kayak that doesn’t break the bank.

If this sounds like you, keep reading for a comprehensive Old Town Vapor 10 review.

On the water with the Old Town Vapor 10

The Old Town Vapor 10 offers new paddlers and kayak anglers reassuring stability thanks to its wide, flat hull and rounded, high-volume sidewalls. These allow the Vapor 10 to tilt from side to side without feeling tippy. Despite the Vapor 10’s compact, 10-foot length, this is a deceptively spacious boat with a weight capacity of 325 pounds, which further adds to its feeling of stability.

The Old Town Vapor 10 features a buoyant, wedge-shaped bow that cuts through waves and wind chop, making for a drier ride. This is paired with a pronounced keel (central ridge that runs down the center of the hull) and built-in skeg (where the keel becomes a deeper fin at the stern of the boat). These features help with tracking, which is a kayak’s ability to maintain a straight course with minimal corrections.

Every aspect of kayak design involves a trade-off of some kind. For example, too much tracking and a kayak becomes hard to turn; too little, and trying to paddle straight becomes a frustrating exercise of weaving and correcting. Fortunately, kayak designers have found many different ways to finesse a kayak’s shape so it remains fun to paddle in a variety of conditions and situations. Another tool designers use is called rocker.

Rocker describes the upward curve of a kayak hull at the bow and stern. Comparing kayaks to fruit, lots of rocker looks something like a banana. The Old Town Vapor 10 has minimal rocker in the bow and a little more in the stern. This assists with maneuverability by allowing the stern to release from the water, giving the Vapor 10 a good balance of efficient tracking and easy turning. It also makes paddling and fishing rivers with small riffles and class I rapids feasible and enjoyable in the Vapor 10.

The Old Town Vapor 10 and its sibling, the Vapor 10 Angler, are 10-foot recreational and fishing kayaks suitable for use on sheltered waters such as smaller lakes and slow-moving rivers that are not exposed to strong wind, current or waves.

The Old Town Vapor 10 sit-inside kayak is a great fit for novice and casual paddlers, families and anglers, and the large cockpit makes it a good choice for those with mobility limitations that can make using a kayak with a more confined cockpit difficult. The spacious cockpit, stable hull and plenty of volume in the bow also make the Vapor 10 ideal for paddling with your pet.

About the Old Town Vapor 10

The Old Town Vapor 10 angler and recreational kayaks are constructed of high-density polyethylene (HDPE), which is a durable and cost effective plastic for kayak production. The affordability and toughness of this material make it the most popular choice for recreational and fishing kayaks.

Old Town uses both single-layer and triple-layer polyethylene in the construction of their recreational kayaks, with the latter offering the highest durability and resistance to warping, denting or cracking. As you’d expect, three-layer construction commands a higher price, and the budget-friendly Vapor 10 uses a lower cost single-layer build. Even so, many Vapor 10 users report their kayaks are still going strong after more than a decade of heavy use and abuse. 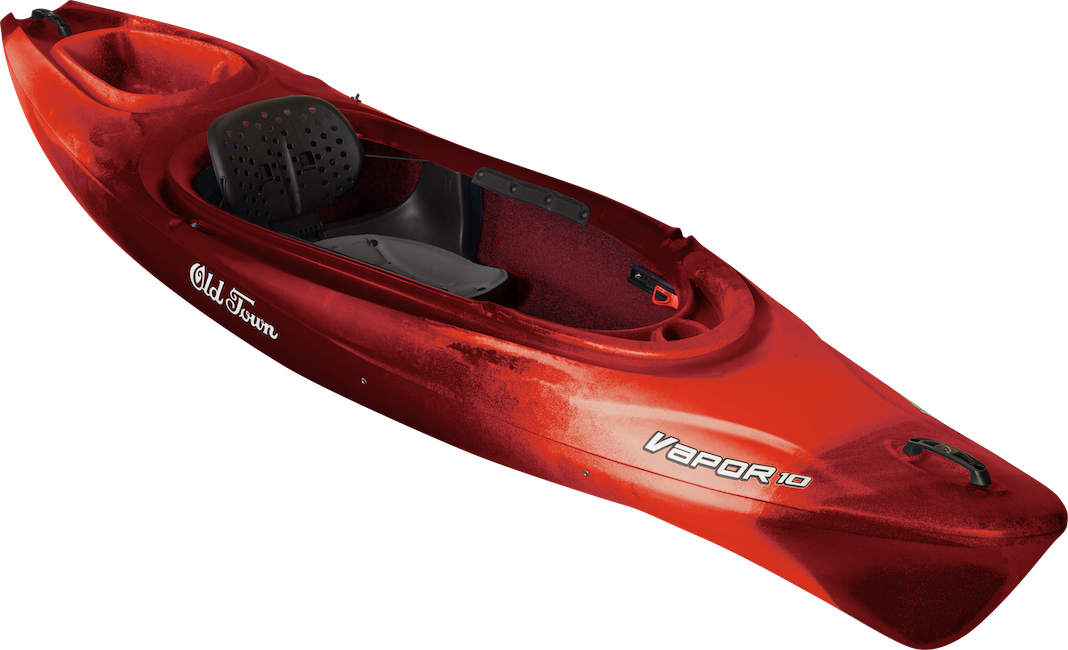 Compared to the Old Town Vapor 10, the Angler edition adds two flush mounted 10 rod holders. The rod holders provide ready storage of two setups, so you can be rigged and ready to cast. The Vapor 10 Angler also has deck bungees on the bow for stashing smaller items, and an anchor trolley system.

The cockpit of the Old Town Vapor 10 angler and recreational kayaks focuses on comfort and easy accessibility. At 48 inches long by 19.5 inches wide, it’s easy to enter and exit the Vapor 10, and there’s plenty of space for gear, or even a furry friend, between the paddler’s legs. The elongated cockpit also lets you raise your knees if that position feels more comfortable, and provides room to reach for items you’ve stored inside the bow.

The cockpit rim of the Old Town Vapor 10 features a recessed tray and cup holder. This tray is handy for both anglers and casual paddlers, with space to prepare your rig, store tackle or stash snacks. There’s also a built-in paddle holder at the front of the cockpit where you can secure your paddle to leave hands free for taking a photo or making a cast.

If you would like to keep the cockpit of your Old Town Vapor 10 sealed from rain and other elements during storage and transportation, you may want to pick up a cockpit cover. Cockpit covers are made of nylon or neoprene and provide an inexpensive way to keep creepy crawlies out of your kayak when not in use. Check manufacturer sizing before purchasing to ensure the cover fits. One great option is a Seals size 7 nylon cockpit cover.

Inside the cockpit, the Old Town Vapor 10 features sliding adjustable foot braces. These foot braces allow incremental adjustments to find a comfortable foot position. Properly fitted foot braces are critical to ensuring good posture and efficient power transfer through your paddle strokes, reducing fatigue and allowing you to paddle further. Thigh pads along the cockpit rim enable you to brace your knees and thighs inside the kayak to provide additional points of contact, helpful with stability and boat control.

Recent Old Town Vapor 10 kayaks benefit from a seat upgrade that is much more comfortable than seats found in earlier versions of this boat. Old Town’s new Comfort Flex seat offers plenty of padding and a supportive, adjustable backrest to accommodate a wide range of users. The best way to know if the Vapor 10 seat is comfortable for you is to sit in the boat and try it out.

The designers also included a drain plug that makes it straightforward to empty any water that has splashed or dripped into the kayak while paddling. Always check that the drain plug is closed and lightly hand tightened before launching.

Where many recreational sit-inside kayaks have a covered stern hatch for storage, the Old Town Vapor 10 borrows from fishing kayaks with an open rear tankwell. A tankwell is a recessed storage area molded into the deck of the kayak. The Vapor 10 tankwell provides more accessible storage than a closed hatch, but as a fishing kayak this is an outfitting element where a sit-inside kayak’s storage opportunities are limited compared to the wide-open on-deck storage space of a sit-on-top kayak.

For those who would prefer a covered storage area behind the seat, Old Town offers a stern hatch kit that transforms the stern tankwell recess into an enclosed hatch. The hatch kit is installed with rivets, and operates on a hinge.

Users have had mixed reviews about this Old Town Vapor 10 hatch upgrade. The hatch is not watertight, so even with enclosed storage you have to pack your gear in dry bags. As a kayak angler, enclosing the hatch also reduces usable on-deck space for a cooler or other bulky items.

Another modification available directly through Old Town is a folding anchor kit. The Old Town Vapor 10 Angler anchor attaches to the trolley line running around the stern half of the Vapor 10 Angler. Dropping anchor gives you an opportunity to sit still while fishing in mild current or windy conditions.

For both the hatch kit and anchor kit, Old Town provides pop rivets to install the systems to the Vapor 10 and other Old Town kayaks. This may seem like a simpler choice than a screw or bolt fitting, but keep in mind you’ll need a way to install the rivets. Also, this method does not allow for re-tightening if the hardware becomes loose over time.

Kayak anglers seeking a trolling motor are advised to search YouTube for DIY videos from other anglers and Vapor 10 users. In short, anything is possible, but there is no one-and-done kit to motorize your Vapor 10 kayak. Old Town does offer a Minn Kota powered Sportsman fishing kayak that’s ready to go off the shelf, but it’s a major investment at nearly $3,000.

The hull and deck of Old Town kayaks are covered by a limited lifetime warranty. This is a serious step up from the 1- to 5-year warranties you’ll find on many other budget boats found at big box stores.

The Old Town Vapor 10 is far from being the only choice for an entry-level recreational or fishing kayak. Nearly every major recreational kayak manufacturer offers a comparable 10-foot sit-inside kayak, and there are a number of other options within the Old Town lineup itself. Here is a look at how the Vapor 10 stacks up against other models.

Where to buy the Vapor 10

Old Town kayaks are available at specialty paddlesports shops and a number of large retailers across North America. Try searching the following retailers, and check availability before making a trip to purchase the Old Town Vapor 10: