The Ascend 10t is a sit-on-top fishing kayak with a host of useful features geared toward anglers. The elevated seat, standing platform cockpit and large tankwells leave no question this boat was built to chase fish.

What makes the Ascend 10t stand out within a sea of fishing kayaks? It incorporates an elevated seat and a platform-style cockpit, which we will discuss further below. These design features are commonly found on kayaks much more expensive than the 10t. That being said, the 10t does have a higher price tag than some other fishing kayaks available at large retailers.

So, is the Ascend 10t worth it? We’ll try to help you answer that in this Ascend 10t review.

On the water with the Ascend 10t

What are anglers looking for in a kayak? Often it’s the ability to get where conventional motorized boats can’t, without sacrificing storage space or stability for casting. There’s also the appeal of skipping out on the hassle of owning a motor boat, and the chance to turn everyday fishing into a bit of an adventure. With this said, let’s talk performance and the Ascend 10t kayak’s stability.

The Ascend 10t sit-on-top kayak is built on a tunnel hull. Tunnel-hulled kayaks are generally wider than other kayak hulls. Think of a tunnel hull as a pontoon boat or catamaran. There are essentially two rounded hull surface areas bridged by the center of the kayak. The dual, rounded surface areas provide reliable initial and secondary stability. These tunnel hulls are especially popular with fishing kayakers for the stable platform they provide.

The tunnel hull enables the Ascend 10t’s standing platform area. What do I mean by standing platform in a kayak? It’s when the floor of the cockpit is an open, flat area, rather than being scooped out for a footwell. This gives a kayak angler the opportunity to sight fish and increase casting ability. It’s a next step up in the fishing capability of a kayak.

The Ascend 10t features this open standing area. But the 10t dimensions are worth looking at when assessing the stability of the kayak. The 10t is 10 feet long and 30 inches wide. In comparison to other fishing kayaks with a standing platform, the 10t is on the small side. For this reason, inexperienced paddlers may find the 10t feels unstable when it comes to standing.

The Ascend 10t is a sit-on-top fishing kayak. Sit-on-top kayaks are kayaks where the paddler is not enclosed at all. They sit on the deck of the boat, which has been molded for an exterior seating position. This is in comparison to a sit-inside kayak. A sit-inside kayak is one where the paddler slides into the cockpit of the kayak. They may also wear a sprayskirt to cover the cavity of the cockpit. Sit-on-top kayaks have become popular for fishing kayaks because of their ease of entry, open storage and easier rescue scenarios in the event of a capsize.

The Ascend 10t kayak was designed specifically with the kayak angler in mind. The elevated seat position and tunnel hull make the 10t less about covering water as a paddler, and more about comfort and stability.

This kayak is best-suited for slow-moving rivers, lakes and sheltered coastal waterways.

Beyond rod and reel action, kayaks like the Ascend 10t can also be used for hunting. With the Ascend 10t, duck hunting is well within scope. The open cockpit design and large tankwells are conducive to carrying decoys, setting up a shotgun rack or even bringing along your bird dog.

About the Ascend 10t

The Ascend 10t is constructed of high-density polyethylene. Polyethylene is a plastic commonly used in kayak manufacturing. This polymer compound is also regularly used to make other common plastic goods like milk jugs and shampoo bottles.

Ascend produces the 10t through a rotomolding process. Small plastic pellets are loaded into a mold. The mold is then placed in a large oven at high temperatures and rotated at a speed, pushing the liquified nurdles outward so they spread and take the shape of the mold. While the mold is pulled from the oven it continues to rotate as it cools. When the mold is opened, presto we have a kayak. Rotomolding is one of the standard production processes in the industry for producing durable kayaks.

One of the most obvious elements of the Ascent 10t is the amount of open storage.

This starts at the bow, where the Ascend 10t has a roomy forward tankwell. Tankwells are storage areas molded into sit-on-top kayaks. The tankwells of the 10t have plenty of space for storing tackle and drybags for a day on the water.

On the floor of the forward tankwell there are four metal D-rings. These rings provide tie-down points to secure your gear. Many fishing kayaks commonly include bungee cords pre-installed on a deck rigging system. On the Ascend 10t you have to run your own bungee, or other type of cord. I do not see this as a disadvantage, but rather a blank slate. The D-rings provide good anchor points to run the length of cord you choose.

Another thoughtful design element of the Ascend 10t’s front tankwell is the cut-out where it meets the cockpit, allowing water splashing over the bow to drain out into the floor of the cockpit, where it will exit via the scupper holes.

The cockpit of the 10t Ascend kayak is an open concept, with an overall flat surface, covered with traction padding. This deck mat and flat surface allows kayak anglers to use the floor of the cockpit as a standing platform. A standing platform increases your ability to cast, sight fish and move around the deck.

Also within the cockpit of the Ascend 10t are sliding foot braces. Sliding-style foot braces provide more positions than molded-in footwells. They do, however, require you to reach down toward your feet if they need adjustment on the water. Foot braces are an important part of a kayak’s outfitting because they provide a point of contact with your kayak. This gives you more leverage for paddling strokes, and more control over the kayak.

At the center of the cockpit between the foot braces there is a small dry hatch for storage. This hatch is sealed with a threaded deck plate. The hatch is a good place to store small items.

On the floor of the cockpit you will see four scupper plugs. Why exactly are there holes in the bottom of the kayak? These scupper holes are there to let water that enters the boat drain out through the floor. This keeps the cockpit of the kayak from filling with water. The Ascend 10t has six scuppers in total. Four are in the cockpit, and two in the rear tankwell.

The seat of the Ascend 10t fishing kayak is an elevated, lawn-chair-style seat. It has a mesh construction, with some padding under the butt and on the back. The raised seat provides a more natural posture and sitting height.  An elevated seat also increases visibility, and keeps you off the wet floor of the kayak.

The Ascend 10t kayak seat has a unique track system. Near the hinge on each side of the seat are small plastic blocks. These blocks slide into an enclosed track, rather than resting on top of a track. This keeps the seat from bouncing up off its position, but also means if you want to move it out of the way you must slide it forward, rather than just folding upward. This is not necessarily an advantage or disadvantage. It does make for a specialized system, though, creating difficulty for any Ascend 10t seat upgrade.

One area of concern cited by users of the Ascend 10t is the seat’s vulnerability to rusting. A rusted out elevated seat would render the kayak relatively useless until you have a replacement seat.

The area around the cockpit of the Ascend 10t also features pre-installed accessory tracks, on either gunwale near the knees. This provides a place to easily mount electronics on your 10t such as a fish finder or camera. It’s a simple pre-installed add-on, but saves time and money for a kayak angler who wants to have a boat ready to launch the day of purchase.

Behind these accessory tracks and closer to the seat, the Ascend 10t includes two carry handles. These handles are in great positions if you need to hop out of the kayak and perch it on a shoreline. The handles can also be helpful if you fall out of the 10t and need to climb back in. The included grab handles within the cockpit are in a great spot to aid in standing up or sitting back down in the seat.

Near the stern of the Ascend 10t is another large, recessed tankwell. This tankwell is elongated and rectangular, and can accommodate a small cooler or milk crate. There are also two scupper holes for drainage under the tankwell.

At the stern you will find the drain plug. The drain plug allows you to empty any water which has entered the interior of the hollow hull of the Ascend 10t. How can water get inside a sit-on-top kayak? Water ingress can occur at seams, screw holes or places where the hull has been cut for exterior components. It’s not uncommon to get a small amount of water inside your kayak, and you should drain it at the end of your trip.

Kayak anglers are known to seek out upgrades to their paddle craft. One common upgrade with this model is an Ascend 10t seat raise.

The seat of the Ascend 10t is already elevated. If it isn’t high enough, check out DIY videos of how other anglers have mounted rails on the deck of the 10t to further raise the seat height.

Before you go installing new rails on the Ascend 10t and making a lifeguard stand out of your kayak though, spend some time in the 10t as is and consider if a seat raise is actually needed. The higher the seat, the higher your center of gravity. Translation: you lose stability. When the water gets rough you may appreciate the opportunity to be sitting a little closer to the boat.

Another easy add-on is a forward, swiveling rod holder.

The Ascend 10t only has the two built-in rod holders behind the seat. You may want a rod holder directly in front of you for when you are actively fishing. Thanks to the pre-installed accessory mounts, this is as simple as picking up a rod holder to slide on. Ram and Scotty are popular brands to check out for these components.

When making modifications to the Ascend 10t, consider that a paddle holder is not included on the deck of the kayak. This is a simple, cheap, yet extremely helpful upgrade to secure your paddle while fishing. You can make some extreme modifications to your 10t, but little details like adding a paddle holder will make a huge difference in your experience.

The Ascend 10t is a stable, pontoon kayak which could accommodate a trolling motor. There is no trolling motor available directly from the manufacturer, however. Anglers looking to motorize their 10t will have to fashion a DIY-driven, after-market installation of a trolling motor for the 10t.

The Ascend 10t finds itself in a crowded class of fishing kayaks. Here are a few regularly compared with the 10t.

Carry A Waterproof VHF Radio, Use Your Phone Only As A Backup 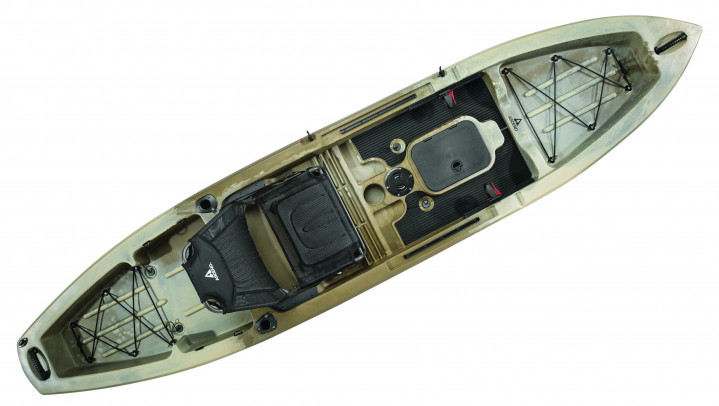 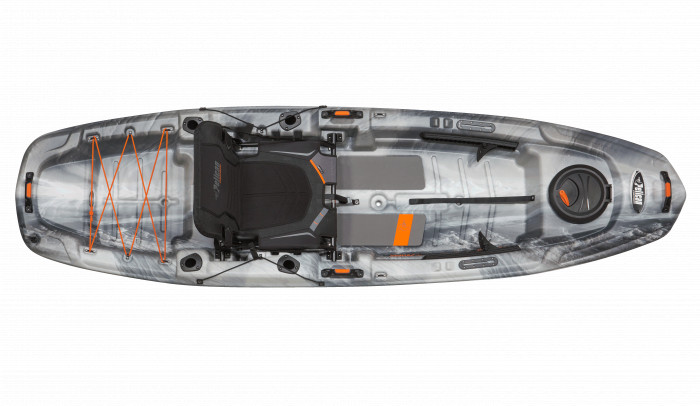 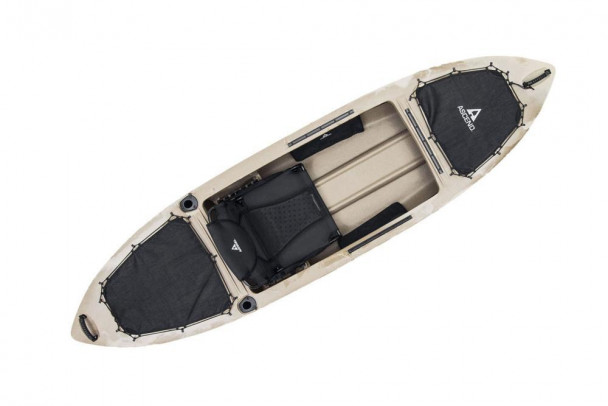 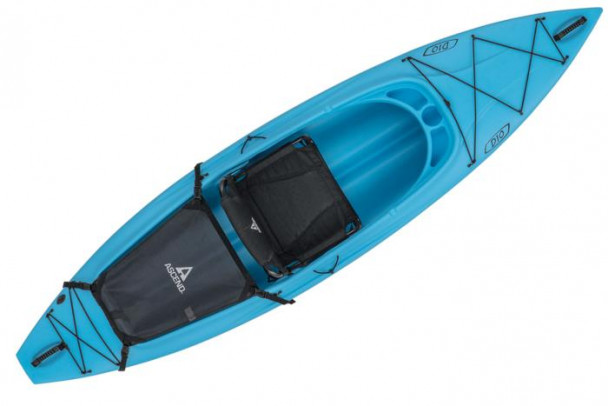 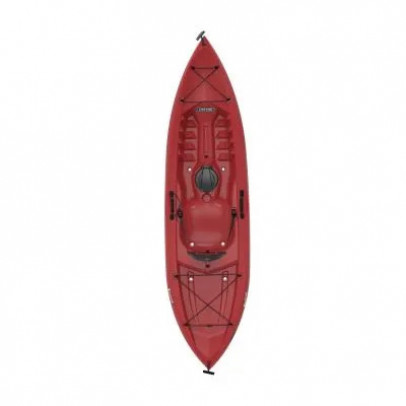 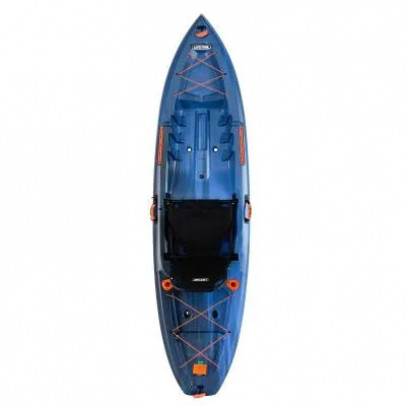 Where to buy the Ascend 10t

Where can you find the Ascend 10t available for purchase? Bass Pro and Cabela’s carry the 10t. You will also find Ascend kayaks available at a limited number of smaller local boating stores that carry White River Marine Group brands. 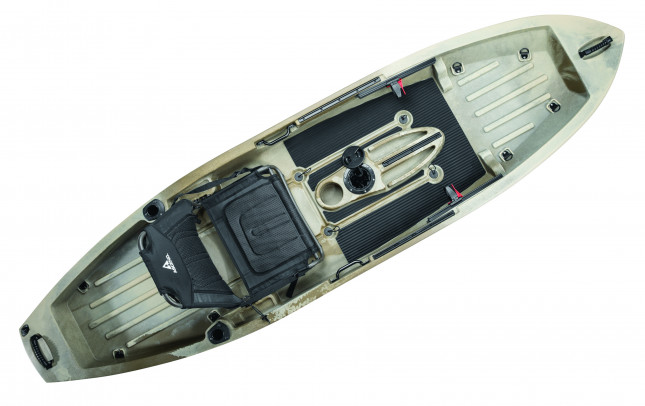 Everything You Need To Know...