Jordan River is located on the west coast of British Columbia, 70 kilometers west of downtown Victoria on Vancouver Island.

It was established back in the 1880s as a logging camp but I was there with James Manke and the Stohlquist WaterWare team because it is now more commonly known for challenging surf.

Unfortunately, the exciting surf that we anticipated for the shoot did not materialize that day. We looked for other ideas.

One option was to shoot down from a bridge looking for graphic shots of colorful kayaks and gear against dark blue water.

Between the bridge and a hydroelectric powerhouse is a raw log sorting facility. With the logs grouped tightly together they provided an interesting design. I asked Lee Richardson, not expecting that he would agree, to paddle through the gaps in the logs. Lee paddled toward the gap and upon reaching the opening lifted his paddle letting his momentum carry him deep into the pile.

Neither of us realized he wouldn’t be able to paddle his way out. The aisle was not wide enough between the side of his kayak and the logs to get a solid purchase on the water. Instead he was able to safely shuffle his way out gripping the logs with his hands.

[ Also read: How Action Camera’s Changed The Way We Paddle ]

Meanwhile, I had to keep an eye out for the full loaded logging trucks rumbling toward the bridge as there was not much of a shoulder from which to shoot.

I had with me a 600mm lens on a Canon EOS-1D X and a 50mm f/1.2 lens on another Canon ESO-1D Mark IV body. I chose to shoot with the 50mm to show more of the environment, which I think is the most interesting part. I did however go with more depth of field because of the distance to the subject and because of the advice from Canadian Press photographer Darryl Dyck who suggests in these types of scenarios I give myself a little more room and shoot at an aperture between f/5.6 and f/11.

Over the past year I have learned much more about shooting kayaking but the lesson I learned here is: If you think something is impossible and you don’t ask, it is. 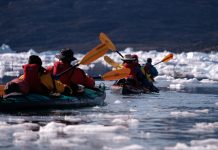