Thirty-one years ago, the first Gull River Open Canoe Slalom Race took place at the Minden Whitewater Preserve in Ontario. Since then, the event has become a classic, serving as a model for engaging new paddlers and growing grassroots participation, all while retaining top-level competitors.

Whitewater canoeing groundbreakers Wendy Grater, Fred Loosemore, George Drought, Jim MacLachlan and Maureen Bretz founded the event. “At the time, you could only race on a gated course at decked-boat slalom events,” says Bretz. “We felt there was a need for a slalom event just for open canoes.” During the first few years, 17-foot tandem tripping boats with truck in- ner tubes for flotation dominated the river. “There were almost no dedicated solo boats,” recalls Bretz.

Slalom canoeing rewards both strength and experience. This led to the addition of a Master’s class during the race’s second decade, for the growing set of men over 40, tired of being outdone by the young summer camp guides, home after a season on the river.

In 2003, the category was expanded further. “The first year I was coordinating the event, we introduced a solo class for Women’s Masters,” says then race director and medalist, Beth Kennedy. “There were only a handful of paddlers that first year but the class has since grown to the same size as the Women’s Solo category.”

Last year—the event’s 30th anniversary—a new category was added once again, as aging race organizers vied for glory and hardware. The Legend’s class gives men and women over 55 a break from the now crowded Master’s class. Before the introduc- tion of the Legend’s category, the same boaters consistently won the Master’s. “The over 40 class was starting to get crowded, with most of the best paddlers now qualifying for that category,” says longtime competitor, Peter Farr. “It’s great to be able to race in the Legend’s class where there’s room to move up the standings.”

The Gull Race has also evolved into a family gathering. The Solo Men’s, Women’s and Junior’s classes consist of a range of paddlers from North American champions to those who dust off their canoes for their third or fourth run of the season. The Junior–Senior Tandem class usually consists of proudly grinning parents paddling with their children, like Rapid publisher Scott MacGregor and his son, Doug. “Racing with Dougie is the most fun I’ve had at the Gull,” says MacGregor. “We started racing together when he was four.” Doug’s medals hang on his bedpost all year long.

As modern whitewater open boating matures, so do pioneers like Bretz who continues to compete every year. “Where else can you see a competitive, challenging slalom race where the youngest competitor is three and the oldest is in their 70s?” says Bretz. “It serves as a breeding ground for new paddlers, having junior boaters mentored by others.”

With a record number of race starts there is clearly a demand for competitive, family-oriented events like the Gull Race where world-class open boaters race alongside legends in the making.

Mark Scriver enters the Gull Race yearly. While he’s creeping up on Legend status, he also keeps up with his sons. For more info on the event, visit www.whitewaterontario.ca. 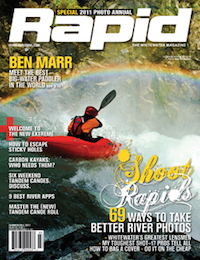 This article first appeared in the Summer/Fall 2011 issue of Rapid Magazine. For more great content, subscribe to Rapid’s print and digital editions here.