It wasn’t until the tenth day of the expedition that it happened. The canoe was sideways; my paddle could only reach air. All I could see was the icy rapids of the water below. Ken, in the stern of my canoe, was screaming at me. Was this it? Was I finally going to dump the canoe? Was my camera gear going to go floating down the river? All the fears that the team had about having an inexperienced paddler on a remote wilderness trip were about to come true.

Ten days before I almost brought about catastrophe; a storm was raging in the small town of Fort Simpson in Canada’s Northwest Territories. Our rag tag group of six travelers had arrived 24 hours before in preparation for the 14-day exploratory canoe trip down the Little Nahanni River. Sponsored by Parks Canada, our aim was to scout the river and create a guidebook, turning the intense 85-kilometer route into the next must-do whitewater canoe destination of the north. It’s everything a river tripper could want: fast crystal water, thrilling rapids, looming canyons, wildlife sightings and remote landscapes. Also, maybe a couple things you don’t want, such as lack of beta, high consequence drops and, at the time, seriously terrible weather.

Located about 60 kilometers northwest of its more famous counterpart, the Little Nahanni River runs through two national park reserves that border each other: the famous Nahanni National Park Reserve and little known and recently created Nááts’ihch’oh National Park Reserve. Combined, the two reserves cover an area of almost 40,000 square kilometers, larger than the country of Ireland. 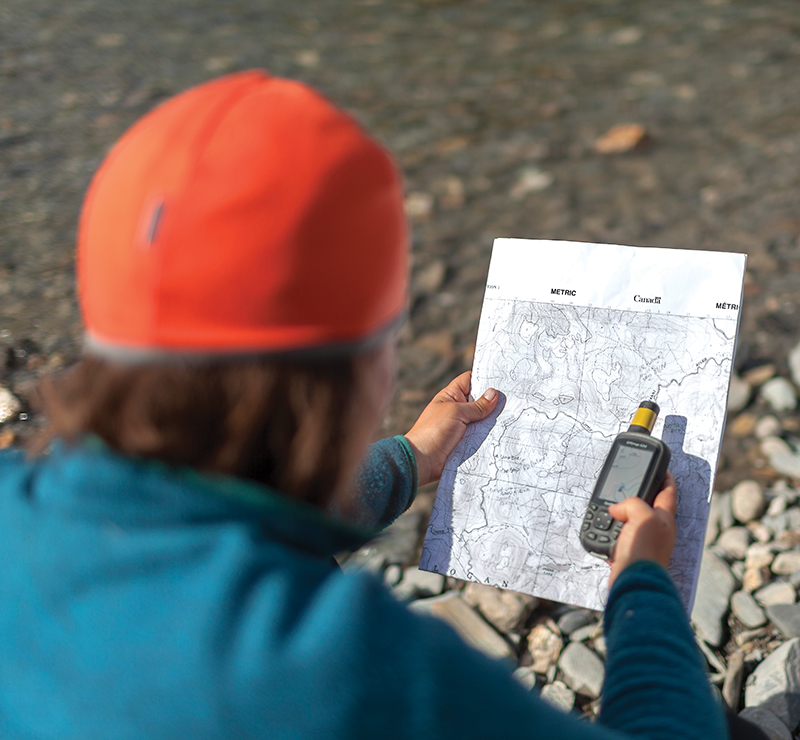 Until now, fewer than 10 paddlers have descended the river each year. Most have been doing so with very little beta.

“We knew that people had paddled the river, but there was very little information available,” says Lyn Elliott, our trip leader from Parks Canada. “It’s a technical beast, so the goal was to collect enough river information so that more paddlers can enjoy it. And there’s only one way to get that—by paddling the river.”

Prior to the trip, Lyn scoured online resources to find more on the Little Nahanni. She got in touch with half-a-dozen paddlers who had run the river over the past few decades. One paddler, Mike Fischesser of North Carolina, paddled there in 1987 and recalled being given a hand drawn map by a friend at the time.

“He drew a line on a piece of paper and said, ‘I think there’s a rapid there,’” Fischesser says.

“That’s the scope of the information they went down the Little Nahanni with in the ‘80s. Despite all my research and interviews, I didn’t feel like we had much more tangible information almost 30 years later,” says Lyn.

Everyone else had an air of confidence I didn’t share. I was cleanly shaven, with a short crew cut and gelled hair, sporting my shiny new Bergans gear I’d received specifically for the trip. 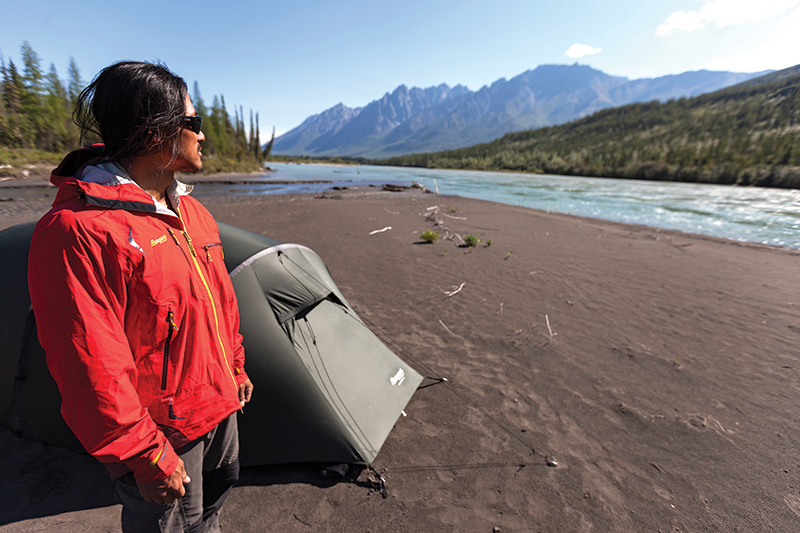 My paddling background equated to flatwater canoe trips with Scouts in my early teens. The only reason I was here was because my photography portfolio had impressed Lyn enough to ignore my lack of paddling skills. Having worked in conflict zones as a photojournalist, I figured I’d be able to handle a little canoe trip, but looking at my companions I started to think I had made a mistake. I knew nothing about whitewater paddling, little about tripping, and the journey down the Little Nahanni’s almost constant class II to IV rapids would be my first expedition.

Before we set off, Lyn had reviewed Hans Baer’s trip journal, one of the first known paddlers to have descended the Little Nahanni in 1972. In one particular entry, Baer’s party had just arrived at the Little Nahanni, and met a couple men from the local tungsten mine. Baer wrote:

“A young chap who stopped by for a while inquired what we were up to. He was very pessimistic about our Little Nahanni adventure and told us that he had heard of parties trying to get down the river, but apparently all of them had come walking back up, and he knew of nobody who had actually made it. Also, he thought that nobody had tried it this year. Well, this didn’t sound too encouraging.”

I couldn’t help but agree.

The best time to paddle the Little Nahanni is from mid-June to mid-August. Plan for eight to 12 days. Thanks to this trip, Parks Canada’s trip planner includes GPS points for rapids and points of interest. Campsites are a mix of rocky shores and sandy sites. 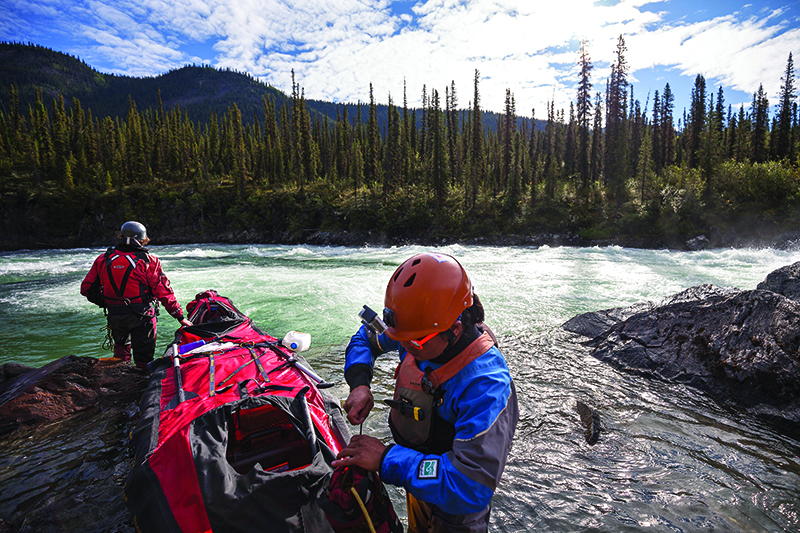 There are two main ways into Nááts’ihch’oh National Park Reserve, either a floatplane from Fort Simpson, or a six-hour drive from the nearest gas station in Watson Lake, Yukon. Those who choose the latter route must bring extra fuel for the trip back.

Catching a lull in between storm cells, we descend under a steely sky to Flat Lakes and the Little Nahanni River valley. None of our party of six saw a thing however—the pilot had to fly high above an oncoming storm for visibility and the oxygen level in the unpressurized plane dropped enough to cause all of us passengers to fall unconscious. The resulting headache was unbearable, and I went straight to bed that evening while the rest of the team feasted on celebratory steaks—including mine.

The remoteness of this river means there’s no easy way out. I was especially aware of this on our first morning in camp as I received a lesson on how to prep the canoes and we discussed safety.

With us Lyn had brought a copy of Baer’s 1972 trip report. Paddling downriver in fiberglass boats, Baer’s journal details the extensive repairs required after one boat cracked its keel in a set of rapids. The team repairs it enough so it could limp along, but had to pull off the river to fire up a stove, melt resin and stage repairs. The group is lucky that they had already paddled through the most difficult section of the river.

The third day on the water we reached the Little Nahanni. The weather hadn’t been in our favor so far. Rain and hail pelted our faces and helmets, as well as the spruce trees around us. Droplets bounced high off the water. The spray from the class III rapids we navigated was frigid. 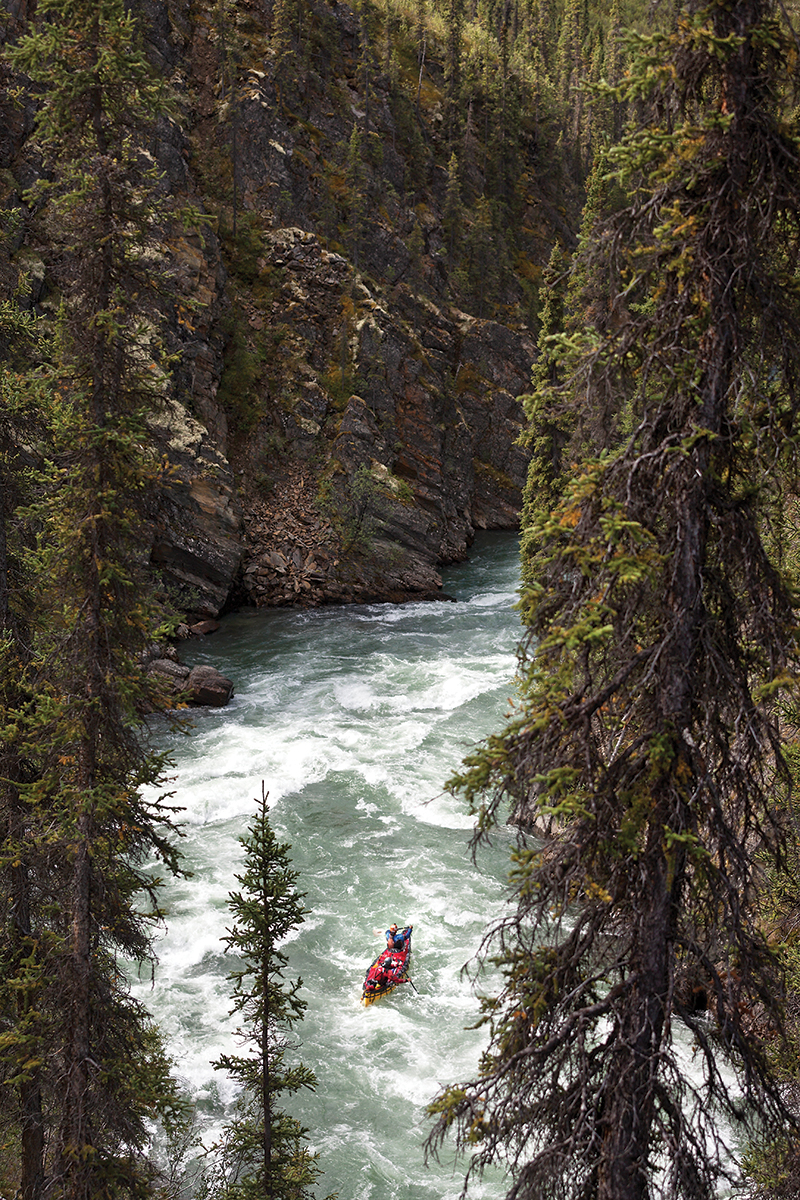 I paddled in the lead boat with Ken MacDiarmid, our best paddler. The arrangement suited me just fine. At a lunch break one afternoon, fellow photographer on this trip, David Lee, turned to me.

“That was pretty intense, eh?” he asked about the previous set. I looked at him in surprise.

“It was? I don’t know. I have nothing to compare to this,” I replied. Being in the lead boat I never knew what was coming, had little understanding of what was required and just did whatever Ken yelled at me. The other boats followed ducky style, more or less oblivious to the chaotic canoe that led them downriver.

Most nights we camped on rocky shores. On the odd day we were lucky to find huge sand bars to rest our heads. Each evening, Lyn transcribed her notes from the day, noting the class of rapids, obstructions and tips for navigation, as well as marking GPS waypoints on a series of topographical maps. Then she’d pull out Baer’s notes to see what the following day might have in store.

By day seven, the rain had seldom stopped for more than a few minutes at a time. It was late in the afternoon when the shoreline peeled away sharply into a high rock face, the water sped up, and the river darkened and disappeared as it dog-legged around a canyon wall. Ken eddied out. “We’re here,” he told me.

With constant class III and IV rapids throughout the two-and-a-half kilometers, Crooked Canyon is considered the most challenging section of the river and was the only area Lyn wor- ried we would have to portage around. We had heard about the brutal portage and none of us were keen to repeat that suffer-fest. 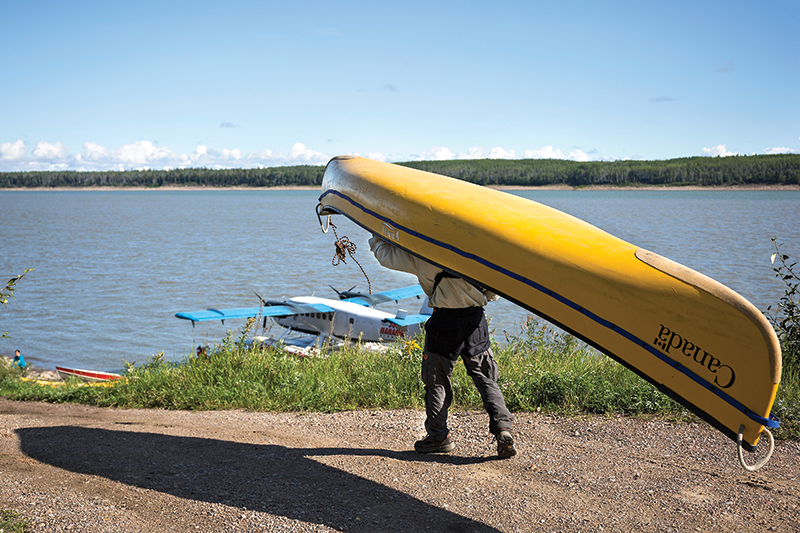 Fortunately, Ken and fellow guide Pablo decide they’ll paddle the canyon with our gear the following morning, leaving us to hike the portage and allowing me to get awesome bird’s eye photos of the canyon run. Ken and Pablo were halfway through the canyon when the sun finally came out and breathed new life into all of us.

After a week paddling together the six of us seemed like a strong team. I even felt like I’d learned a bit. With just a handful of comparatively easy rapids left I almost ruined it all. My mind wandered. I didn’t notice the river increasing in intensity. At last, Ken’s frantic yells to paddle woke me from my dreamlike state.

I plunged my paddle ahead expecting the weight of water—instead, only air. Searching for leverage with my blade, I leaned out over the gunwale, throwing the boat’s balance into chaos. On the verge of swamping, a moment of unwelcome clarity reminded me of the thousands of dollars worth of camera gear hidden just under my spray skirt.

“You stay in this damn boat,” Ken screamed at me. We completed the wave train with our canoe almost on its side, me barely hanging on, gun- wale partially submerged under the frothing water. Ken wasn’t impressed with our style. 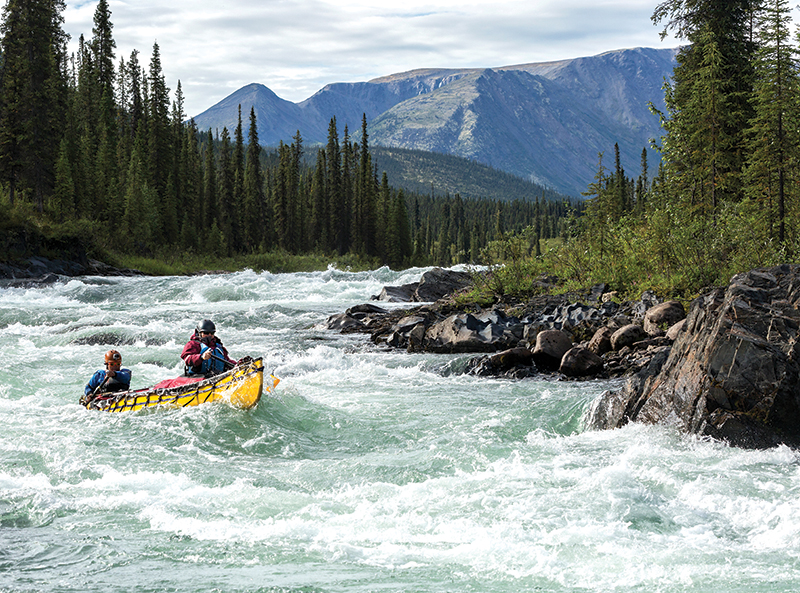 From there it was an easy three-day float to Rabbitkettle Lake, where we waited for our floatplane. Many people begin their Nahanni River ad- venture here, and Virginia Falls—at 300 feet tall it’s twice the height of Niagara Falls—is just a four-day paddle away. Around the camp stove that night Lyn deemed our mission a success—she was sure our team had gath- ered enough beta to make this tough little river safer and more accessible for future paddlers.

Seven months later, Parks Canada digitally published a 48-page guide- book for would-be paddlers of the Little Nahanni River. I reviewed my copy in the comfort of my home. Towards the back, emblazed in 30-point font above a tandem canoe crashing through a wave, the text reads: “No place for rookies.”

I think they’re talking about me.

After his career as an elite wrestler ended due to injury, Dustin Silvey bought a camera and started taking pictures of everything. He now works as a photojournalist while completing a PhD in medicine.

This article was originally published in Canoeroots, Volume 15 • Issue 3. Read this issue.