The muscular river that begins in the Catskill mountains and consigns itself to the Atlantic Ocean has a storied history of paddling. Before it reaches the sea, the Delaware River flows past the city of Philadelphia, where the American Declaration of Independence was signed—the same year George Washington and his army paddled through ice floes to capture Hessian soldiers and their provisions, helping to turn the tide of the war.

Since the 19th century, innumerable paddlers, hikers and other vacationers have made the Delaware their primary retreat from the modern world. My parents are avid paddlers, even as they begin their ninth decade.

My mother records their trips in a journal she named “River Ramblings,” which chronicles the interesting people and events they encounter, as well the personal reflections that bubble up to the surface on the quietest days.

My parents started with a canoe the year my father retired. He’s always been an ardent angler, but a big fishing boat was never a realistic possibility on their limited income. A canoe was a no-brainer. For over 20 years now they’ve set out on the sinuous Delaware every spring, as soon as the water’s current subsides enough for their aging arms.

Another glorious day on the river, is a frequent refrain in the journal, quoting my father. They reveled in the fluency of the river’s natural beauty, a respite from the static hum and buzz of modern life. There are vignettes of kingfishers and eagles, ospreys plunging from the heights and emerging with trout, and two blue herons fighting over a prime fishing spot in a secluded cove. In addition to the accounts of the numerous perch, pickerel, bass, and carp they caught, my mother describes the three-foot muskellunge that threw the lure before my father could grab the net. He was my mother’s Moby Dick—to this day, she’s still searching for him. 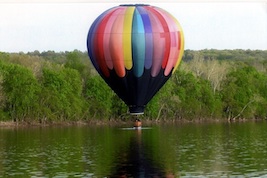 They were as excited by the flora and fauna as they were by the people they met. My mother recounts the time they were surprised by the appearance of a hot air balloon deftly touching down on a placid stretch of the river. She was just about to call 911 before it lifted off again. And of course no paddling trip would be complete without a stop at The Famous River Hot Dog Man, whose kiosk you can sidle up to and enjoy a meal without leaving your canoe. Or if you need a rest, you can take a quick snooze in one of his many hammocks on the shore.

But there are more somber entries in the journal, too. The shock of the terrorist attacks of September 11, 2001 are noted, along with prayers for the loved ones of those killed. Several pages are devoted to the bittersweet migration of my sister and her family to the Midwest, after having lived close to my mother for 20 years of her married life. Memories of taking their grandchildren canoeing with them are recalled, and episodes from my sister’s childhood are celebrated.

The most melancholy entry is my mother’s mention of her diagnosis of breast cancer and double mastectomy at age 70. Yet there is a remarkable quality of equanimity about it, an acceptance that is as uninhibited as the river upon which she regularly drifts. Now a little over two months after surgery and feeling great, she writes, I’m looking forward to a nice warm spring, and to resume paddling on the Delaware. On the river, she’s in a good place.

The allure of paddling is a persistent one. It’s a lifelong, affordable recreation anyone can enjoy because it’s less about brute physical strength than about technique. But as Lance Armstrong would say, it’s not about the boat. The boat is a vehicle, not only for transportation and recreation, but for a return to a natural state we all intuitively know but seem to have forgotten: being near water makes us happy.

Marine biologist Wallace J. Nichols noted in his book Blue Mind that being near water is “the inverse of our current condition of monotonous suffocation.” In our day-to-day lives, we’re over-stimulated and overcommitted—and stressed. Stress isn’t new, of course, but our kind of constant, chronic stress is. “So when you see water, when you hear water, it triggers a response in your brain that you’re in the right place,” Nichols said.

The perk of paddling is that it puts you in the water and not just near it, one with its elemental rhythms. Paddling becomes like a meditation that begins with your body and ends up sending gentle ripples into your mind—it encompasses your whole being. When you’re able to disconnect and let go like that, you’re free to calmly acknowledge even the most terrifying experiences life throws at you. It allows your mind to disengage from them and wander at its leisure, mimicking the whimsy of the river itself. Paddling is the ultimate restorative.

When you set out in a canoe or kayak, luxuriating in the undulating embrace of the water, you can navigate the tributaries of your spirit or simply relish the silence of solitary moments. Whether it’s coping with illness or enjoying convalescence, worrying about the future or begrudging the present, my mother’s journal has shown me that paddling always puts you in the right place.