Surrounded by small wooded islands, we worked our way over deep clear water, swallows swooping low and hungry over our laden canoe. We considered two tree-covered gems before settling on our temporary home. An hour later, tent up and dinner bubbling gently over a healthy fire, an ambition had been fulfilled—canoe camping in one of the last great wildernesses in Europe.

For British canoe campers, like my wife and myself, there are two problems: access and wilderness. Specifically, the lack of either. Though beautiful, our ever-manipulated countryside is busy making a living for someone and guarded jealously. Just to step off the roadside risks confrontation. Fields and woods are tough enough to enjoy, while our rivers and lakes are often all but unapproachable. Canoeists in overcrowded England and Wales can paddle on only three river miles in a hundred. It’s enough to make a paddler cry.

Camping is no easier. While limited opportunities do exist on crowded formal sites, to pop a tent up elsewhere, and close to water, is next to impossible. It’s the same story across much of Europe. The farther east or north you travel the better the wilderness opportunities, but one area stands out, combining beauty, space and unique access arrangements—Scandinavia. Mind you, if you want to use your own canoe, it’ll take some getting to.

To reach our island escape, we’d driven across southern England, caught the Dover ferry to Dunkerque, and glimpsed France, Belgium, Holland, Germany and Denmark before finally crossing Öresund Bridge to Sweden. After pushing our canoe-crested, red van hard through a European tour, we were tired, but nothing could remove the grins from our faces.

Our cheery anticipation was well founded. With a gorgeous coastline, 100,000 lakes and scores of beautiful rivers set within that vast amount of wilderness, we were in paddlers’ paradise. Adding to the glory is Sweden’s allemansrätten, literally translated to mean, “all man’s right.”

This glorious institution, effectively a constitutionally protected right to roam, is enshrined within the very identity of Scandinavian countries, and offers some of the most mature attitudes to access found anywhere in the world. As long as you’re not causing damage, you’re free to walk, bike, ski or camp almost anywhere.

The aim of the trip was simple. To head north along the central E45 that cuts through the heart of Sweden and experience far-flung Scandinavia for ourselves, paddling and camping as we went. The unaccustomed freedom felt good. With no need to worry about reservation schedules or plan routes in advance, we could paddle and pitch a tent wherever we liked. Few places in the developed world offer such a positive and invigorating outdoor experience.

Where do you paddle when you can go anywhere? Only to the most stunning landscapes, of course. Dropping from the jagged mountains that form an impressive natural border, we left Sweden to meet our first Norwegian fiord. Outside of Canada’s Newfoundland province, North America doesn’t offer paddling like this.

With vast towering cliffs diving deep into the ocean, these fiords also offer protection from bad weather, meaning an expedition beneath their craggy precipices is far too good to miss. We set about touching our canoe on as many fiords as we could, covering miles of spectacularly twisty Norwegian coastal roads in the process.

When we’d had enough of the coast (I suppose that’s possible), we turned back to Sweden, a landscape rich in heritage, where much of the roadway is accompanied by the flash of water between birch.

Laisälven River soon caught our eye, at times narrow and swift, more often broad and serene. Struggling upstream one evening at the edge of a lively flow, we called it quits as our bow approached a low, bank-wide waterfall. Tired, we found the only flat land available for our tent, at the corner of a plot near a rare house. Days later, and still feeling guilty, I mentioned this suspected trespass to a fishing shop owner. He seemed surprised by my concern.

“Allemansrätten,” he reminded me. I asked if we could really camp so close, mentioning that we must have been no more than 200 meters from the empty-looking house, technically in their garden.

“No problem,” he replied, “even if lived in.” Pondering for a moment, he added that if the house was inhabited, perhaps anything less than 20 meters might be too close.

A long paddle upstream the next evening found us searching again. Flanking a gentle flow, the forest cover was so dense, the bank so boggy, we could find nowhere to place a tent for miles. Shoulders aching, we eventually came across a tiny space on firmer ground. Pulling ashore amidst a large shoal of hungry trout we pitched our tent, overlooked by towering conifers.

It was only after striking camp next morning, rolling our tent away, that we found ourselves in a ring of stones. These marked a space cleared for a small Sami katta, a traditional tipi-like tent, and had just room enough for our own more modern version. It was hard to tell when the tiny clearing might last have been used, maybe not for decades. It left us with a sense of connection with the original Scandinavian inhabitants.

Lake Sädvajaure, just short of the Arctic Circle in Sweden, offered an encounter with a more recent Sami home. We’d camped on a small island, our tent pitched on a narrow gravel beach amidst swathes of bleached dry firewood. The hours around midnight brought a stunning sunset, followed almost immediately by a clean, bright dawn. Not wishing to miss anything, we’d left the tent flap open, and as sunlight nudged another beautiful summer day across the groundsheet towards us, we set out across the lake to explore a waterfall that had roared like a distant jet engine through the brief night. Alongside the cascade, the bare poles of a modern katta sat hidden amongst the silver birch, awaiting the return of its owners with their easily transportable canvas or hide cover.

With the day already advancing fast, our eyes were now fixed on the horizon. Easing our canoe away from the shore, we left this simple home to its peaceful solitude, thoughts turned to the next lakeside camp of our own.

Freelance writer and photographer Tim Gent is a wilderness enthusiast. Living close to the sea, much of his canoeing takes place along protected sections of the English, Welsh and Scottish coast. facebook.com/t.h.gent. 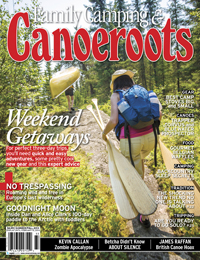 This article first appeared in the Summer 2013 issue of Canoeroots Magazine.