During the summer months of 2010, more people paddled down the Dumoine River than ever before. With incredibly low water levels in surrounding watersheds, vans and canoe trailers were rerouted from their local runs toward the rock garden rapids of this classic whitewater river.

But low water is not the only factor contributing to higher concentrations of paddlers on the Dumoine. Restrictions are easing in school systems allowing whitewater back into outdoor curriculums. A relatively new forest road allows more convenient access. Financial and program objectives are forcing outfitters and camps to travel in larger groups—it’s cheaper to run one large trip than three smaller ones. And the Wild West management strategy on the Dumoine does little more than take a per-head fee to control access; so the more the merrier in their eyes. There is no maximum group size, no route planning and no staggered starts. Compared to rivers in surrounding provincial parks like Algonquin, the Dumoine is a free-for-all.

Some worry this perfect storm is putting too much pressure on the area once considered pristine. And so, I spent six days last summer picking my way down the Dumoine with my family and Canoeroots contributor Brian Shields. I wanted to see firsthand what all the fuss was about.

The Dumoine falls over 39 rapids along its 129 kilometers from its source in Machin Lake near La Verendrye Wildlife Reserve in western Quebec. The jewel of the whitewater canoeing Triple Crown, it flows south off the Canadian Shield into the Ottawa River upstream of its sister rivers, the Noire and Coulonge. All three are popular whitewater routes.

The Dumoine is considered the best.

We drove two hours from our home in the Madawaska Valley and camped our first night in Driftwood Provincial Park on the Ontario side of the Ottawa River. This would be our take-out where we’d leave our truck and where we’d meet Wally Schaber and the Trailhead shuttle van. Trailhead is one of three operators now running shuttles up the Dumoine.

We’d planned to meet early so that we’d be at Bridge Rapids, our put-in above Lac Benoît, for lunch. Then it was a short paddle to Little Italy, a boot-shaped sandy spit and popular first-night campsite.

Before the new access road you had two options: paddle down from Lac Dumoine another 40 kilometers upstream or fly in with bush pilot and owner of Bradley Air Service, Ron Bowes in his 1951 de Havilland Beaver.

For 35 years, Bowes flew canoeists into the Dumoine River valley acting as both transportation and wilderness turnstile, limiting and controlling access with each drop.

“Back then crowding wasn’t a problem. Ronnie kept a keen eye on the groups. He was pretty good at dropping you at an open site and then nudging you along so that you’d be evenly spaced apart,” Wally tells me as we tie down our canoes to his van. “Somehow in those days there seemed to be more class to it.”

I have to admit stepping off the left float of a Beaver is more romantic than the three-hour teeth chattering rattle north into Quebec. Trailhead goes through three sets of shocks a season and sells off their shuttle vans every three years. I made a note to never buy a used white passenger van in Ottawa.

With the increase in fuel prices and a change of ownership from Bradley Air to Air Swisha, the flight almost doubled in price overnight. At about the same time, forestry operations opened a logging road north from Grand Chute linking to Bush Road #819 providing real public access to the most popular section of the Dumoine.

With my wife, Tanya, and Brian asleep in the back seats of the van, the kids plugged into the DVD player, I rode shotgun next to Wally for a three-hour history lesson about the river.

Near the end of the First World War, the boys camp, Keewaydin, pioneered recreational canoe tripping on the Dumoine. From their Lake Temagami base, the boys jumped in green cedar canvas canoes, heading out for four weeks. At Lac Benoît, the campers met up with their river guides. Keewaydin hired J.R. Booth lumbermen to lead the groups down the 60 kilometers of challenging whitewater. We had Brian.

The true Dumoine wilderness was being floated down the rapids toward the Ottawa River.

Massive old-growth pine would then find its way to england and the United States to be used for things like ocean liner decks.

Even the Keewaydin teenagers wouldn’t have known the Dumoine as a wilderness river. Trees closer to the river were easy picking, the first to be cut and splashed into the water. Supply depots and large farms, like the Rowanton Depot with 75 acres of wheat, 200 head of cattle and a post office, provided for the loggers. By 1918, the camp boys may have been paddling through a shoreline of scrubby second growth. However, by the early ‘70s, farming mostly abandoned, the banks of the Dumoine were rejuvenated, ready for adventure.

In 1972, Wally and his partner Chris Harris pioneered wilderness canoe tripping on the Dumoine. Their 1978 Black Feather Wilderness Adventures brochure describes the river as a, “superb wild river, offering beautiful scenery, a variety of whitewater challenges, good fishing. The river is paradise for all canoeists willing to put in the effort to cross the watershed and reach its headwaters.”

It was Wally who first tipped me off to the increased pressures caused by easy access and larger groups.

“When I look back over 40 years, I’ve seen a slow erosion of the campsites and the wilderness experience,” Wally told me. “It started back in the ‘80s with the introduction of Royalex canoes and Therm-a-Rests.”

Although many consider the heyday to have been 20 years ago, roughly the same number of people are still going down the river today. The difference is that trips are now concentrated into a two-month window. Like my family, most canoeists today want perfect summer weather, lower flows and no bugs.

We stepped out of the van for a stretch at Grand Chute—about the halfway point of our shuttle. Boundless High School was also stopped for a stretch. Teenagers leaned against the mini school bus- es swatting flies and punching each other in the shoulder, as excited about the trip as we were.

Boundless is an outfit that runs 10 or so trips down the Dumoine in July and August. Adrian Meissner is their director of operations. He realizes Boundless is one of the heavy users of the Dumoine. I counted 10 tandem canoes tied on their tandem axle trailer.

“Developing social skills and teamwork can only be done in larger groups. And to run a river like the Dumoine with new paddlers, we like to maintain a three-to-one student to staff ratio,” Adrian wipes a mosquito off his neck. “We need a river that allows longer trips with challenging but not over-the-top whitewater. The Dumoine is perfect.”

Smaller, private groups flown in from ice-out to late fall by Ronnie Bowes’s Beaver have been replaced by busloads of inner-city teens. There are four large groups on the river with us this weekend—approximately 80 people stretched over the 60-kilometer run.

“The nice thing about river travel is that everyone moves at roughly the same pace; we may never see another group. If we do, we just plan our days so we aren’t tripping over each other,” Adrian tells me.

I began this trip watching out for trash. We had a loose plan putting us at the nicest and most used campsites: Little Italy on Benoît, Little Steel, Lake Robinson and Margaret Spry. I was looking for the telltale signs of overuse. I checked every fire pit for burned bean cans and crumbled bits of tinfoil. Nothing. I scanned campsites for plastic bread ties, juice box straw wrappers and half buried toilet paper.

Twice a year Boundless sends staff down the Dumoine, partly to train new guides and partly to look after the river.

“We know we are heavy users of the river and so we do our share to keep it clean,” Meissner explained. Staff paddle in with saws, shovels and new thunder boxes and paddle out with any debris they find. “I believe the increased use by camps and outfitters has actually cleaned up the river over the last five years. Looking after the river is part of our curriculum and part of camp culture.”

I didn’t have the same 40 years of Dumoine experiences as Wally Schaber. I hadn’t smoked a pipe and drawn every rock in every rapid like Hap Wilson did for his Rivers of the Upper Ottawa Valley. I hadn’t watched the best campsites sprawl to accommodate a dozen tents. I was paddling the Dumoine for the first time—with a fresh perspective.

At Bowman’s Portage, what the locals call Ryan’s Chute, we’d paddle only a short distance to where the Dumoine pushes into the Ottawa River and then 2.5 kilometers across to Ontario and our truck. Motorboats can access this site and it shows—we stuffed our pockets with nested fishing line and granola bar wrappers, and tossed a dozen empty beer cans in the canoe. This was the first trash we’d seen on the river in six days.

I was still thinking about the future of this river as my kids carried the last of their things to the truck.

The Dumoine is the last undammed, free-flowing tributary to the Ottawa River.

Ironically, the most significant change to come will likely be the success of conservation groups lobbying to create a type of wild river park to protect the Dumoine from hydro development. With any level of protection comes special status; with status comes increased awareness and surely more marketing to increase use to justify a government budget. I’ve come to accept that this is just how it goes.

There may have been a progressive erosion of the wilderness experience, but I wouldn’t know that, nor would my children. It’s the next 30 years that will matter most. Certainly it will to them. If the Dumoine is ever challenged by hydro development, the more people down the river, the more people will care and fight to protect it. And if we were to lose that fight, then all this fuss about the campsites getting a little trampled will seem a bit silly. 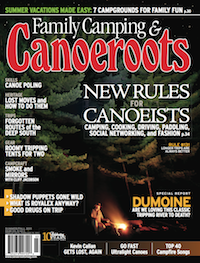 This article first appeared in the Fall 2011 issue of Canoeroots Magazine.