Commuting to work by kayak is both ideal and illogical. It poses challenges at inopportune moments and makes me crazy sometimes, but it’s also one of the best things about living on Protection Island. Since moving to this eclectic community of 300 near Nanaimo on Vancouver Island’s east coast, I’ve traded my car for a kayak and learned a new set of rules of the road.

I begin my commute at first light, carrying my kayak down the gravel road to the beach. I step carefully over the slippery rocks to the shoreline littered with driftwood. I find a spot clear of debris, set my kayak down in the shallow water and begin the 15-minute voyage across the harbour from Protection Island to the downtown Nanaimo dock.

In the cold morning air, dew drips off my eyelashes and my bare fingers are slightly numb on my wooden kayak paddle. As I work my way around the bay, following the shoreline of Protection Island and then crossing the narrow channel over to Newcastle Island Provincial Marine Park, I spot a great blue heron shopping for breakfast near shore. With every stroke, my hands warm up and soon I’m feeling quite cozy in my kayak.

The traffic is light early in the day, with just a handful of Protection Islanders paddling or motoring across for work when I do, around 7 a.m. About half of my neighbours have their own boats while the others opt for the small foot-ferry, the Protection Connection, to travel back and forth.

The commute is mostly stress-free, but there are hazards. Paddling along the Garry oak–studded shoreline of Newcastle Island toward the city, I strain my eyes watching for the flashing strobe on the far shore. As soon as I see it begin to pulse, I hear the grumble of a floatplane coming in to land on its first scheduled trip from Vancouver and I know it’s up to me to make sure I’m well out of its path.

I also keep my eyes peeled for deadheads that, like icebergs with the majority of their mass unseen, can leave a nasty dent in a kayak. I once slid right overtop of one without seeing it and had to brace as it popped up and hit my hull.

There are occasions when the kayak commute is less than ideal. Take for example grocery shopping island-style: a bag of flour, some canned goods, laundry detergent, a 40-pack of toilet paper…it’s bulk shopping at its best. I’ve spent over 25 minutes with shopping bags spread all over the downtown Nanaimo dock trying to stuff groceries in the hatches of my kayak. Someone once asked me what kind of expedition I was packing for.

I learned early on that kayak commuting requires dressing for adventure. Soon after I moved into my cedar-sided house on Protection Island, I put away my long wool jacket and bought the thickest plastic rain jacket and pants I could find. The washroom at the marina in Nanaimo is now an extension of my home. Like Superman in a phone booth, I regularly duck in to peel off wet raingear and change into the city clothes I’ve stuffed into my black dry bag.

It’s completely senseless to spend time doing my hair or putting on makeup prior to my kayak commute. I try my best to conceal my true identity as a kayak commuter, but I’ve arrived at work more than once on a rainy day with salt crusted on my cheeks and wet hair matted down on my forehead.

My friends at work, a two-storey office build- ing filled with hard drives, servers and RAM, call me “Wilderness Girl” and think my kayak commute is utterly insane. Sometimes I stoke the fire by telling them outrageous stories of 20-foot breaking waves and winds strong enough to bend light posts.

When I return to my kayak in the evening, tired from work, I often wish I could teleport myself home rather than paddling. On goes my raingear and lifejacket—still a little damp from the morning—and a headlamp to let other boaters know I’m there.

I push off the dock and my stomach grumbles as I lengthen out my paddle stroke into an even cadence toward home. The city lights behind me sparkle on the water but quickly trail off as I pad- dle into the dark harbour and head for the red flashing buoy signalling the safe passage.

With each stroke, the noises of the city fade. The hum of traffic is replaced by the sound of water lapping at my kayak and dripping off the rhythmic whirl of my paddle. I drop my shoulders and relax my grip.

The truth is, the paddle home is exactly what I need after a day in the office. Each paddle stroke is part of the transformation back to Wilderness Girl.

Much kayaking at rush hour prompted Wilderness Girl, known during office hours as Sue Handel, to investigate the phenomenon of kayak racing in another article in our Winter 2003 issue. No wonder she’s never late for work. 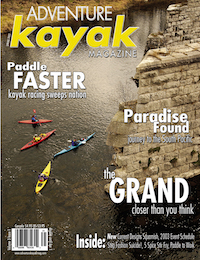