In 1987, Ed Gillet undertook a harrowing solo paddle to Hawaii that has only grown more famous in retrospect. That same year Michael Jackson released Bad and babies were being born who would become today’s millennials. This was a time before corporate sponsorships and Internet updates. When his bow finally cut a furrow into the sand on Maui, the only person there to greet him was a local drunk staggering along the beach. It was the same fanfare he received when he’d left San Diego 63 days and 2,200 miles earlier: none.

There were beautiful days when blue and gold mahi-mahi frolicked around his kayak like puppies, when the sea was a perfect royal blue and trade winds surfed him to 80-mile days. Other times Gillet popped painkillers to dull the pain of saltwater sores on his hands so he could hold his paddle. He ran out of food and began eating toothpaste. Waves crashing into the cockpit made it impossible to sleep. When Mauna Kea finally appeared in the viewfinder of his sextant—yes, he used a sextant—he was so addled he cursed it for obstructing the horizon he needed to fix his position.

Gillet didn’t use the sextant out of nautical nostalgia: Loran and Omega, the navigation systems of the time, wouldn’t survive a kayak trip. He used an off-the-shelf yellow Necky Tofino—a 20-foot tandem sea kayak that carried more than 600 pounds of essentials to keep Gillet alive. His progress was slower than planned—he envisioned 40 days, ran out of food on day 60 and landed on day 64. People thought he’d most certainly died. Relatives contacted the United States Coast Guard, the Commandant of the U.S. Navy and even current President at the time, Ronald Reagan, to try and find him in the vast Pacific.

Ed Gillet’s California-to-Hawaii journey was the first of the modern kayak megacrossings. It was a fundamentally different type of paddling than even the most rugged coastal expeditions or island circumnavigations. It was a journey far harder for most sea kayakers to understand. Only a handful of paddlers would know: Gillet, R.W. Hand, who tried twice and failed to repeat Gillet’s journey, Aleksander Doba on the Atlantic in 2014, Sarah Outen on her worldwide journey, Scott Donaldson, James Castrission, Justin Jones and the late Andrew McAuley on the Tasman Sea.

It’s easy to dream of paddling the Inside Passage to Alaska, around Sardinia, Iceland, or any other coastline or island chain in the world, because those trips are expansions in time, distance and difficulty from what we do on weekends. When I’m on a two-week trip I can easily imagine how fun it would be to just keep going; I’d bring more food, train more, and see what’s around the next point and the next and the next. But crossing a featureless void? Perhaps not.

Camping out on the ocean waves

Gillet described nights as campsites even though they were just wherever in the Pacific he inflated pontoons, dropped sea anchors and squiggled into his cockpit in a salty-wet sleeping bag.

“Each night’s campsite had a different feel—I tried to memorize the look of each place so I could recognize them again. On the ocean the markers are subtler but they are there nonetheless,” he told Dave Shively in 2003. Sounds strange to me, but I suspect ocean sailors know the feeling well.

[ See also: Does Being A Sea Kayaker Make You A Natural Sailor? ]

Gillet’s paddle from California to Hawaii is to coastal kayaking what Space flight is to air travel. Regular people fly all the time, just like regular people kayak coastlines, climb mountains and run rivers. We fully expect to land safely and we make plans for dinner after we land at some airport, or some beach. Space flight, on the other hand, is the province of a select few whose journeys bring both danger and a unique view of our planet.

Gillet kayaked into a rarefied and isolated world, dependent on the only life support system he brought along. When he finally landed and stepped out on the beach in Maui, his legs crumpled under him. Ed Gillet was an astronaut returning to earth after a long time without gravity. 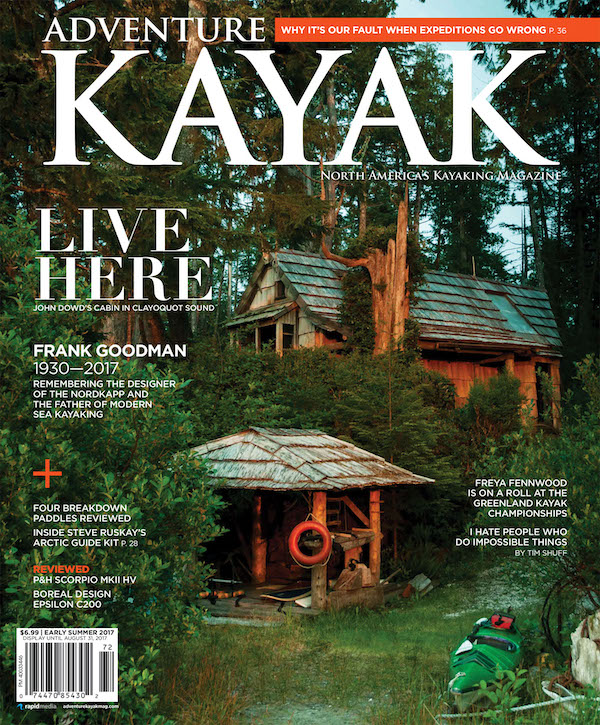