A quick glance at the Riot Astro might tell amateur kayak design historians that this is Riot’s attempt to return to the simple, and very successful, design elements of the Disco. The look is definitely familiar, but there are enough innovations here to make the Disco seem as current as platform shoes and leather bell bottoms.

The top view of the Astro shows the same wide, squared-off tips of the Disco that Riot had abandoned for several years in favour of a more surfboard-inspired hull profile. Why the retreat? According to designer Simon Martin, the increased surface area of the hull’s bottom profile keeps the boat on top of the water for easier launches and landings. The hull profile also crams more effective carving edge into the same sized package—think wakeboard, not surfboard.

Where the Astro improves on the Disco is in fairly subtle, but important, hull design details. The sides of the Astro are more flared than the Disco, allowing for easier forward to backward weight shifts while on edge. This makes it feel smoother, both when setting up for aerial moves, as well as when cartwheeling.

The most significant refinement is the Astro’s unique double chine. The bottom of the hull has a straightforward kick-rocker profile, extending the planing portion of the hull toward the ends of the boat. This isn’t new—it is the basis of modern aerial designs. The secondary chine, which is raised quite a bit from the planing hull, has a different rocker profile than the chine of the planing section. Viewed from the side, it’s as if a kick-rocker bottom has been added to a boat with a continuous rocker profile. This puts the secondary chine closer to the water in the middle of the boat—for better carving–but farther from the water toward the ends—so it is more forgiving.

Does this all add up to improved performance?

Like the Disco, the Astro launches from a pop. The Astro allows you to tap into aerial moves without generating huge down-wave speed, a real benefit to those of us that can’t always find the sweet spot on a wave, or don’t live close to Skookumchuck.

But what goes up must come down. This is where the Astro shines. The increased width in the ends and the forgiving chines allow for sticking sloppy landings. Every wave boat is a compromise between carving and landing ability. The Astro’s definitely fa- vours the touchdown.

But most of us don’t paddle on huge, fast waves. We can’t hit the New River Dries when it’s up and can’t take enough Ibuprofen to offset daily sessions on Bus Eater. Not to worry, the Astro is not just a big air machine.

Like most kick-rocker boats, it likes to be dead vertical when cartwheeling, but once on end, it is surprisingly forgiving—stable and slow in case you aren’t 18 years old or Jackie Chan. It is retentive enough to forgive less-than-perfect technique and provide enough time to enjoy a ride on a small foam pile.

Is it perfect? If you like hard-carving boats with lots of down-the-shoulder speed, then you will probably find the Astro frustrating. And this boat is only available in one size.

Riot has a winner in the Astro. It shines in the hands of expert big-wave paddlers. The rest of us can tap into moves in small holes and on eddylines that we may not have discovered otherwise. The Astro takes the Disco party to a groovy new cosmic level.

Thom Lambert is a moderator of the Boater Board at boatwerks.net. 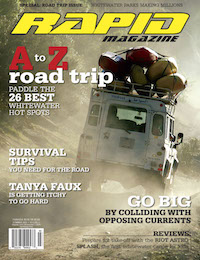