Leave it to one of the greatest polar explorers of all time to dream up an audacious 70-day shoulder-season traverse of the Canadian barren lands involving a canoe, skis and—as it turned out—very little open water.

Over the past 20 years, in between record-setting dogsled expeditions to the North and South poles and establishing a Minnesota-based non-profit to document the effects of climate change, Will Steger has embarked on several early spring ski and paddle trips in the Boundary Waters Canoe Area Wilderness, adjacent to his hometown of Ely, Minnesota.

Will Steger will be traveling solo with a custom-designed canoe

He planned to finish his journey about the time most wilderness canoeists start packing for northern trips. According to Steger’s research, such a journey straddling the transition season between winter and spring had never been attempted before.

[ View all drysuits in the Paddling Buyer’s Guide ]

Besides his waterproof-breathable “miracle suit,” Steger’s other secret weapon is a canoe design he has been tweaking for more than 20 years with Ted Bell of Minnesota’s North Star Canoes.

The pair rounded off the bow and stern of North Star’s 14.5-foot Phoenix solo tripper to better slide on irregular terrain and fortified Bell’s proprietary carbon-aramid construction. The canoe is rigged with a dogsled-inspired runner system, which can be removed if necessary for paddling longer sections of open water.

For its part, North Star’s Bear Paulsen says the partnership with Steger has helped the manufacturer develop a “flexible resin system for maximum durability in some of the harshest conditions on earth.”

His one close call came on April 20, at the headwaters of the Thelon River. Steger hauled overland to avoid flowing water, before veering back onto an ice-covered lake.

Steger’s 2018 expedition began in a deep freeze, with more snow than he anticipated south of the treeline. Winter conditions and frigid winds persisted as he entered the barrens in April.

“I was prepared to travel in conditions from 40 below to 40 above [Fahrenheit],” says Steger, who used a Stephenson Warmlite mountaineering tent for shelter and thawed drinking water and prepared meals on an MSR white gas stove. “This year was so cold I was at the margins of what my equipment could handle. I was fine, but I had to pay attention.”

His one close call came on April 20, at the headwaters of the Thelon River. Steger hauled overland to avoid flowing water, before veering back onto an ice-covered lake. “It was snowing and blowing,” he recalls. “It looked like I was on black ice, but my ski went through. There was hardly any ice at all.”

Steger salvaged the situation and retreated to safe ice, where he paused to reflect on the experience. “I made a mistake,” he admits. The experience reinforced Steger’s mantra to “be in the moment all the time.”

In the end, winter conditions made the entire expedition reminiscent of Steger’s previous Arctic journeys—“but without the dogs and the [polar bear] gun,” he says. The severe weather reaffirmed his efforts to educate the public on the less predictable effects of climate change.“It’s the opposite of what you’d think global warming will be like,” he says. “It’s all driven by changes in the upper atmosphere. A real obvious impact is how the caribou are disappearing up there.” Steger had a deadline to finish on day 70 of his trip.

After pushing hard for two months, Steger decided to enact a Plan B, ending his trip and leaving his canoe at the headwaters of the Back River, where he’s planning to continue this spring on a 90-day route to the Arctic Ocean.

It’s a new, beautiful territory for me,” says Steger. “It’s all so alluring. I love studying the maps and figuring it out. So many different types of routes are possible up there. 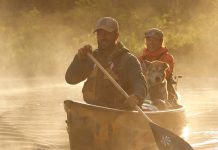