The founder of what’s become one of the most successful ecotourism operations in the world admits that he didn’t have an ounce of business sense when he first visited Chile and fell in love with the Futaleufu River in 1985. Chris Spelius, then a Dagger-sponsored rodeo boater who’d just competed in the Los Angeles Summer Olympics, taught kayaking for North Carolina’s Nantahala Outdoor Center and had notched the first descent of the Niagara Gorge, decided that he wanted to spend as much time as possible on the little known rivers of Patagonia. He figured the easiest way to do that was to set up shop as a river guide.

“I started it almost like an experiment,” says Spelius. “I was just curious about whether or not it would work. I would present slide shows on the Fu and it would be the first time people had heard of the place. I was amazed when the phones rang and the next season I was guiding trips.”

The first trips Spelius ran were bro deals in which he charged nominal fees to lead class V American acquaintances on big water runs. After a few years, Spelius realized that if he wanted Expediciones Chile’s books to balance he had to be more inclusive in his programs and exclusive in his prices. Expert-only boating morphed into beginner- and intermediate-friendly river safaris with an emphasis on instruction; whitewater kayaking expanded to rafting, trekking, horseback riding, sea kayaking, climbing, fly-fishing and bird watching; and prices soared.

Without even realizing it, Spelius had cornered the core of the adventure travel and whitewater market: Older, moderately skilled paddlers with more money than time. A market for guided trips to places like Costa Rica, Ecuador and Mexico emerged, appealing to the middle-of- the-curve demographic that’s a far cry from the globetrotting, waterfall-hucking, dirtbag image of paddlesports marketing. Twenty-five years later, Spelius is still living his dream.

GUIDED WHITEWATER AROUND THE WORLD

Today, guided whitewater trips are offered in exotic places like Suriname, Norway, Thailand and Nepal, besides the classic Central and South American destinations that started it all. Prices range from $350 for seven days of class III–IV+ paddling in Ecuador to $11,300 for three months of paddling and cultural immersion in Chile’s Futaleufu River valley.

Trips run the gamut from laid-back programs with the odd day of paddling to intense, every-day-on-the-water tours. For instance, Quebec’s Esprit Rafting, which has organized adventure programs in Mexico since 1995, runs a weeklong whitewater tour of the Sierra Madre for solid class III boaters simultaneously with a primarily land-based adventure tour to appeal to couples. “When each spouse comes back from the day and says, ‘you won’t believe what you missed,’ we know we’re doing our jobs,” says Esprit owner Jim Coffey.

Esprit’s average group size of eight participants is typical for the industry, as is its 30- to 50-year-old demographics. Coffey requires that participants on his whitewater-intensive Mexican Week of Rivers program have intermediate skills, meaning that “they can roll and it’s fairly reliable,” he explains. Esprit also hosts its fair share of expert boaters.

“Often people think that guided trips are about leading a bunch of newbies down the river,” says Coffey. “But that’s not it at all. We give people the basic rundown and then we work our way down a river like any paddling group would. Some of these people wouldn’t necessarily want to be on an organized trip if they had more time to work out the logistics. We often see younger, budget-strapped guys who show up and try to do it on their own, but inevitably they end up just running the popular, local sections of rivers.”

Fifteen members of Calgary’s Paddle Junkies whitewater paddling club were exactly the type of boaters Simon Cow- ard was targeting when he planned a 12-day trip last fall to kenya. Coward, a whitewater instructor and owner of Calgary’s Aquabatics paddle shop and Adventure Trippin’ tour operator, taught many of his kenya expedition mates their first strokes on Alberta rivers. He says travelling abroad was a natural step in their learning progression.“What we’re try- ing to do is improve paddling skills and give people a cool cultural experience as well,” says Coward. “We do trips in countries where I’ve explored in the past. Basically we’re tak- ing the best of what I’ve done over the years and packing it into a two-week trip.”

Coward’s group consisted of paddlers like Barb Cardwell, a regulatory advisor at Esso-Imperial Oil. Cardwell got her start paddling Ontario and Quebec rivers like the Ottawa, Gatineau and Madawaska before she moved west to work in the front offices of the Tar Sands.“I like to have fun but I don’t like to scare the crap out of myself,” she says.“I don’t think the people in our club have the experience to pull off a self-supported trip of that nature at this point, especially on another continent. The most impressive aspect was having every last detail thought of and taken care of for you. The degree of planning put into the trip to make sure we all had an excellent experience was apparent to all of us every day.”

Therein lies the obvious appeal of going guided: Someone else manages the shuttles, language barriers, permits and paperwork—not to mention dealing with com- plex local geographies that may include rain forests, glacier-melt and monsoons. What’s more, guided trips offer boaters some of the best local knowledge around—a real plus when you’re pushing the envelope far from home. When you sign up for a guided trip “you’re hitting the ground running,” says Coward. “you’re getting a lot of instruction and running a bunch of new rivers. Meals are included, accommodations are sorted, and if anything goes awry you’ve got people there who are trained to deal with it.”

The evolution of guided whitewater trips is also marked by a strong emphasis on blending paddling with culture. It’s the reason veteran guides like Spelius have managed to thrive, and why Coward is in high demand to organize trips to Panama and Tibet in the next two years. “The kenya trip was more then just a whitewater trip for me,” says Trevor Zahari- chuk, an electrical engineer and class III boater from Calgary who joined Coward in Kenya.“It was a place I had always wanted to visit, and the trip was set up to allow us to not only experience some of the great rivers but also enjoy other attractions. It would have been a shame to visit there and not experience those things.”

In the remote Mexican village of Jalcomulco, where Esprit trips are based, Coffey insists that even his most whitewater-crazed clients become engaged with locals. He’s created a “micro-philanthropy” program called Hermanos that encourages trip participants to interact and share with villagers who may not reap the full rewards of the tourism investments. “There’s a lot of great paddling, but there’s also an in- credible connection that we’re able to make for people in this small village,” says Coffey.“When our guests get down here they can’t believe the open door policy. There’s a very genuine hospi- tality that’s a far cry from what people read in the newspapers about Mexico.”

It’s an ironic, happy coincidence that the idealistic lifestyle that Spelius dreamed of creating for himself has become a best-selling ecotourism strategy.“These are the types of experienc- es that are so apart from the ‘steer and herd me down the river’ experience that some people expect,” says Coffey. “We think of ourselves as offering guidance and connection. It’s one thing to go to a country and try to work it out on your own; it’s another to go to a place where you immediately have friends and family.”

Conor Mihell is a writer based on Sault Ste Marie, Ontario. 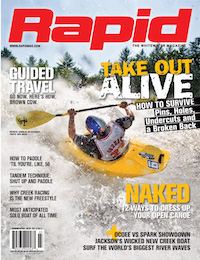 This article first appeared in the Summer/Fall 2010 issue of Rapid Magazine. For more great content, subscribe to Rapid’s print and digital editions here.