The Pyranha Scorch hit the market in 2021 as a successor to the classic Burn. Billed as a boundary-smashing river runner and creek boat hybrid, the Scorch combines and refines characteristics from three of Pyranha’s latest and greatest hits. 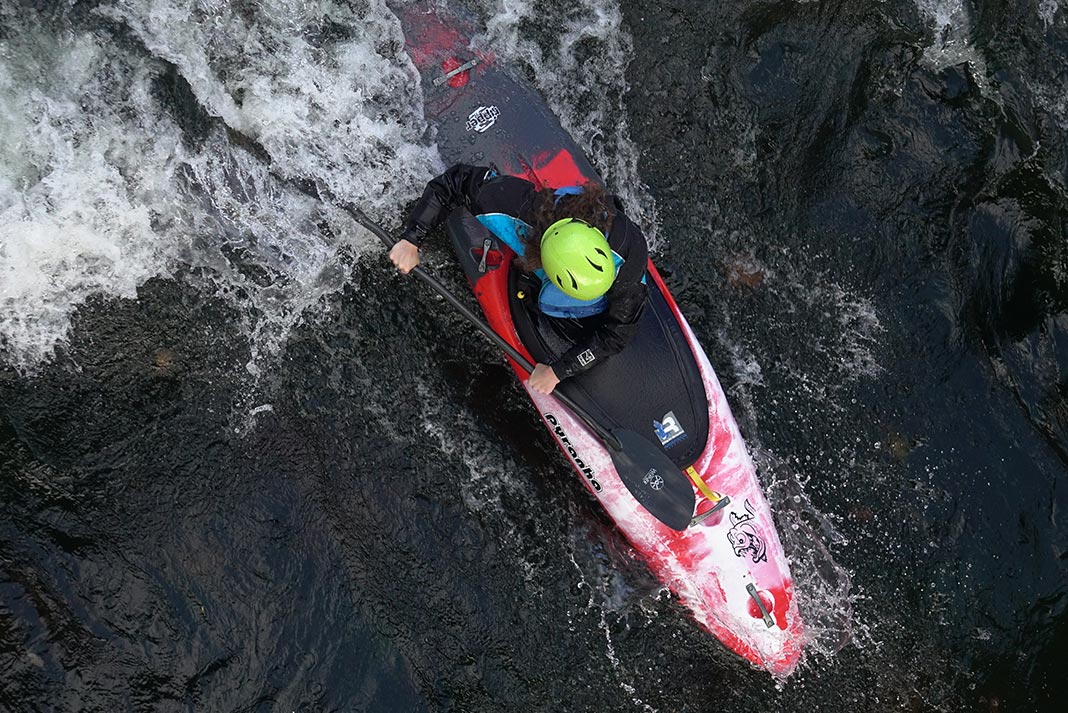 The Scorch starts with a bow and elongated hull influenced by the 9R, beloved for its speed and squared-off stern. The wide planing hull and sharp edges of the Scorch are pulled from the speedy Ripper, known for its nimble playfulness and carving ability. And the Scorch’s kick rocker at the stern is similar to the Machno, which allows the stern to release from features quickly.

For this review, we paddled the Scorch in size medium, which comes in just under nine feet long and holds 82 gallons.

You’ll first notice the bow’s high rocker when doing a walk-around of the Scorch. This gives the Scorch the ability to boof just about, drop and ride high over holes and shed water to stay on the surface. The bow rocker helps prevent pearling when surfing waves, which tends to occur in many river runner designs. This feature is great for some fun surfing, but it also helps you glide across a feature on a must-make move.

The Scorch has a flat, planing hull. Pyranha and other paddlers have compared the hull of the Scorch to the Ripper—Pyranha’s play-the-river, half-slice design. I agree. A wide, flat area gives the almost-nine-foot-long creek boat a nimbleness to spin. Much like the design of the Ripper, the Scorch has biting edges. At the bow, these edges are softer and less pronounced, allowing the front of the boat to pass over rocks and current without resistance. Closer to the stern, the Scorch transitions to a hard, aggressive edge, seeking to dig in. When you want to put this edge to good use, you can load your weight toward the stern and lay out a carve. This drives the kayak in and out of eddies and across the river.

What’s most interesting is the tapering width of the Scorch’s stern and the flattened—rather than protruding—deck profile. Imagine taking a dedicated creek and river running design and giving it the ability to sink the stern. It’s like having an extra boost button to power the bow over features the way you can with a half-slice. This is the premise behind the stern design of the Scorch.

Sure, you could boof with the hull flat. Or you could put the Scorch on edge and then, approaching a feature, sweep the bow up and load water from upstream on the stern. The technique gets the already highly rockered bow up and over anything and looks slick when dialed in.

Pyranha’s Stout 2 outfitting included doesn’t look much different than what they have been putting in their kayaks for years with the Connect and Stout systems. That’s great because the previous generations worked just fine. The ratchet system for the backband is intuitive. The seat, hip pads and thigh hooks are comfortable. For the Stout 2, Pyranha has upgraded the hip pads to a deep fill that molds to your shape, but I would say nothing in the outfitting of the Scorch seemed noticeably different than past Pyranha kayaks I’ve paddled. And not noticing outfitting is generally a very good thing.

The Scorch is built for steep rivers with a good amount of volume. Paddling during spring high-water in the Cascades, I came through a section where the creek pinched between a rock wall and large boulder, creating a squirrely V with reactionary waves surrounded by swirling eddylines. The speed of the juicy creek made me skeptical about whether I could catch the first eddy on the opposite side of the river following this chute. I planned to go for it, knowing I’d probably have to windmill a bit and just make the eddy. My backup plan was to move back to the center until the runout above a log-choked drop. But the Scorch charged through the slot and slid over the chaotic water as though it didn’t exist. I looked for my eddy, leaned slightly back, engaging the stern edge, and the boat kicked right across to the opposite side of the creek. I cruised with barely more than a few correction strokes to make the eddy.

This is indicative of the Scorch from bow to stern. It crushes features. The hull accelerates, the bow rides over and the edges drive on. River features I most anticipated would pass and, a moment later, I would say to myself, “That was it?”

The high bow of the Scorch does create the sensation you are riding a wheelie and takes some getting used to at first. And the chines of the Scorch can get tripped up on a rocky stretch. Paddlers will want to ensure the Scorch’s seat is forward enough to stay over the bow.

For those on low-volume creek runs, the Scorch may feel edgy. But for rivers and creeks with volume, the Scorch can not only charge down the river with confidence, but it can also elevate how you paddle them.

Where to buy the Scorch

Progressive bow rocker keeps it efficient on the move, planing over even the burliest of features, whilst the stern kick-rocker gets the back edge of the boat out of your way and ensures you skip out over whatever lies downstream; a fine balance of length and edge carries speed and maintains precise lines, even in boily, unpredictable water; and the generous but carefully tailored volume keeps you on top of the water.
Learn more