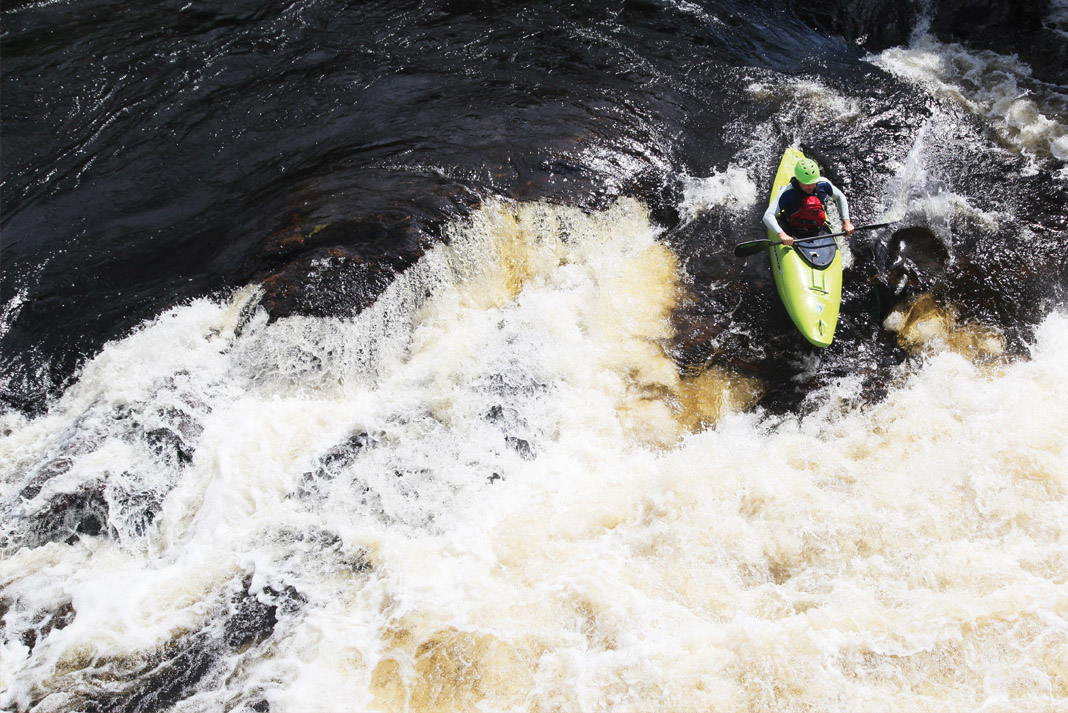 Dad rock is a term used for a slice of rock music that is heavily influenced by classic rock like “Sultans of Swing” by Dire Straits, tunes from an earlier era that appeal to my age demographic. If you know anything about the Liquidlogic Mullet or are the slightest bit intuitive, you’ve probably already guessed that it’s a throwback dad rock boat. It’s time.

When I first unloaded the Liquidlogic Mullet I remembered boats like the Perception Whiplash, New Wave Sleek, Dagger RPM Max and the Prijon Hurricane—I’d mention a Liquidlogic boat here, but the company hadn’t yet formed.

Whitewater kayak design and music have evolved and enough time has passed—literally a generation—for designers and musicians to poach good ideas from the past without the old school label.

Liquidlogic designer Shane Benedict and his team didn’t just remake one of the classics. That would have been too easy and quite frankly too bad. Instead, they took the best of what was fun about paddling in the ‘90s and worked in everything they’ve learned since.

The Mullet is not your father’s kayak

If you’re that person who thinks everything old is better just compare outfitting. Nobody even pipe dreamed something as comfortable or easy to adjust as Liquidlogic’s Bad Ass Outfitting now found in their full line of whitewater kayaks.

I’m six feet tall with size 11 feet and there is plenty of room for my chunkiest river shoes. Back in the day all we got was plastic foot pegs on aluminum rails. New is better.

A big kayak for big whitewater

The bow gets all the volume for landing drops, crashing through holes and shedding water. The bow is also the business end for poppin’ enders and rockin’ pirouettes. The stern is lower volume and slicy for the rest of the fun stuff like surfing, blasting, splatting and squirts. All these retro tricks are fun to learn and relearn, but we can’t ignore the simple addicting pleasure of rocketing around the river in the Mullet.

While all playboats of the ‘90s had displacement hulls, Benedict says he used modern slalom boat design to make the Mullet so fast. Two good solid strokes and the Mullet is off with seemingly no upper limit. Most noticeable compared to other boat genres, the Mullet is more work to spin. Creekers have lots of rocker, freestyle boats are shorter with flat hulls. The Mullet has neither. Instead it has a modern displacement hull, which means it is slower to turn unless you pivot the stern like a slalom boat.

[ Plan your next whitewater kayak adventure with the Paddling Trip Guide ]

I felt like I needed to be moving my upper body front to back to make the Mullet work. Carving waves, blasting foam piles, and even mid-current pivots requires front to back slalom-style upper body English—back to pivot turn and forward for straight ahead features.

Don’t try to paddle the Liquidlogic Mullet like a freestyle boat, but do paddle it long enough to learn it and love it.

The Mullet is an inch to two inches wider than most boats these days. It feels impervious to swirlies and crashing waves. While the stern looks slicey there is still plenty of volume and stability there. Like boats back in the day, the Mullet comes only in one size.

Liquidlogic’s posted specs say the weight range is 150 to 275 pounds. This is bigger at both the low and high ends than their Braaap 69 and Remix 69. No doubt Liquidlogic did their market research and knows the market for this boat is older, bigger dudes and their boys.

At only 180 pounds the Mullet was almost too much boat for me on eddylines. Slalom pivot turns were no trouble, but I felt like I always needed another 40 pounds and stronger currents. The wide beam I enjoyed for river running makes it harder to disengage the leading edge and level the tilt to get the squirt to come around and go vertical. If you don’t know what I’m taking about, go ask your dad.

Times are a-changin’ with the Liquidlogic Mullet

Many of the old boats are still being paddled by those who say, “I don’t have any reason to switch…this boat does everything I need it to do…there’s nothing really on the market I like.” Well, now there is.

The other thing that would have been hard to image in the ‘90s is ordering your music or your kayak on the Internet. Crazy, but this is how Liquidlogic rolls: they deliver right to your door. Visit one of their 54 demo centers across the country and rock a Mullet today.