There’s been a revolution in playboat design the last couple of years. Designers have ever-increasing demands to create boats that are easy for the novice market to make bounce, roll and spin and for the pros to get huge air. And you can’t just let them eat cake when the proletariat cries for an affordable and single kayak that does it all. So even as a freestyler, river running must be saved from the guillotine in design.

Pyranha’s new Rev takes it full circle, offering a small, medium and medium-long version, each with a Bastille-sized list of alterations to their 4-20 design to create a kayak that could make heads roll at the World Freestyle Championships in 2009. Although as purebred as freestyle kayaks come these days, Pyranha designer Graham Mackereth knew his boat had to appeal to both the expert and beginner paddler and he wanted a kayak that transitioned seamlessly from the biggest features to smallest rivers.

The wheels started turning on the Rev with some more obvious hull tweaks. Mackereth started with a far more symmetrical shape than Pyranha paddlers will be used to and moved the cockpit forward, giving the Rev a high-volume centre for lots of pop.

According to Mackereth, it is the full-length, releasing Vortex rails that allow great flat spinning. He says with a flat aft hull section and softer radius in the centre and front sections, you should find edge-to-edge transitions quick and require little effort. It feels snappier to carve but edgier for sitting and spinning, sort of like the Crazy 88, but not that edgy. The chined stern helps cut drag, adding to the Rev’s speed on a wave, which Pyranha has always been known for.

If you look closely you’ll also see Mackereth kept rolling by giving the Rev what he says are slicier ends than his previous models—oh, the forgotten joy of endless cartwheels—and finer edges will give better initiation for your other arsenal of tricks.

In late fall of ’07 the Rev made its first rounds out of the factory and around the world of official test rivers. In the hands of instructors at North Carolina’s Nantahala Outdoor Center, it impressed so much that they placed an order.

“It’s a boat that should make people look and feel better than they really are,” says NOC paddling school Director Wayne Dickert, so of course the Rev is being added to the school’s instructional fleet.

“The Rev proved to release faster, pop bigger and carve easier than any boat Pyranha has designed thus far,” says NOC store manager and boat buyer Daniel Dutton. “I especially loved initiating this boat in a hole or wave to go airborne and connected multiple tricks with control and ease.”

Keep in mind these fellows are pros, for the rest of us who take a little more time to get comfortable in a new boat, the finer points of the design may not be as obvious right away.

“It’s easy to roll, loop and flat spin if paddled aggressively; a good paddler should really be able to get the best from Rev,” Mackereth says. “But like any top-end boat, it does take a few paddles to get really dialed in. A quick test might not reflect its ultimate potential.”

One thing pros and recreational paddlers agreed upon was the Pyranha Connect 30 outfitting. The system is comfortable and easy enough to adjust, however some testers found themselves continually re-adjusting loose fittings. This does not outweigh just how responsive and forgiving the Rev truly is—two traits that have served monarchs and one English boat designer very well in the past. 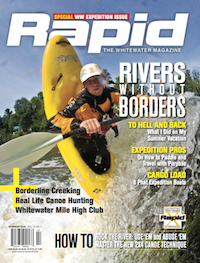