The Dagger Rewind’s release back in the fall of 2019 was accompanied by much anticipation and fanfare. Dagger claimed the Axiom replacement to be the new ultimate downriver playboat. They said the Rewind is perfect for paddlers of all abilities and for rivers from class I to V. Terms like “instant classic” were bandied about. That August, the Rewind was declared the best new whitewater boat of the year in Paddling Magazine Industry Awards.

So, lots of hype. How about now, almost two years later?

The Rewind pays homage to the retro-slice revolution. You know, the low-volume stern that’s back in style for downriver play.

On the water with the Dagger Rewind

Unless you’ve been living in a hole, you’re aware of the half-slice boat trend. Older paddlers are reliving their glory days. Younger, or let’s just say newer, paddlers are discovering how much fun old-school river features can be in a boat with speed and a low volume squirty stern. It’s fun again to run a variety of whitewater, as well as adding an extra challenge to class III to IV where a creek boat might be overkill.

Arguably, Dagger started this retro genre with the Axiom way back in 2009. The Axiom (read our full Dagger Axiom Review) was a progression of the RPM (read Dagger Re-Releases The RPM), featuring ample rocker, increased bow volume and a flattish stern. Back then, it was ahead of its time. By the time the Rewind dropped 10 years later, every major kayak manufacturer had their own version of a half-slice. And it was past time for Dagger to up the game.

At first glance, the Rewind and its predecessor look a fair bit alike, but the team at Dagger has learned a lot since then.

The Rewind is three inches longer than the Axiom. It’s wider at the tail. And has more volume and more rocker in the bow. And the Rewind has overall softer lines than the Axiom. 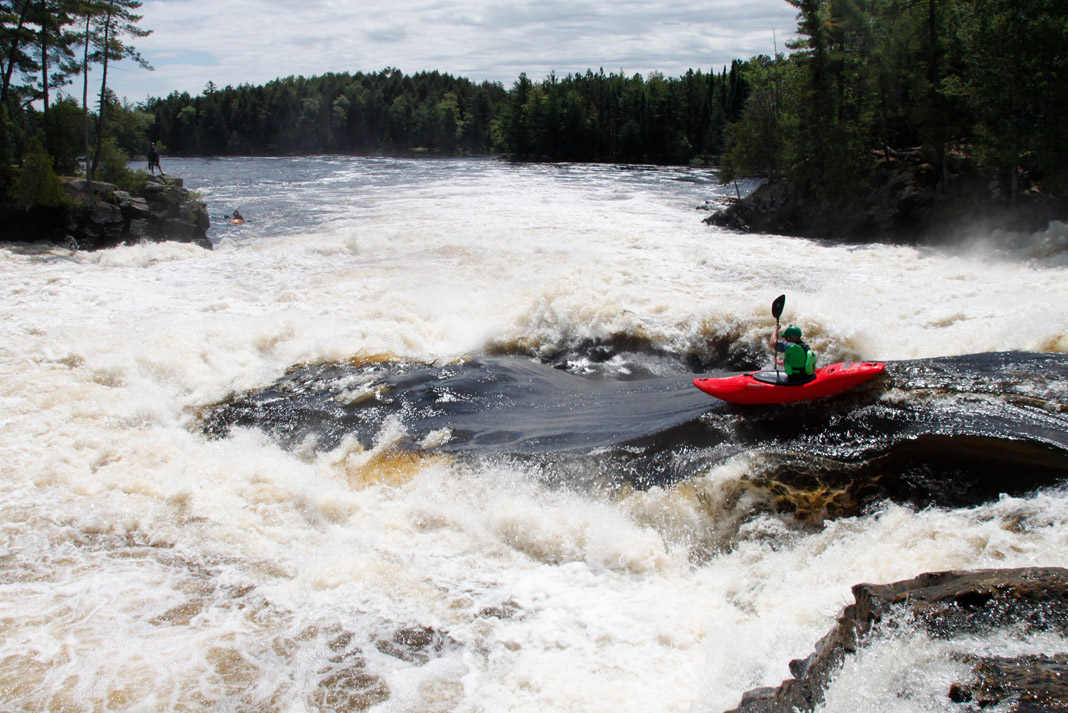 On the water, the Rewind actually feels a lot like a scaled-down Phantom, Dagger’s nine-foot-long race-boat-style creeker. That’s not surprising since the two share a rocker and bow profile. With aggressive creek boat rocker up front, this bow boofs with ease, effortlessly rides up and over hydraulics and can carry you through almost everything, so long as your weight is forward. The bow of the Rewind releases more easily, making it easier to make mid-current pivots and changes in direction than the Axiom.

My medium Rewind loaner measures eight feet, nine inches long. It’s fast on the water, though not as fast as Pyranha‘s Ripper. My Ripper measures nine feet for comparison. Even though the Rewind can charge hard, it remains playful, responsive and stable. It’s a good mix of attributes to provide confidence to paddlers of all abilities.

The bow is cool, but it’s the stern of these boats everyone gets really excited about. The Rewind is optimized to pivot, squirt and get vertical. I found it far easier to get the tail slicing through with the Rewind than with the Axiom. The Axiom felt like it would hit a wall of volume you had to either push through or get rejected. The stern of the Rewind more smoothly slices at any angle.

The softer edges of the Rewind don’t catch much water, which makes it ideal for running steeper, creekier rivers. It cooperates well with big water too, though the Axiom did slightly better in that regard, in my opinion. And make no mistake, the Rewind is a fantastic surfer.

At 6’2” and 165 pounds, I’m right in the middle of the paddler weight recommendation for the medium size, and this size feels great. Lots of volume in the bow means I can fit my long legs and creeking shoes.

With this safer outfitting choice, Dagger has really emphasized the river running and downriver eddyline play qualities over playboating and surfing qualities. Another thing I love about this outfitting is the ratchet between your legs to raise the front of the seat and lock you into the thigh braces to shred waves.

Safety and comfort are what I’ve come to expect from Dagger’s outfitting. Of course, the downside to all this outfitting is more plastic. The medium is 43 pounds. I am still reasonably comfortable carrying the Rewind for longer distances on my shoulder. Its good bow-to-stern balance helps.

The Rewind is available in four colors and four sizes. The kid’s extra small size is still the Axiom hull and outfitting with a new Rewind logo.

Come to think it, we’ve all been pretty much living in a hole since the release of the Rewind. Those early adopters lucky enough to snag the first few out of the mold before the pandemic production chaos will tell you they love the new Rewind. It’s better than the Axiom. The only challenging part about paddling this boat is finding one.

Where to buy the Dagger Rewind

Shop at Amazon
Shop at Backcountry.com $1499.00
Dagger has a reputation for creating boats that not only define an era but stand the test of time; the all-new Rewind is an instant classic and an award-winner. The ultimate downriver play boat for paddlers of all abilities, the Rewind over-delivers on what boaters want and need from a modern whitewater kayak – piercing river running capabilities complemented by an exciting play-ability that allows you to add new tricks to your arsenal. Also comes in XS, SM and LG sizes.
Learn more

The softer edges of the Rewind don’t catch much water, which makes it ideal for running steeper, creekier rivers. | Feature photo: Scott MacGregor