Four decades ago on a rural Alabama creek, a 10-year-old boy launched a canoe and began a journey that would one day lead him to a serendipitous experience in Canada’s Yukon Territory.

Now a 50-year-old river trail promoter, that boy, Jay Grantland, is a canoe guide so experienced he can use the gauges on his 20-year old Wenger watch to clock the speed of paddlers to determine how long it will take to reach their destination. He has paddled thousands of miles on Alabama’s waterways over rapids, on flat water, on slow-moving streams and to destinations with ecological and historical gems like Native American rock paintings and rare flowers and birds. As the Executive Director of the Alabama Scenic River Trail, a 5,000-mile river trail system, Grantland’s latest challenge involves promoting the Great Alabama 650, an adventure-packed, cash-rewarded paddle race that he hopes will launch international interest in paddle sport opportunities in Alabama.

In late June, Grantland and Race Director Greg Wingo, a 40-something ultra-marathon runner and endurance sports aficionado, made a 6,000-mile trek to Whitehorse, Canada to promote the Great Alabama 650. Grantland and Wingo had been in town for less than 12 hours when they were seated across from each other at a tiny wooden table outside Baked, local coffee house, when they learned that word of the Alabama race had already reached Whitehorse.

“We were there having a conversation with a gentleman about trail running and being from Alabama,” Wingo said, recalling the moment. “Another man sitting nearby, named Walter, turned to us and said,

“Have you heard of the Great Alabama 650?” To which we said, “Yes we’re the ones putting on that race.”

The Great Alabama 650 will be the longest paddle-only race in the United States and the longest annual paddle-only race in the world, second in total distance only to the Yukon 1000, which takes place every other year. The Great Alabama 650 will take place on the core section of the Alabama Scenic River Trail and will take paddlers from the foothills of the Appalachian Mountains to the Gulf of Mexico.

“This is a no-frills race,” Wingo said. “It’s more closely aligned with an adventure race than the typical paddle race.“

Participants in the Great Alabama 650 will paddle through long stretches of wilderness as well as some of Alabama’s towns and cities, including Montgomery, the state’s capital. They will portage around 11 dams, encounter a bout of whitewater and face-off with the headwinds from the Gulf of Mexico on the glassy, flat waters of the Mobile Bay. Along the way they will encounter a range of wildlife, to include everything from alligators to otters.

“Our race is going to continually test every one of our competitors right to the very end,” Wingo said. “Racers will be battling the course as much as they will be battling other racers, if not more.”

Walter, the man from the coffee shop, was one of the racers in Whitehorse to compete in the Yukon River Quest, a long-distance paddle race that takes place on the off-years between Yukon 1000 races. The Great Alabama 650 promoters had timed their trip to coincide with the Yukon River Quest so they’d have a chance to meet paddle athletes and race organizers.

More racers in Whitehorse discovered that Grantland and Wingo were representing the Great Alabama 650 and affirmed what Walter, the paddler at the coffee shop, had already indicated: news of the race in Alabama had already spread to the paddle community in the Pacific Northwest.

“I was pleasantly surprised at how many people were not only aware of the race, but really excited about it,” Wingo said. “Many of the world’s toughest paddlers will get a chance to experience the beauty and challenge of our Alabama waterways during the Great Alabama 650. We are excited to put on the longest paddle race in the country.”

To learn more about the Great Alabama 650, visit www.AL650.com, or use the hashtag #AL650 to find the race on Facebook, Instagram or Twitter. Interested paddlers can also find out more about the Alabama Scenic River Trail at www.AlabamaScenicRiverTrail.com, or by using the hashtag #OnTheASRT on social media channels. 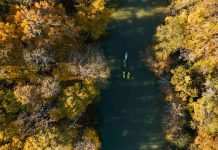 Eight reasons to paddle the longest single-state river trail system in the U.S. 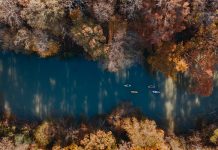