One kayaker and Alaska resident’s plea to leave the wild in wilderness.

Some say Berners Bay and Lynn Canal are haunted, that on certain days when the ocean is quiet you can hear the ghosts of those lost at sea. There are stories of shamans buried on rocky points jutting into the ocean and ancient Tlingit villages swallowed by hungry rainforest and voracious brown bears.

In the early spring of 2014, I kayaked through eerie mist and across the still waters of the bay, hairs prickling on the back of my neck. It wasn’t the threat of tormented spirits, bruins or the restless ocean that filled me with trepidation. The pall that hung over my route was more mundane and far more devastating: the threat of myopic greed and industrialism masquerading as progress.

An 80-kilometer road is planned through this wild land. My trip paralleled the route the road would take along the coastline. Sea lions, land otters, harbor seals and a host of newly arrived waterfowl and shore birds parted before my kayak. Hidden in the forest, a granite boulder etched with ancient images of anthropomorphs, salmon and geometric shapes by Tlingit slaves lay in the shadows. In certain angles of light, it’s said the figures came alive. Seeing this place in its raw grandeur,I had the feeling I was experiencing the eulogy of a wilderness I knew and loved.

I grew up just south of Berners Bay and Lynn Canal in Juneau, Alaska’s capital. There’s no road in or out of this small outpost of 30,000—it is surrounded by ocean, mountains, glaciers and the largest remaining temperate rainforest in the world. Most who live there are happy to reside in close proximity to roadless, wild country. After all, there’s no shortage of freeways, billboards and gas stations nearly everywhere else we turn. To be able to experience creation untrammeled, where we bow to the Earth instead of trample it, is invaluable.

Some people, however, don’t see the inherent worth in keeping Southeast Alaska from following in the footsteps of the industrialized Lower 48. Governor Sean Parnell and Alaska Department of Transportation (ADOT), despite astronomical costs, are set on bulldozing the road extension. It will charge through Berners Bay to the Kensington Mine—and open up other privately owned mining claims for development—before piercing the east side of Lynn Canal to the Katzehin River Delta, where a new ferry terminal is to be constructed.

I paddled to where four large salmon rivers drained into a sprawling estuary. Wolf, moose and brown bear tracks wended along sandy beaches. Flocks of waterfowl fed on the expansive flats as bald eagles and northern harriers turned lazy circles on the breeze. In a few weeks eulachon would come to the river delta to spawn in the millions—along with thousands of sea gulls, eagles, seals, sea lions, humpback whales and other species converging to feast.

Meter-high waves greeted me as I entered Lynn Canal, one of the longest and deepest fjords in the world. It’s considered among the most treacherous waterways in the Inside Passage. I pushed aside thoughts of shipwrecks and icy water, focusing instead on a raft of sea lions blocking my way. One, bobbing contentedly in a wave, almost bumped into my kayak as I slid past.

The coastline here is impenetrable, broken only by 43 massive avalanche paths for the next 40 kilometers. Beaches dissolved into sheer mountains jutting more than 2,000 meters straight up from the ocean. Glaciers embraced all but the most vertical summits. At dusk, I made camp at the edge of an avalanche run-out. Fresh tracks from a wolf pack imprinted a sandy section. Nearby, orange surveyor’s tape, marking the route of the proposed road, disappeared into a huge outflow of avalanche debris.

It’s not just environmentalists who question the rationality of the project. Besides marking the loss of one more wild place, the road also seems like an economic disaster.

A respected avalanche forecaster testified to a state representative that the road would be a deathtrap for motorists for much of the year unless ADOT budgeted millions more on infrastructure, maintenance and avalanche control programs. His warning fell on deaf ears. A local ultra-adventurer and builder asked an ADOT representative how they were planning to construct the road through a gigantic rock glacier. He didn’t get an answer. Proponents initially claimed that ferries (the method of transportation most Southeast Alaska residents depend upon to travel from community to community) were too expensive and that the road would save the state money. In the most recent study ADOT released, however, the state admitted the road would actually cost millions more to maintain each year than the current ferry schedule.

Late in the afternoon the following day, I drifted into the Katzehin River Delta, the end of the proposed road. Six kilometers away, across the fjord, the town of Haines crowded the shore. I tried imagining building, utilizing and maintaining a highway along the last 40 kilometers of cliffs and avalanche paths. More than a gratuitous invasion of a wilderness or an impracticable attempt to boost the state’s economy, it seemed nearly impossible.

I paddled towards the west side of the fjord, where the peaks, rainforest and glaciers of the Chilkat Mountains were aflame with alpenglow. Beer, pizza and a ferry back to Juneau awaited me in Haines. Or, I could turn the kayak south and see the coast as it had been since the Pleistocene.

Civilization and convenience, or raw vitality undiminished by ease and development. The same decision lies at the core of the Wilderness Act, which celebrated its 50th anniversary even as the gavel fell on Berners Bay and Lynn Canal. The landmark act represents the belief that some places should be left free from human influence, that there’s inherent worth in wilderness. But it’s not a victory that sustains itself. It’s a choice we must make—with courage and care—every day.

I choose wilderness and solitude. Accustomed to expeditions in Southeast Alaska being existential odysseys that leave me battered and trembling, I am shaken instead by the evening’s dreamlike calm. Marbled murrelets, loons and grebes, ghostly white in their winter plumage, float tranquilly. Flocks of white-wing and surf scoters wing along the ocean’s mirrored surface. A pod of Dall porpoises swim nearby and sea lions snort and splash. Thousands upon thousands of green sea urchins cling to the rocky shore and a mesmerizing play of light illuminates the shimmering ocean, glaciers and mountains.

As I write, construction of the road is scheduled to begin this spring. There’s still some hope litigation or a lack of federal funding may stop the project, but it’s against the tide of the current political atmosphere in Alaska.

Bjorn Dihle is a writer, guide and fisherman based out of Juneau. 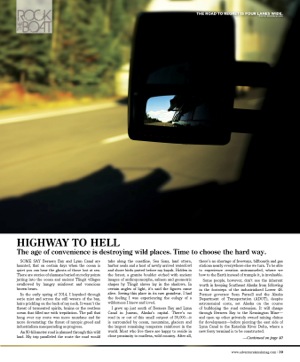