We were just completing our registration forms for the 2005 North American Open Canoe Slalom Championships/U.S. Nationals when our Bell Canoe Works Nexus test boat arrived at the Rapid office. With a new Royalex tandem playboat on the roof racks, we checked one more box on the registration form, entering us in the OC2 REC class. The slalom course of Jonquière, Quebec, would be a perfect testing ground.

Nestled in Zimmerman, Minnesota, Bell Canoe Works has a long history of producing high-quality composite canoes. In 2002, legendary canoe instructor and designer Bob Foote teamed up with in-house Bell designer David Yost to launch their line of Royalex white- water canoes. They first created the shape of the Prodigy and Prodigy X solo boats that provided the basis for their tandem Nexus. Bell is also producing the Ocoee after buying the mould when Dagger bailed from the canoe market.

For the last decade the Dagger Caption has been the standard by which new tandem playboat designs are judged. The Nexus is four inches longer than the 14-foot Caption, has a rounded bottom, moderate rocker and low and balanced sheer. Put plainly, the Nexus wasn’t the boat everyone was dying to try.

However, all of these normal-looking, non-radical design elements come together to produce a non-radical and nice-feeling boat. After two days of training runs on the slalom course in both models, our teams decided to paddle the Nexus instead of the Caption on race day.

Everyone just felt at home in the Nexus. It’s smooth and doesn’t lurch or wobble. It tracked well and we were able to pivot quickly enough to make the most challenging moves on the course. Is it faster than the Caption? There weren’t noticeable time advantages in either boat. Is it wetter than the Caption? It looks like it might be, but on the class II/III course it was difficult to tell.

When the course was closed we snuck out to surf the waves between the gates. The Nexus was a blast to front surf. It had enough of an edge to carve shoulder to shoulder on the wave. We even dropped in for a couple of rompin’ side surfs. These ended with a swamped canoe of course, but one that was stable and fast enough to catch the eddy below for another go.

If we were to nitpick, as racers tend to do, here’s what we’d have our technicians scribble on the clipboards. The bow and stern webbing grab loops were not long enough to carry or effectively rescue the boat. In fact, the ACA boat tech, Bob Stecker, wouldn’t let it pass inspection without the addition of painters.

brand, but the attention to detail just isn’t the same.

With the Dagger Caption as the standard, all new canoes are either faster or slower, wetter or drier, less or more stable, blah or blah, blah than the Caption. The most distinct advantage over the defunct Caption, the mould for which is locked away in a warehouse somewhere, is that Bell Canoe Works still builds canoes and you can actually buy yourself a shiny new Nexus. 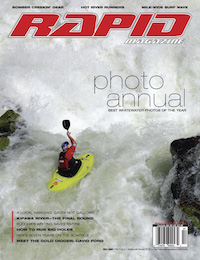