First impressions: The Nigel Foster Legend isn’t the hottest looking Greenland-inspired kayak on the market. It doesn’t have the graceful sharp sheer lines and chines of some of the more ostentatious British designs. But closer inspections reveal a practical advantage behind every missing aesthetic flourish.

Consider those impressive-looking upswept ends we’re so used to seeing on Greenland-style boats: What do they do? They’re like the bombastic tail fins on a ’59 Eldorado. Take them away and you’ve got a little bit less windage and a lot less attitude.

Foster has inflated a skin boat’s sunken cheeks and the result is greater carrying capacity, flotation that keeps the ends from pearl-diving in surf, and an extraordinarily dry ride. It all adds up to practical rough-water performance.

The subtly-arched decks offer similar advantages over the flatter decks of the Legend’s slimmer cousins from across the pond, which suddenly appear a tad anorexic by comparison. The Legend conceals one of the largest carrying capacities in its class—31 litres more than the similarly dimensioned Romany Explorer, that renowned expedition classic by another Nigel.

But don’t think the Legend is in any way bloated or sluggish. Would paring the silly shark fins off that ’59 Caddy rein in the V8? To the contrary, it would probably save gas. The Legend is quick enough. It doesn’t offer lightening- fast acceleration but we found it cruised easily at three to four knots fully loaded and topped out at seven knots in a sprint. On a weekend trip, it held its own alongside other narrow, fast expe- dition touring boats, the CD Expedition and NDK Greenlander Pro, and really took off in following seas. The Legend likes to surf.

Perhaps due to a unique shallow-arch cross-section below its hard chines, the Legend doesn’t flop quickly from edge to edge, but sits comfortably in the water and transitions smoothly and easily into various degrees of tilt for sculling and turning. A low seat position adds to the initial stability.

The arched hull is also likely to hold onto its gel coat through a hard life of coastal touring longer than a V-bottom keel would.

The Legend is the mid-sized version of three Nigel Foster designs hand-built by Seaward Kayaks on Vancouver Island. It’s the size that fits most people best, and is Foster’s personal choice for his expeditions today, replacing his earlier Vyneck, which he paddled on the first circumnavigation of Iceland in 1977.

Conclusion: The Legend impressed us as a renaissance kayak that impeccably balances playful handling with expedition capabilities. A top pick for mid-sized, experienced paddlers who want both capacity and performance.

1. Volvo on the outside

Note the Legend’s softer lines, reduced sheer and more capacious ends than the slender Greenlander Pro, also pictured here. Bow and stern are symmetrical with identically-sized hatches. An optional Brunton Nexus 70P compass ($215 Cdn, $140 US) is nicely recessed into the foredeck. Perimeter lines stop at the front hatch—some would say a safety drawback— Foster says the location of his deck lines is “a more easily identified and secure place to have someone hold your deck line, and because the line doesn’t run all the way through to the bow there is little stretch.” The recessed front and rear oval Kajak Sport hatches have large, easy-to-pack openings, yet are reliably waterproof in rough seas. Seaward’s thorough hand layup includes three fibreglass bulkheads, a Kevlar-reinforced bow and a seam that’s fibreglassed inside and out. Add $590 ($450 US) to get the whole boat in Kevlar or carbon fibre.

2. Caddy on the inside

Padded thigh supports and bucket seat provide a great fit. Excellent support under the thighs. Our 6’2” paddler had ample toe room but maxed out the aluminum foot braces—taller paddlers would have to customize. Reactions to the padded plastic backrest varied—some liked it, others would replace it with a back band. A slider on a cable to the paddler’s left drops the skeg, saving energy in a crosswind by eliminating the Legend’s slight tendency to weathercock.

The sloping rear bulkhead maximizes storage capacity in the generously-sized day hatch and makes it easy to empty the cockpit by lifting the bow. Located aft of the seat on the left, leaving the right hand free to brace with the paddle, the day hatch is easy to open and close while on the go and holds an impressive 36 litres. Paddle float rescue rigging is noticeably absent (Brits with bombproof rolls don’t believe in it). However, Seaward kindly offers an optional quick-release self-rescue strap system ($59 Cdn, $45 US) and will also install a Guzzler foot pump for $430 Cdn ($335 US). 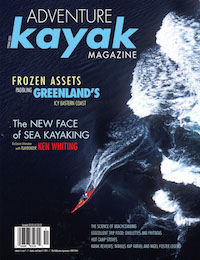