The Nemo is the first sea kayak from New York–based racing-kayak maker KayakPro. This striking design is made to look and be revolutionary by combining the speed of a racing boat with the stability and storage of a touring kayak.

According to Grayson Bourne of KayakPro, “The Nemo can be used as a racing boat due to its sleek profile and speed and the fact that it complies with USCA [U.S. Canoe Association] sea kayak criteria. However, it can also be used as a very fast touring boat, maximizing the distance that can be travelled.”

The Nemo’s long, sleek form, plumb bow and stern, cutaway deck and featherlight weight show its racing ancestry. Given its pedigree and 18-foot waterline, the Nemo turns suprisingly well. The hull shape is a rounded arch with significant flare that provides excellent secondary stability, allowing confident edging to initiate a turn. It carves smooth arcs best with offside strokes at a decent speed. And speed, of course, is its forte. The Nemo accelerates quickly and scoots along with barely a bow wake.

In wind of 10 to 15 knots, the Nemo turned to weather without corrective strokes or use of the rudder. The plumb bow keeps forward momentum and slices through waves rather than rising up and over, making for a wet ride. It surfs green waves well and has lots of speed to catch them, but like any boat with 18 feet of waterline, it tends to broach as waves steepen and break. With a low profile and decent thigh grips, the Nemo rolls ably.

A few missing features show a racing bias: absent are full perimeter deck lines, spare-paddle bungees, and the compass recess found on most sea kayaks. Also, the rudder cannot be deployed or retracted from the cockpit—a problem for rough landings, which KayakPro hopes to fix with an upgrade option later this year. Overall, however, KayakPro has successfully melded racing speed with rough-water performance and storage.

The plumb bow of the Nemo cuts the water quickly and is typical of fast racing hulls. What’s surprising is not that it’s fast, but how well such a long waterline carves a stable turn.

The deep contoured racing seat holds the paddler very well (you won’t miss the back band) and is an inch or so higher than most sea kayak seats, adding power to strokes. It adjusts fore and aft for both comfort and trim. A gas-pedal rudder system attaches to a bar across the cockpit allowing a firm stroke foundation and multiple foot positions.

Decked out for speed

The Nemo’s deck shows its racing pedigree. The cutaway shape gets the deck out of the way for aggressive paddle plants. The non-recessed hatches make for a wetter ride, but are dry inside. 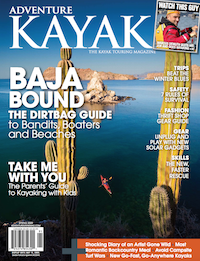