In Greek mythology, Castor and Pollux were Gemini, the twins. Like most twins, the brothers were similar in appearance but disparate in personality and talents. Both were adventurers and Argonauts, but Castor was a skilled horseman while Pollux’s talents lay in boxing. (Unlike most twins, the Greek heroes also had different fathers—mortal Castor’s a human king, immortal Pollux’s the god Zeus).

Improbable genetics aside, the Gemini myth demonstrates the Ecclesiastical adage that two are better than one.

Designers at British boat builder Valley Sea Kayaks reached the same conclusion when they decided to enter the compact touring kayak market for the first time. As Valley puts it, “The decision to develop a proper sub-16-foot kayak was complicated by the spectrum of reasons a paddler might seek out a shorter kayak.”

The solution? Twins. Valley split the egg, creating two boats from the same design and tuning each for a specific purpose. The Gemini SP (Sports Play) is the playful twin, prioritizing maneuverability, agility and strength. The Gemini ST (Sports Touring) is more journey-oriented, emphasizing speed, tracking and lighter weight…. 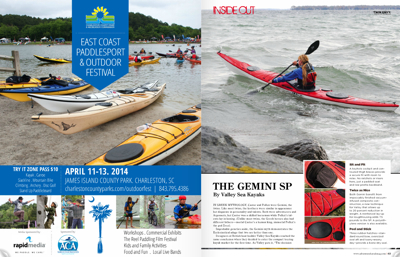