“When something goes wrong, you have to keep flying the airplane,” says Darren Bush, owner of Rutabaga Paddlesports in Madison, Wisconsin, and host of the annual Canoecopia show. “You either hit the ground hard or you hit the ground soft, but either way, you have to work the problem.”

In March of 2020, when Covid first hit North America in force, Bush found himself at the controls of the world’s biggest consumer paddling show as it sped into the eye of the pandemic storm. Exhibitors were already setting up when he decided to cancel the show rather than risk it becoming a super-spreader event. The last-minute cancellation was a massive financial risk, not unlike a pilot steering a doomed plane away from a residential neighborhood.

We all know the story that followed: Stay-at-home orders, shuttered businesses, a new and frightening reality as the virus spread unchecked around the world. And then, unexpectedly to most, an outdoor recreation boom fueled by cooped-up people seeking social distance. Participation surged in recreational activities like cycling, hiking and paddling. Demand for gear soared, and the pandemic-ravaged supply chain couldn’t keep up. According to market research group NPD, sales across watersports shot up 27 percent in 2020 compared to 2019.

Looking back 18 months later, it bears repeating how unexpected the post-Covid boom was. In March 2020, specialty retailers like Rutabaga couldn’t have predicted the insatiable appetite for paddling that would follow the lockdown, let alone their businesses would out-perform large chain stores that were seemingly much better equipped and financed to weather the storm. Specialty retailers didn’t only survive. Most thrived through the most chaotic year in recent history, simply by what Bush describes as flying the plane.

“Being a smaller specialty retail dealer with no corporate pressures, we can react quicker than big box stores and online retailers,” says John Nemjo, founder and president of Mountainman Outdoor Supply Company, a paddling shop of 28 years in the Adirondacks. “We were able to adjust almost on a daily basis based on what we were seeing.”

Nemjo had the luxury of trusting his gut, and his gut told him demand for outdoor gear would rebound as millions of stir-crazy Americans sought fresh air and social distance.

“Our sales never hit anywhere near zero, and within weeks we saw higher-than-average sales,” he says. So when his suppliers told him other retailers were canceling orders, Nemjo pounced. As other businesses back-paddled at the top of the metaphorical rapid, Mountainman went all forward, increasing product orders as others canceled theirs. “We took a chance as we have done over the years, and once again, it paid off,” Nemjo says. “We had boats no one else had. It paid huge dividends to our business that will carry on for years.” Customers came from as far away as Oklahoma to buy boats from Nemjo’s store in upstate New York.

While not every specialty store had the foresight or resources to double down on inventory at the outset of the lockdown, many were still able to navigate the uncertainty better than large retailers whose executives didn’t have their fingers on the pulse of paddlesports.

“The key to succeeding during the pandemic seems to have been understanding the needs of the customer base through difficult times and the ability to stay in step with evolving circumstances.”

Robert Stoky of Florida Bay Outfitters in the upper Florida Keys was cautious in the beginning. He reduced some boat orders, and some of the inventory he ordered was delayed. Stoky responded by shifting his retail focus to soft goods and accessories and emphasizing tours and lessons. The business thrived, even with paddlecraft sales going from approximately 80 percent of pre-pandemic sales to 50 percent since. Stoky recognized that in a destination location like the Florida Keys, people were just as eager for rentals and outings as they were for paddling gear. The key to succeeding during the pandemic seems to have been understanding the needs of the customer base through difficult times and the ability to stay in step with evolving circumstances.

Kelly McDowell can attest to this, though the situation he faced as president of The Complete Paddler in Toronto differed from what Stoky experienced in Florida. Shelter-in-place orders were generally stricter in Canada than in the U.S., and McDowell’s retail season began with a two-month total lockdown. Rentals and instruction weren’t an option for McDowell—not only were instructors hard to come by due to liability and insurance concerns, but he’d sold off its rental fleet the previous fall and couldn’t replace it.

Like Nemjo, McDowell was confident demand would rebound. So while MEC and other big retailers canceled boat orders, McDowell snapped them up. Then he got creative. Though his doors were locked by government order from March into May, he kept the phone lines open, scheduling curbside pickups for eager paddlers. He would deposit boats one at a time on the patch of grass in front of his store, spray them down with disinfectant, and then wave through the locked door as grateful customers loaded their new boat and drove away. Some were regular customers of The Complete Paddler, but others were coming straight from big box retailers that had canceled their orders when McDowell doubled down. “We should have been crushed by those stores,” he says. “But they fell down, and the small independents could react quickly and service those customers.”

When retail stores were finally allowed to reopen in Toronto—if they observed certain Covid-related restrictions—McDowell wasted no time. “I was here until 10 at night installing the new plexiglass barriers myself, and we opened the next morning,” McDowell says. “When we opened on May 19th, we saw an increase like we’ve never seen before. It was insane. We had to limit the amount of people that were in the store. They were lining up to get in.”

“Covid knocked the usually steady balance of supply and demand so far out of whack that big retail’s biggest advantages—price and volume—became less significant.”

Between his early adoption of curbside sales and getting his doors open as soon as legally allowed, he believes running a small business with the ability to deftly change policies gave him an edge over larger rivals. For all the built-in advantages large chain retailers enjoy, it’s a lot easier to dead-stick a Cessna than a jumbo jet—especially when the pilot knows the airspace.

It wasn’t all down to pilot skill though. Covid knocked the usually steady balance of supply and demand so far out of whack big retail’s biggest advantages—price and volume—became less significant.

“One of the most interesting things we’ve faced this season is that with nobody being able to get inventory, the model of selling a million items and making a dollar apiece is a losing model right now,” says Brian DeFouw, chief buyer at Confluence Ski and Paddle in Denver. “So the one good thing is that it’s evened the playing field to where prices haven’t been a huge issue.”

How long this leveling will last is anyone’s guess. While specialty retailers may have outmaneuvered their larger rivals going into the pandemic storm, big box retailers still managed to come through just fine. The Outdoor Industry Association estimates recreational kayaking was the fastest-growing paddlesports segment in 2020, increasing 14 percent. The bulk of those sales are price-point boats carried by box stores, which indicates while the big boys may have faced a slow start and limited inventory, they still sold plenty of boats.

The NPD similarly reports watersports sales at athletic specialty and sporting goods stores increased 34 percent in 2020 from 2019, while sales at outdoor specialty stores increased 21 percent. Dick’s Sporting Goods reported a nearly 10 percent increase in same-store sales at the financial close of 2020. While that figure doesn’t break out paddlesports sales specifically, it’s an indicator the sporting goods warehouse is coming out the other side of the pandemic in good shape.

For big box, the pandemic was a blip. To specialty retailers, it was an affirmation of what they already knew: The value paddling shops bring to their communities is as much about the services they provide as the specific gear they carry. Bush says the pandemic sharpened his conviction that a sale should be more than a transaction. Even after 30 years working in paddling retail, the lockdown taught him new ways of connecting with customers he plans to stick with long after things return to normal, whatever that is.

“We are still scheduling people for car rack installs, boat pickups, test paddles—all things we did for social distancing and workflow. It turns out people like it,” says Bush, who after canceling Canoecopia went on to have one of his best years in business. Some of this comes down to his flexibility and knowledge of the industry, but Bush says the secret of his smooth landing is still the customer experience.

“You have your boat picked out, and when you get there, we have it unwrapped. And we are installing your car rack. And while we are doing this, we are talking about paddles and life jackets. It’s very curated. By the time we
are done, their boat is loaded on the car, they are ready to go and they are stoked. It’s changed the experience, and it’s changed it for the better.” 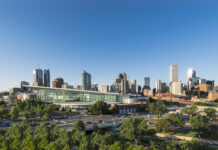 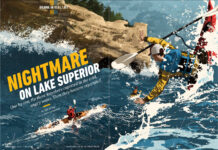 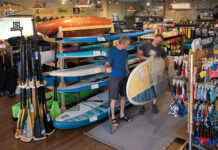