In Jack London’s short story To Build a Fire a greenhorn gold prospector falls through river ice and realizes he must build a fire or perish. He meticulously coaxes a flame from some kindling, but his fate is sealed when melting snow falling from an overhanging spruce bow smothers the fire.

Starting a campfire on a rainy summer night may not be a matter of life and death, but try telling that to the cold, wet and hungry mob that’s waiting for dinner. Fear not, with a single match and the following tips, you can have a roaring blaze in no time.

To avoid a reluctant, smoky fire that needs constant attention, take the extra time to collect good firewood. The biggest mistake is using wood that isn’t dry enough, that is, wood that hasn’t been dead long enough. When wood is dry the bark has already fallen off or can be easily removed. And don’t be fooled by a recent rain. The wet surface of good wood will dry quickly in a fire. Collect dry firewood from beneath the canopies of coniferous trees and piles of driftwood. If you can’t find dry twigs, make your own by whittling off the wet outer wood to expose dry wood underneath.

Timing is everything. If you’re going to get ignition with just one match, have all your wood ready so you don’t have to dash back into the woods as your flame flickers.

Organize your supply into three groups:

Rest the twigs on a stick to get the match underneath. You can give the twigs more time to catch by lighting tinder such as birch bark (only from deadfall) or scraps of paper under them, but don’t get distracted by getting a lot of scattered flames from quick-burning materials such as pine needles or leaves. Concentrated heat and flames are what you need.

When the twig bundle is ignited, add the second bundle carefully so you’re not scattering the twigs and dispersing the heat. Once the second bundle is burning well, dump lots of larger pieces on early to get a good bed of coals. Set your remaining wood around the fire or on the grill so it can begin to dry.

Consider using a firebox, a folding metal box that contains and concentrates the fire so you use less wood. It is relatively light- weight, doesn’t leave a fire scar and allows you to move the fire if the wind shifts or it starts to rain.

Nothing compares to a roaring fire to raise morale, provide warmth, dry your clothes and offer entertainment for those who like to poke and prod, or just gaze at the fire’s play of light. 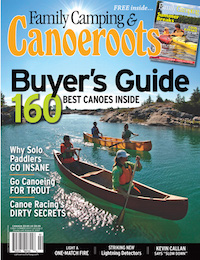