Most canoeists know that a cold swim is often preceded by a wave taken at a bad angle. Depending on your skill level, paddling in large waves can be either frightening or fun. Follow these simple tips for paddling in waves to keep your experience positive.

Not all waves are created equal.

When paddling into wind waves, it’s common for the bow to crash into an oncoming wave, giving the bow paddler a free shower. The solution is to take the waves on a 45-degree angle. This lengthens the distance between the crests of the waves. It also decreases the slope and makes for a drier ride.

Paddling parallel to a wind wave is an unstable position and should be avoided. If you must paddle in wave troughs, keep your hips loose and allow the boat to move with the wave as it passes under. When paddling with wind waves from behind, use a strong rudder to keep the boat from broaching.

Momentum is your friend.

When faced with an oncoming wave many inexperienced paddlers will freeze; instead, maintain your rhythm and keep paddling. Your boat is more stable with your paddle in the water and with forward momentum. Concentrate on planting your paddle at the top of every wave and imagine driving your hips forward and over the crests.

Trimming the canoe by shifting some weight to the stern may help the bow ride over the waves, but be careful not to overdo it; you may have to change direction at some point.

By far the best addition to paddling in areas likely to encounter swell and wind waves is a spray deck. Spray decks keep water out of the boat better than any other accessory and significantly add to your comfort and safety in waves.

The open design of a canoe means that even moderate waves can break over the bow and cause the boat to take on water. Canoes with greater rocker and flare are more enjoyable and safer to paddle in waves. Tripping canoes will fit the bill much better than race boats.

Because swells come in sets of differently sized waves, some will break over underwater rocks and ledges where others will not. Nautical charts show underwater features you may wish to avoid that topographical maps do not. Always look well ahead of where you are and make a mental note of where swells are breaking before you get there.

Richard Alexander is a former president of Paddle Canada and canoeing instructor in Newfoundland. 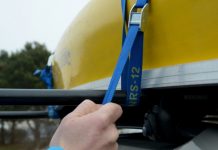 How To Tie A Canoe To Your Vehicle

How To Ferry Your Kayak In Current