How can Great Lakes paddlers and ocean paddlers in areas like southern California, the Gulf of Mexico and many areas in the southeastern U.S. learn to handle dynamic ocean conditions? Whether you want to prepare yourself for British Columbia’s Skookumchuck tidal rapid or notorious races such as Wales’ Penhryn Mawr, or earn top certifications with any of the major paddlesports bodies, paddling high-volume, class II to III rivers in your sea kayak can improve your skills between trips to challenging tidal environments.

How do river currents compare to the races, rips and overfalls of the ocean?

Beyond causality, there are differences in the currents themselves. Tidal currents constantly change as the current goes from slack to max and back to slack again (and then turns and goes the opposite direction as ebb changes to flood). Whitewater currents stay relatively constant with the only change due to rising or falling water levels. Many tidal features are significantly affected or amplified by wind and ocean swell, whereas these environmental factors do not really affect whitewater.

Though these are significant differences, there are many similarities when paddling sea kayaks in these seemingly polar environments. Eddylines, standing waves and pourovers are found in both tidal and gradient-inspired currents. How you manage boat speed and position, angle of approach and edging are basically the same. Eddy turns, peel-outs, attainments and ferry glides remain the most common maneuvers. The ability to surf a standing wave on a whitewater river transfers directly to surfing a standing wave at an overfall. Ditto coping with whirlpools.

When selecting a river for practice, look for a high-volume flow, wide deep channels with swift current, numerous eddies and standing waves, and a safe wash-out zone. Avoid technical rivers with obstructions, strainers and tight turns where there is a risk of pinning or entrapment.

Begin by practicing eddy turns and peel-outs into current. Exit the eddy near the top— a clean eddyline and perpendicular approach will result in the current pivoting you quickly downstream; you’ll want to approach with more speed if the eddyline is turbulent. Edge down into the turn and use a static low brace for support during the transition.

Next, try ferrying—crossing the main current—and attaining—paddling upstream using eddies to ascend a rapid. Cross the eddyline with speed and a parallel approach so the opposing current is less likely to spin your boat. Edge away from the oncoming current and fine-tune your angle until the kayak glides effortlessly.

With coaching and practice, river features can prepare you to paddle anywhere the ocean beckons.

Ryan Rushton is the founder of Geneva Kayak Center in Illinois. He is an ACA Advanced Instructor Trainer, Swiftwater Rescue Instructor and BCU 5 Star Sea Leader. 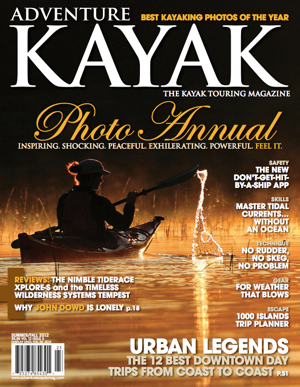