If I had met Mark Harris at the top of Hatchery Falls, I wouldn’t have been able to resist letting loose with my very best clucking display. I’d give him the whole routine, wings flapping at my sides, head bobbing and feet scratching up the mud on the riverbank.

Why would I cluck at a man I had just met? Hatchery Falls is just one of 200 waterfalls Harris has walked into and one of more than 400 he’s researched. And he hasn’t run one of them. Not one.

One thing he has done is compile what he believes to be the most comprehensive list of waterfalls for the province in his book Waterfalls of Ontario. Harris has done more research than anyone for whitewater paddlers looking for new runs on new rivers. He even created a website with the same name dedicated to waterfalls so that other waterfall junkies could compare notes.

Mark Harris did what he did for the love of waterfalls, not for paddling. But early last spring, with his book on the dashboard as our guide, we picked up where he left off.

It was early; too early for a group of paddlers I was sure. I was standing at the pumps talking to a fella with the name Luke embroidered on his shirt. We compared our daily agendas. He was headed north up Highway 35 to fix a freezer and I had to drive another couple of hours west along Highway 118 to Bracebridge, Ontario, one of cottage country’s most picturesque towns.

I was expecting another day of waiting for people to show up, after which a small caravan of egos would arrive and chase each other’s dusty tailgates around looking for spring runs down the wrong gravel roads. Luke nodded like he’d been there, and went inside to pay for his gas.

As I crossed the iron bridge into the old logging-turned tourist town of Bracebridge, the only vehicles on the downtown street were heaped with creek boats. Everyone was there already, I couldn’t believe it. Muskoka Outfitters owner and local paddler Peter Demos had the coffee on, and the boys were hunched over his sales counter transferring Mark Harris’ directions to a local road map.

Peter had been hounding me to get over his way for years. Cottage country is prime Canadian Shield geology with exposed granite and gneiss, home to classic runs like the Oxtongue River, Sharps Creek and a spring run in every valley—24 waterfalls are listed in the Cottage Country section of Waterfalls of Ontario.

The plan for the day was to truck and huck five waterfall descents in eight hours—Kevin had to be back to his cottage at six o’clock for an anniversary dinner with his wife. Our three 4x4s rolled out of Bracebridge, GPS units tracking and mini-VHFs relaying directions from the copy of Harris’ waterfall book in the lead vehicle.

Our assault on the creeks of cottage country wasn’t the first trip Ben Aylsworth had taken with his copy of Harris’ waterfall book as his guide. He, like most paddlers in Ontario, found waterfalls close to home.

Aylsworth remembers the day he got the book: “The book was a birthday present from my Mom and her fiancée. I hit one drop just a ten-minute drive from my mom’s home near Collingwood the very day I got it. It was a first descent called Hoggs Falls—a 25-footer or so into about a foot and a half of water. I really needed to boof. I penciled that bastard. In fact, I slammed it so hard the feeling in my left knee didn’t return until last month.”

I asked Mark Harris what he thought of his book being used as a paddlers’ guide to waterfalls. “Paddlers have been and continue to be a big source of waterfall information for me,” admits Harris. “Waterfalls provide different kinds of fun for different kinds of people. Although you couldn’t pay me enough to paddle over any but the smallest of these.”

When Firefly Books approached Harris about the project he knew it was perfect medium through which to convey the magic of waterfalls to others. “It was as though my strange hobby was immediately justified,” writes Harris. “I wasn’t crazy after all.” The only reason we’d call Harris crazy is that he doesn’t own a creek boat.

Thanks to Mark Harris, what I thought would surely be a circus, turned out to be the most organized assault on five rivers I’d ever experienced. It was clockwork and we’d timed the spring runoff perfectly.

After a warm-up run down McCutcheons and Peterson Falls near Vankoughnet we slipped into stealth mode for what would be our most covert mission: Tretheway Falls, site of an Ontario Power Generation generating station. Chainlink fences and barbed wire surrounded the access, complementing the warning buoys and menacing signs. The only access to the run was through the control side of the dam, a 12-foot vertical dam drop into a munchy pillow and surging undercut followed by a 300-metre class V run. In Harris’ inventory of waterfalls Tretheway is rated as mediocre, Dale Monkman—the only one of us who ran it—thinks otherwise. Even after his first run, the rest of us remained onshore, clucking like contented chickens.

“Unlike some of the other popular falls nearby,” writes Harris, “Hatchery Falls has not been spoiled by any ugly concrete bridges, steel dams, or channelization schemes.” What Harris doesn’t say is that Hatchery is a vertical staircase drop with no pool at the bottom, and on such a low-volume stream boney is as good as this one gets. Hatchery is a real gem, easily accessed from the parking lot of an old fish hatchery complex by a short float down the Skeleton River and a short walk back up on well-worn walking trails along the river. A classic cottage country truck and huck.

For seven years I’d crossed the single-lane wooden-top bridge on the way into my in- laws family cottage at the end of Muskoka Road 3. Every August I had walked the entire 150 metres of Lower Rosseau Falls and watched kids race milk carton boats down the ledgy slide.

In April it is a different story. The run is broken into two sections. The main current of the first drop heads full steam into a very long and ugly undercut. Keeping away from that ugliness is key to a successful arrival at the bottom of the first section. A good set-up for the next section is something you’ll appreciate when you see the river channels into a 6-foot-wide chute carved out of bedrock. You can park so close to Rosseau Falls that you could launch the boats straight from the roof of your ride. The falls spill into the stunning Lake Rosseau where cottages start in the seven figures. The portage trail crosses the summer property of Kurt Russell and Goldie Hawn.

Last on the list, in the face of fading light and a looming anniversary dinner for Kevin, was Bala Falls which is not really a creek boat run, but was close enough that we could paddle it before dark. It’s over these falls in down- town touristy Bala that the Muskoka Lakes pour into the Moon River on the way to Georgian Bay.

While we scouted the first drop and raft-sized holes below the wooden dam a couple of locals excitedly shared their plans to tube it.

Ben Aylsworth and I just smiled. “This is one of the deadliest holes I have ever seen,” he said, watching Dale Monkman who was just then running the third chute in the dam. Then the locals saw the scale of a creek boat against the 50-foot-wide hole. They watched as his creek boat tumbled and surfed the hole’s full width and then popped out the far side. They walked away without a word, perhaps to find bigger tubes. 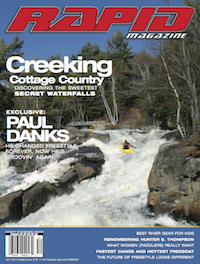