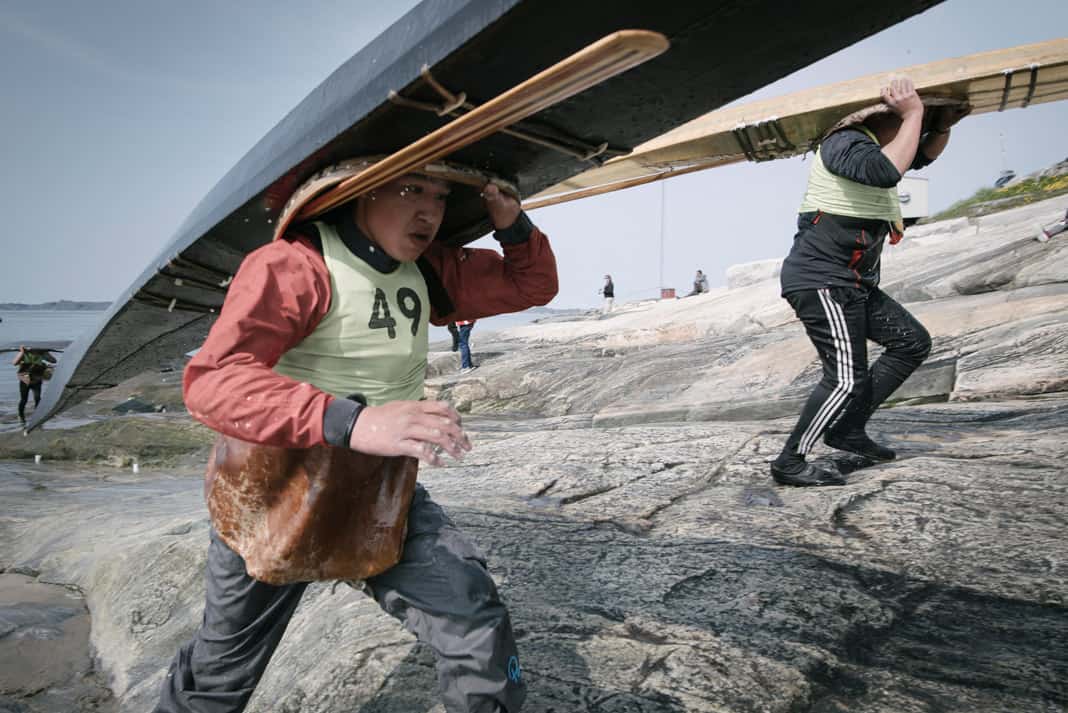 It’s a beautiful summer day on the waterfront in Nuuk, Greenland. I’m watching a preschooler barely out of diapers roll a kid-sized, skin-on-frame kayak like a pro. It’s not something I see every day. The young lad is coached by a man old enough to be my grandfather and crowds of people spanning the age spectrum watch from the shore, urging them on.

A hundred years ago, here on the west coast of Greenland, or anywhere else in the circumpolar world where qajaq is a cultural tradition, you would be hard-pressed to find evidence of these elegant, handmade vessels.

Canoeing and kayaking will never be forgotten in Greenland

Like canoes that fell out of use with the rise of motorboats, offshore fishers and hunters in Greenland turned to engines. Qajaqs and the associated skills faded away.

Canoeing and kayaking are never forgotten by indigenous cultures, which once relied on these craft for sustenance, transportation, and communication—qajaqs are part of stories spanning the generations. But the technical skills of manufacturing and maneuvering are lost from lack of use.

A change came to Greenland in the early 1980s, when three ancient qajaqs were returned to the National Museum of Greenland. The trio had been collected by a Dutch anthropologist and kept for study in a museum in the Netherlands.

According to dearly departed kayak historian, John Heath, some young Greenlanders, including the incomparable Kaleraq Bech and Manasse Mathaeussen, saw these craft on display in Nuuk. Writes Heath, “[they] were impressed their ancestors of 1600-1700 had such sleek craft and the skill to use them. These young men decided to form a club in order to preserve their heritage.”

With paddling programs formed and construction underway, young folk roared around Nuuk with T-shirts reading, “Qajaq-Atoqqilerparput,” meaning, “Kayak, we are starting to use it again.”

Flash forward to 2018 and the Greenland National Kayaking Championships, hosted by the Nuuk chapter of Qaannat Kattuffiat, the Greenland Kayaking Association.

There were 105 competitors representing more than 25 affiliates based in communities around Greenland, as well as enthusiastic outlier chapters from Denmark, Japan and the United States. Competitors are organized by age and gender with categories for children, teens and adults, with a healthy competitive spirit in each.

Where skills and endurance once meant safety and survival while hunting sea mammals along the unforgiving Greenland coast, now the events mimic these necessary skills for points and bragging rights. The winner is crowned Greenlandic Kayak Man or Woman of the Year.

The cultural impact and significance of the qajaq revival to the Greenlandic Inuit community cannot be underplayed. Traditions of health, habit, language, food sharing, connection to the land and sea, building routines and generational exchanges of knowledge are all nourished by a return to paddling, skin-on-frame building and integrating kayaks into aspects of everyday life. To say nothing, of course, of the sheer fun of getting onto the water and building skills through practice and competition.

Today the kayak is a proud symbol of Greenland’s national identity.

Karl Bjorn Hansen runs with his qajaq up the shoreline in the youth portage race. The Greenland National Championships include heavy participation by youth under 15, a sign of Greenlandic culture’s emphasis on family ties. Feature Photo: Kiliii Yuyan