Try out this topic at your next campfire discussion—what is the greatest canoe landmark in the world? The more I think about it, the more I come back to the motto of the world’s smallest record store in Toronto, which is: “We’re not big but we’re small.”

As for the Taj Mahal of canoe landmarks? Hands down, it’s sculptor and Naples, Texas’ own Nancy Rubens’ “Big Edge” in Las Vegas. You’ve never seen canoes doing this! Nancy took almost everything under the sun—not yet kitchen sinks—including televisions, small appliances, trailers, hot water heaters, mattresses, aircraft parts and, yes, canoes to make arresting public art. Leaving aside the sociocultural significance of the choice of canoes as a component in a giant ergodynamic sculpture on Turtle Island, if you haven’t seen the visual “explosion” of canoes that is this Nevada landmark then you might want to scope out “Monochrome I” in Buffalo or “Monachrome II” in Chicago. Or check out related and possibly derivative canoe works such as Victoria Fuller’s “Canoe Fan” in Ann Arbor, or Christopher Fennell’s “Waves” in Lewiston, Idaho.

And if the multi-canoe landmark is not your thing, there are many single canoe landmarks worth investigating. Douglas Coupland’s traffic-stopping “Red Canoe” in Toronto is a 30-foot-long canoe in a downtown public park where, apparently, it’s a bit of a thing for Torontonians to affirm their citizenship under cover of darkness. Slightly more obtuse, but no less arresting, each in their own ways, are Isla Burn’s “Carvel” on the plaza outside Edmonton city hall and Illarion Gallant’s “Commerce Canoe” hanging over Bastion Square in Victoria, British Columbia—all landmarks in their own right.

Landmarks can be geographic. Think Grand Canyon, Mount Fuji, maybe even Machu Picchu in southern Peru. Canoeing has its landmarks of this sort as well, and most of these have to do with nasty portages between major watersheds, like Grand Portage, along the Pigeon River near the eponymous town in upstate Michigan. Or a slightly more obscure but nevertheless significant place between Arctic and Pacific waters called The Committee Punch Bowl on the trail between the North Saskatchewan River and the Columbia River on the Alberta/British Columbia border in Athabasca Pass, so named by 19th century Hudson Bay Company Governor, Sir George Simpson.

And, of course, landmarks can be architectural as well, and canoes have their marker buildings too. Happy to hear of yours, dear reader, but my particular favorites are the Canadian Museum of History in Canada’s national capital on the Ottawa River, designed by Douglas Cardinal featuring a grand exhibit hall built in the shape of a big canoe, complete with upended paddles to hold up the roof. Another notable and far more literal interpretation of canoe as architectural form is the roof of Northlands College in La Ronge, Saskatchewan, which might as well be a big beautiful tin canoe repurposed to keep the rain off young scholars in the boreal wilds of the Canadian west. Oh yes, and if you’re looking for something a bit more urban, check out the Hyatt Hotel in Calgary, whose lobby is a giant upturned canoe.

But “greatest” according to whom? Let’s be honest and agree all of these feats of amazing natural and cultural design have a certain subjectivity to them when it comes to calling them out as globally significant.

When I think of canoe landmarks, I think of an outcropping of Precambrian granite on the shore of Cranberry Lake in eastern Ontario where I live. Our home in the Rideau Lakes district is situated in what’s called “The Land Between,” meaning it spans the limestone and clay soils of the Great Lake St. Lawrence Lowlands and the older, harder rocks and acidic soils of the Canadian Shield.

As it happens, the predominant landform experienced on a paddle here is more limestone and clay, more Holstein than moose or wild wolf. We can hear loons calling throughout the seasons and we do hear packs of roaming coyotes howling at the passing moon from time to time but the only physical manifestation of the Shield’s blue-lake-and-rocky-shore is one relatively tiny granite cliff that, for me, is the best canoe landmark of all. Like the world’ smallest record store, it’s not big. But it’s small. That’s mine. What’s yours?

James Raffan is an explorer, author and former executive director of the Canadian Canoe Museum.

Nancy Rubens’ “Big Edge” is made of 200 canoes and is located in front of the Vdara Tower in downtown Las Vegas. |  Photo: Courtesy Las Vegas News Bureau 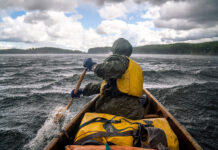 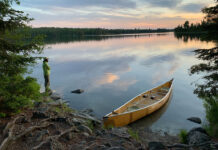