I sometimes struggle to justify my seemingly selfish outdoor pursuits, my obsession with the obscure and anachronistic art of paddling in a world that is facing an environmental crisis of mind-blowing proportions.

I mean, there’s disturbing news out there, stories that ought to be plastered all over the headlines but are usually buried in the back pages. Like the fact that global wildlife populations have dropped by 60 percent since 1970—and two-thirds will be gone by 2020!

And I won’t even get into climate change, how much catastrophic warming is already locked in no matter how much we change our habits now. Stephen Hawking recently predicted we have 100 years to colonize other planets or face extinction.

Meanwhile, in the face of all these existential threats, our culture is in total denial. Oil exploration is booming. Environmental regulations are being shredded. The Paris climate agreement, our last great hope, however toothless, may be on the rocks. The chasm between the severity of the problem and the comparative business-as-usual state of news and politics and everyday life is staggering. To paraphrase the environmental journalist Wen Stephenson, we are all navel gazing while the planet burns.

These dark thoughts are not something to bring up in polite company. My friends and I have all settled into our adult lives. We’re fully vested in the status quo. The combination of dire predictions and sheer helplessness makes for a downer of a dinner party topic.

Taking this stuff on alone is worse.

I came across the story of a New Yorker who was so worried about climate change she couldn’t sleep. She was taking the stairs everywhere to save electricity and pamphleteering idling motorists to get them to turn off their engines. She just couldn’t get why nobody else seems concerned. I saw myself ending up as she did, seeking professional therapy. I mean, the world is ending. Why aren’t we shouting it from the rooftops?

There’s a diagnosis for this now. It’s called eco-anxiety. The American Psychological Association just released a report about it, how worrying about climate change is ruining our mental health. “The psychological responses to climate change, such as conflict avoidance, fatalism, fear, helplessness, and resignation are growing,” it concludes. 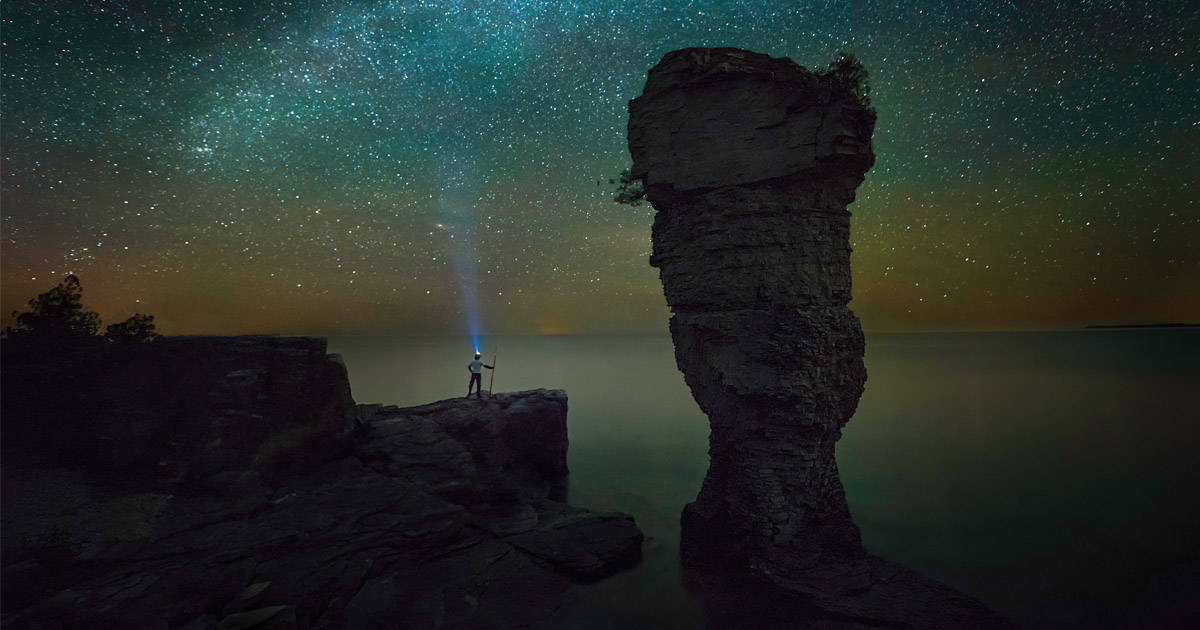 Where does the paddling lifestyle fit into all this, I wonder. Kayaking is not exactly zero impact. It burns resources, and uses high tech equipment made from petrochemicals. Truthfully, the thrill of a great trip often inspires me to buy more gear or plane tickets for the next adventure. Even as I write this, I’m shopping for a new SUV, something big and burly enough for long family trips to remote areas with boats on the roof. Wouldn’t I be doing more to help the planet if I just stayed home and took public transit to the library?

[ Also read: What Kayakers Can Do To Fight Climate Change ]

Despite all the inherent contradictions, I think that outdoor adventure makes for better people and a better planet. But not for the reason that we usually assume: that going into nature magically makes us care more about it, which for all I know may not even be true.

First of all, paddling on an ocean, or gazing up at the stars, which constantly reminds you how small and insignificant you are, liberates you from the illusion of your own importance. After all, it is not only mentally unhealthy try to singlehandedly save the planet, it’s pretty much impossible.

The environmentalist Derrick Jensen covers this in an aptly titled essay, “Forget Shorter Showers.” He argues that carbon emissions need to be cut by at least 75 percent, and that no amount of changing light bulbs or avoiding driving could ever bring us close.

“The whole individualist what-you-can-do-to-save-the-Earth guilt trip is a myth. We, as individuals, are not creating the crises, and we can’t solve them,” states Kirkpatrick Sale in Jensen’s essay.

It’s just an illusion of our hyper-individualistic, consumer society to think we’re so important as to be able to make a real difference through our personal choices alone. Spending time in nature is the ideal salve for this burden. It’s hugely comforting. What a great relief to realize that you’re not personally responsible for wrecking the planet—or fixing it!

Quite possibly outdoor travel does teach us to care for the Earth, but more importantly it teaches us not to care too much.

In these times what is really required is not individual change, but radical, cultural and political change. This is the second reason that I think outdoor adventure has value. It’s a transformative experience that opens the door for major upheaval. Ever noticed how staring into a campfire at the end of a long paddling day triggers those deep thoughts about life’s big questions? We’ve all felt it. Coming home from a long wilderness journey shakes you up and makes you ripe for transformation, not in a “switch to LED light bulbs” kind of way, but in a dramatic, paradigm-shifting kind of way.

The British environmental writer Paul Kingsnorth defends the value of what he calls, walking up the mountain: “Most of the world’s great religions, philosophies, art forms, even political systems and ideologies were initiated by marginal figures. There is a reason for that: sometimes you have to go to the edges to get some perspective on the turmoil at the heart of things. Doing so is not an abnegation of public responsibility: it is a form of it. In the old stories, people from the edges of things brought ideas and understandings from the forest back to the kingdom which the kingdom could not generate by itself.”

Now, I haven’t descended from the mountains with any stone tablets or great, world-saving insights thus far, but at least I have come back feeling a whole lot happier. It provides an antidote to despair that we can too easily feel being bombarded by news that the world is falling to pieces.

Back to that APA report, if we’re to deal with the impending challenges, we need our wits about us. We need ingenuity. We need psychological resiliency. We can’t succumb to hopelessness or the dangerous fad of denial.

There’s many a day that I’ve felt total despair, a virtual paralysis of worry that drives me to think crazy thoughts like, “I should give up paddling to reduce my ecological footprint,” only to be replaced after a couple of hours on the water by a joie de vivre and readiness to tackle just about anything.

I’ll never give up paddling because it’s the best therapy I know. Heading outdoors with a paddle in hand puts us in a sharp, healthy, tuned-in, problem-solving frame of mind, which is a much more powerful position from which to change the world, or at least put up with whatever the challenges the future may bring.

Guardian of the galaxy, people from the edges of things bring understandings back from the forest to the kingdom. | Photo: Henry Liu 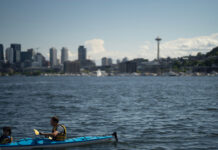