River water flows downhill, around corners and between rocks. I spend most of my time paddling whitewater so I understand rivers. Ocean currents, however, are caused by a gravitational interaction between the Earth and the Moon that’s mysterious to me. So, I booked myself into Body Boat Blade International’s two-day ocean currents course, which promises to take advantage of everything Deception Pass has to offer and build on the skills of intermediate sea kayakers.

I met Leon Sommé in 2004, when we sat together on the board of the Trade Association of Paddlesports. He and Shawna Franklin had just returned from an 81-day circumnavigation of Iceland with fellow adventurer Chris Duff. During breaks from the boardroom table we talked about rivers and oceans. Leon told me about the eight-knot currents, drastic eddy lines, incredible whirlpools and large upwellings at Deception Pass.

Leon met Shawna 21 years ago in a kayak rolling pool session at the University of Minnesota, where they were both studying biology.“The instructor told us to find someone with the same length legs,” remembers Shawna. “ This way we would not have to keep adjusting the foot pegs inside the kayak we were sharing.” This turned out to be fine dating advice.

The two then worked as guides for Shearwater Adventures, a kayak tour company based on Orcas Island, Washington. While there, they developed an instructional program, which they ran for six years before breaking away and, in 2001, found- ing Body Boat Blade International.

“When we first started instructing at Shearwater, we found the BCU and started training in the BCU system,” says Leon. “We like the BCU because its curriculum and assessments help students set and achieve goals. It has an outstanding coaching program that teaches how to most effectively deliver programs and teach current best practice.”

I’d say their teaching style is one of coastal learning. They try everything once. If it works better than what they are currently teaching, they work it in. I felt encouraged to do the same. I asked Leon about this.“Why keep doing the same old thing, if there is a better way?” Why indeed.

We begin the course with what Leon and Shawna introduce as a speed launch. Speed launch, what the hell is that? I wonder.

All of us line up on the beach, our boats floating, pointed towards the open water. I have the stern toggle of my boat in my hand, not sure what’s going to happen next. “GO!” Like sprinters out of the chocks, the group charges into the ocean, sliding their boats ahead of them. They run as fast and as far as they can and then dive clumsily onto their kayaks. With a leg on either side of their cockpits, they drop their butts into the seats, slip their legs inside and reach for their skirts. This was obviously not everyone’s first Body Boat Blade course.

I thought back to my first sea kayak expedition. What contrast. I spent 45 days gingerly entering and exiting in a farmer john wetsuit, booties and wool socks, just as the ice went out on Lake Superior, afraid to so much as get my feet wet. If I did, I’d be cold and miserable the rest of the day.

Every one of us in this Body Boat Blade currents class had on a full dry suit.

“Cold people don’t learn,” says Leon.“Dry suits allow our students to get into the water without getting too cold and wet. It gives them more confidence to try things like rescues, bracing and rolling.” And yes, the speed launch. If I hadn’t brought my own dry suit, I could have borrowed one from the well-stocked Rubbermaid they carry with them in their truck.

“The speed launch is fun. It helps teach people more about balance and assists them in practicing some of the moves for the cowboy scramble rescue,” says Leon.“It helps them get their 10,000 hours.”

As easy swell rolls against the rocky coastline, we snake our way along, rubbing shoulders and boats with barnacles. “Getting you paddling right along the shoreline shows us something about your technical abilities, your confidence and your willingness to try new things,” says Shawna. “All of this information helps us to decide the best plan for the day and if we actually want to bring you into the Pass.”

I wonder how I’m doing. I decide it best not to ask and wait to see where we end up.

A Class II River, Except Saltier

Deception Pass State Park is a winding 20-minute-drive from our hotel room in downtown Anacortes in north-western Washington State. It’s a 4,000-acre marine and camping park with 77,000 feet of saltwater shoreline.

Deception Pass connects Skagit Bay, part of Puget Sound, with the Strait of Juan de Fuca. From the launch at the Bow- man’s Bay campground, it is a short paddle to Canoe Pass, a more intimate lesser-traveled, 25-yard channel below the Deception Pass Bridge, between Whidbey Island and the tiny Pass Island.

Today, Leon and Shawna have timed our launch with slack tide. We arrive at ebb tide as water begins to spill back toward western Washington State. It’s a 4,000-acre marine and camping park with 77,000 feet of saltwater shoreline.

Deception Pass connects Skagit Bay, part of Puget Sound, with the Strait of Juan de Fuca. From the launch at the Bowman’s Bay campground, it is a short paddle to Canoe Pass, a more intimate lesser-traveled, 25-yard channel below the Deception Pass Bridge, between Whidbey Island and the tiny Pass Island.

Today, Leon and Shawna have timed our launch with slack tide. We arrive at ebb tide as water begins to spill back toward the ocean and we watch small eddy lines slowly form. In the beginning, they are very subtle, just perceptible enough to spot the division between the current and the calm eddies behind the nearby island and point. Then, before our eyes, the Moon’s mystifying force cranks open a big tap and a rush of water magically begins to flow to the ocean. Over the next three hours, the current’s speed builds to the day’s high of 7.4 knots, creating a smooth green tongue between a clean eddy line and a mushy, confused mess of converging currents and whirlpools.

“We use the 50 to 90 percent rule of currents,” Shawna tells me.“The tidal exchange takes approximately six hours. During the first third of this exchange, the current will be 50 percent of its maximum speed. The next third will build to 90 percent. And the final third we consider to be at its maximum.” And then, predictably the cycle reverses until it’s back at slack tide again. I’ve experienced this before on the Upper Yough River in Friendsville, Maryland, though its cycle was far less romantic. A valve was opened in the morning and closed at night by a man in a hardhat up- stream at the Deep Creek hydro control dam.

We huddle up on a beach for an intro to currents chalk talk. Leon sketches the features in the sand with piece of driftwood. Rocks. Eddies. Arrows to show the direction of the current. Eddly lines. I’d drawn the same thing hundreds of times while teaching whitewater canoeing. The morphol- ogy of moving water is the same. How sea kayaks react is completely different.

Back in our boats, I realize just how special Deception Pass really is. We begin breaking into and out of the current. We practice ferry glides back and forth. We’re gaining the tactical knowledge of speed and angle that Leon demonstrated with a toy kayak on the beach. We begin in a slight current and, as our skills and confidence progress, so do the speed and level of challenge, almost imperceptibly.

By 90 percent flow, we feel confident, quite pleased with ourselves, maybe even a little cocky. Shawna and Leon figure it is time to up the challenge.

“Okay, now what I want you to do is pull your skirts and get your butts on your stern decks,” Leon was grinning.

“Okay. Good. Now ferry out into the current.”

Low brace. Easy. Steady. I balance in the eddy waiting my turn. David, who’d taken a number of Body Boat Blade classes before, taps me on the shoulder,“How about I stick close?”

I burst across the eddy line and then, as David predicted, I flip. This was, of course, the purpose of the exercise. Had I succeeded, Leon would have upped the ante to standing on my back deck, juggling chainsaws. Anything to get us out of our comfort zones and into the water, practicing rescues in the current.

“It’s one thing to understand how our boat is affected by currents and whirlpools but it is equally important to be comfortable in the water,” says Leon. To me it feels like floating down a deep class II river, except saltier. 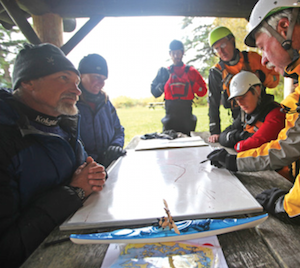 Back in my hotel room, I’d watched Body Boat Blade’s first instructional DVD, Sea Kayak Rescues. I learned that my first job as a swimmer is to hold onto my paddle and roll my boat upright, which allows me to hang on to its deck lines, essentially gathering up the yard sale I’d created. I’m still in the current moving toward the Pacific, but at least now I have options.

I can clamber up and straddle my stern deck. Just drop my butt in the seat and stuff my legs in. The cowboy rescue. We learned to do it this morning during our speed launches.

Instead, David is right with me, as he said he’d be. We decide to practice something different. He tells me to grab his deck lines near his cockpit. In seconds, he’s dragged my bow across his lap, rolled my boat upside down, tilted his boat, and effectively emp- tied my cockpit. This took all of 10 seconds. He pulls my boat parallel and waits for me to climb in. He’d seen the video, too.

Deception Pass is not particularly unique. There are tidal currents at many areas in the Pacific Northwest. A few offer faster currents and larger surf. Leon and Shawna have paddled most of them,“In some of our other classes we use the waters in and around the San Juan Islands. These areas are more apt to have standing waves caused by tidal races, or current opposing wind.” The most famous, Skookumchuk Narrows in British Columbia, was featured in Justine Curgenven’s film, This is the Sea 2. “Due to the high numbers of paddlers there on a good tidal exchange, we don’t teach at Skookumchuk as often.” What makes Deception Pass unique is easy access and good clean fun.

Deception Pass’ easy accessibility and Body Boat Blade’s get wet approach to teaching are changing the way people go sea kayaking. By removing some of the variables, we’re allowed to practice technique with little concern for anything else.

We spent two days playing on only 200 yards of water in a state park 30 minutes from where we parked our car, 20 minutes from town.

Leon knows that for some this will become their go-to playground. For others, it is a training ground.“If you can paddle here with success and comfort, you can easily apply this knowledge and experience to your local waters.”

Scott MacGregor is the founder and editor-in-chief of Adventure Kayak. For more information about paddling Deception Pass, visit bodyboatblade.com and parks.wa.gov. 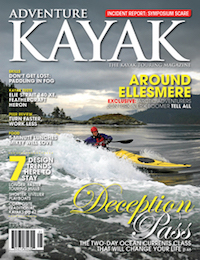