Dave Calver has paddled more rivers in more countries than I can name without the help of an atlas. Tough, stubborn, sensitive—but never too sensitive to tell you what he was thinking if you stared too long at a shot glass or a boulder-ridden class V run. Dave would always pipe up, “Come on man, take your balls out of you purse.”

When I caught up with him last spring in a wheelchair-accessible brewpub in downtown Vancouver, Dave told me that those are words I’ll never hear him say again.

At Lakehead University in Thunder Bay, he was the only guy on campus with his own boat. During the summers he taught hundreds of people to paddle—you couldn’t help but take your balls out of your purse, sucked in by his passion for paddling.

When the rest of us peeled behind the white picket fence called real life, Dave kept his drybags packed and moved around the world floating from river job to river job. Then, after 10 years of the most footloose, free-spirited, adventure-filled life I know, Dave had an accident and became a paraplegic.

After finally settling down and landing his dream job as the river-based instructor at the prestigious Thompson Rivers University adventure Guide program (formerly Caribou College) in Kamloops, Dave landed on his head. Not wanting to be outdone by his riding buddy, Dave launched himself off a mountain bike jump, a jump he’d been avoiding for days. He said he knew as soon as he was airborne he was in trouble and he knew immediately when he crashed that he had broken his back.

Sitting with him drinking beer I didn’t notice his chair anymore, he was just my buddy Dave rolling with life’s punches. He says in many ways he sees more opportunities opening up for him now than he did as an able-bodied person.

He traded his five-speed Tacoma pick-up for a lower riding, automatic Subaru wagon. He sold his snowboard and bought a sit-ski. He traded his mountain bike for a racing wheelchair. He left his college job in the mountains for a master’s degree in occupational therapy in the snow-free streets of Vancouver. And so long as Liquidlogic is turning out kayaks, Dave is set up for boats.

I asked him if he thought his sponsorship was some sort of publicity stunt.

“Shane Benedict is a good friend who I worked rivers with in Nepal and Ecuador. When he heard I was getting back into boating he wanted me in his boats. i guess sliding my atrophied ass down riverbanks on a modified Crazy Carpet represents a love of paddling and dedication that the guys at Liquidlogic understand and respect.”

Whether through luck or karma, Dave was left with the right muscles to continue paddling. He has use of his adductors to bring his knees together and hip flexors that allow him to roll. Dave was discharged from rehab in January of 2003. He was back in a boat by early may and linking cartwheels that summer.

What he lost are his butt muscles, hamstrings and everything below the knees. “I spent many hours in friends’ basements with piles of foam and cans of glue,” Dave told me. “They kept turning me upside down until I had my legs stuffed in tight enough that I wasn’t falling out.”

After beating me in a few drunken laps around the crowded bar in his wheelchair, Dave asked me to draw him a picture of my C1 outfitting set up. “I think I’ll give it a try,” he said with a wry smile. “C1 is perfect for guys like me. After a day of kneeling in your boats, you guys can’t feel your legs either.” 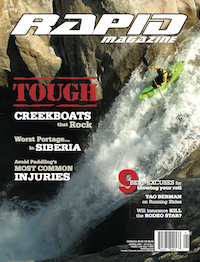 This article first appeared in the Spring 2006 issue of Rapid Magazine. For more great content, subscribe to Rapid’s print and digital editions here.