Last June, protests broke out worldwide. It started in the United States and spread to nearly every continent. Marchers rallied for social justice, equity, diversity and inclusion (JEDI) for Black, Indigenous, People of Color (BIPOC).

Later the same month, I woke up to a notification about a post from Immersion Research, titled “A Letter To Our Customers Regarding The BLM Movement,” stating its support for the Black Lives Matter movement and commitment to “helping diversify outdoor recreation.” As a Black presenting, multicultural person of color, I had been wrestling with what I could do to move the needle in a positive direction. Because when there is a lack of equity and inclusion for anyone, it impacts everyone—including BIPOC, stigmatized veterans, people with differing abilities, LGBTQ+ and low-income white folks.

IR’s blog post hit home. I felt convicted of not having done enough. I vowed to use my platform as a speaker, writer and video producer to normalize outdoor adventure for people of color. Even though I’ve been an avid kayaker for seven years, I’d only met five paddlers of color on the water.

Following a seven-month research project investigating the lack of diversity in whitewater, I’ve found these are the top challenges facing our sport, industry and community—and what to do about them.

Diversity will be the difference between a future spent surviving or thriving for the adventure sports industry. According to the Outdoor Industry Association’s Special Report On Paddlesports, while 22.9 million Americans participated in at least one paddling activity in 2018, more than three-quarters of participants were white. Recreational canoeing and kayaking participation, the two paddling disciplines with the most participants, reported 80 to 83 percent white participants.

The biggest threat to the adventure sports industry is businesses may become irrelevant if they do not evolve to attract a changing population. The Outdoor Foundation’s 2019 outdoor participation report shows only 73 percent of white Americans participated in outdoor sports that year, down from 82.8 percent the decade before. This decline is likely due to an aging population, less youth participation and normal attrition.

Meanwhile, U.S. census data tells us population growth is faster among minority communities. Today, about 50 percent of U.S. children under 18 are members of ethnic minority groups. And according to global consulting firm Accenture, 47 percent of all millennial Americans—aged 23 to 38—are multicultural, and together they wield more than a trillion dollars in spending power right now. Diversifying isn’t just the right thing to do—it makes economic sense to make outdoor adventure relevant to a growing and significant population. If the paddling industry does not reach out to these potential new customers, it misses a crucial growth opportunity.

You can be like Kodak, which developed a digital camera in 1975, saw the future coming and ignored it, and almost didn’t survive—or you can do a little more to promote diversity, equity and inclusion in paddlesports.

Trying to start a conversation about the lack of diversity within the paddling community is sometimes met with dismissal, offense or microaggressions—instances of indirect, subtle or unintentional discrimination against members of a marginalized group.

White fragility shows up as discomfort and defensiveness from white folks when confronted by information about racial inequality and justice. It makes it challenging to have conversations about the lack of diversity in our boating communities. White fragility might sound like this: “I come to the river to forget about that stuff. I don’t want to hear about that diversity stuff on the river.”

I can’t shed my brown skin and drop out of the conversation about diversity when I feel like it because someone will eventually remind me that I’m different—not white. I haven’t experienced racism or misogyny in adventure sports, but others have. I have experienced it elsewhere: When I left my office back when I was a tech firm CEO, the security guard and a sales associate at a high-end department store promptly asked me if I could afford to shop there.

In another example, during an immigration raid outside of a Hispanic grocery store in Raleigh, North Carolina, I joked in Spanish with another customer as I exited the store. An I.C.E. agent seized my arm and shoved me against the building and asked for my identification. When I produced a driver’s license with a U.S. Army veteran emblem, he said I needed to carry my passport because I “don’t look American.” I was born and raised in the U.S., but as a person of color, I’m expected to carry a passport to prove I belong in my country.

Willingness to listen to everyone’s perspectives and experiences in our paddling community is an essential step toward making it more welcoming for everyone.

Twenty-first century consumers want value-aligned brands. Calls for diversity, equity and inclusion mean companies must evolve their marketing practices. It’s not going to be easy for the outdoor industry, whose leaders are mostly white, to market to a non-homogenous group it does not understand. Adventure sports marketing needs to include people of color, while also removing biases like colorism and texurism, which refers to preferring models with lighter skin and straighter hair. It’s also important to avoid turning “Black lives matter into Black lives marketing,” as Black Enterprise magazine stated.

It’s not going to be easy for the outdoor industry to market to a non-homogenous group it does not understand.

Organizations can also support BIPOC-led initiatives with donations of funds, time, gear or expertise. Liquidlogic, Kokatat, Paddling Magazine, Watershed, Immersion Research and many local partners supported an initiative I co-founded this past summer called Diversify Whitewater. Our nonprofit welcomed more than 100 new paddlers of color onto the water for the first time through free skill clinics.

The BIPOC community needs to tear down its own cultural barriers and limiting beliefs:

“Black people don’t do that.”

These examples of BIPOC-on-BIPOC microaggressions will stop some people from participating in paddlesports and other activities not traditionally enjoyed by their cultural community. Race shaming from my family, friends and community prevented me from taking up an adventure sport for 10 years. This is a barrier that unbiased marketing, inclusivity initiatives and affordable access alone cannot solve, but knowing those cultural barriers and limiting beliefs exist is critical to overcoming them.

The most significant opportunity for the paddlesports and adventure sports industry is recognizing people of color love the outdoors in the same way white participants do. Growing the paddling community means more partners and advocates for building whitewater parks and protecting wild and scenic places and waterways. Best of all—by diversifying whitewater, you’ll meet people you might not have met otherwise, and the community and industry will be richer for it.

Antoinette Lee Toscano, MBA, is a former IT executive, public speaker, contributing writer at Culturs magazine, producer of WhitewaterTV, and co-founder of Diversify Whitewater. Find her online at antoinettetoscano.com. 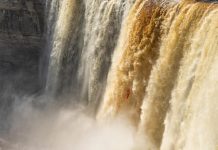 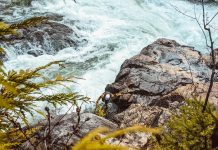