It’s July 22, 2012. I’m only halfway there, carrying the canoe up a three-kilometer-long, 1,500-foot-high portage. A storm of black flies keeps me company and have bludgeoned me to the point where the protective shirt wrapped around my head is soaked in blood. The temperature in the windless Poungasse Valley has crept to 30 degrees Celcius and sweat mixes with blood, running in a pink stream down my chest. We’re trying to crawl out of this chasm to reach the expansive Labrador Plateau. “Shoot when it’s hard,” they say. It’s showtime.

I drop the canoe on the tundra, pull the camera out of the case strapped to my chest and go to work. First, a close-up zoom and comment on my beaten face and the general situation. Next, run ahead 20 meters to set up the camera on a tripod for a third-person perspective of the carry. Finally, flip the canoe back on my head, grab my little point-of-view (POV) camera and turn the lens to my face before continuing to march uphill past the tripod. Drop the canoe again, pack up the camera gear, pop the canoe up and carry on with the journey.

Doubling back down the mountainside I meet up with Todd. He’s been seized with heatstroke and is on the verge of puking. Of course the camera comes out. I interview him about how he feels, then set up the tent so he can escape the black flies, hydrate and sleep off his condition. He drops into the shelter and immediately conks out for three hours. I tell the camera what’s happening and then film his passed-out body from an aesthetic angle shot through the tent screen that initially focuses on him before fading to a foreground of no-see-um mesh. I put away the electronics, grab a couple of bags and start back up to the canoe. So goes day three of a 620-kilometer, 21-day expedition and film production through Nunatsiavut and Nunavik with my friend Todd McGowan.

As an adventure filmmaker, this is just a typical day juggling the duties of director, videographer, editor, producer, expedition leader, camp cook and sherpa. Working within this creative box, I try to create intimate portraits of the landscapes I pass through. With national broadcasts of my past three productions, I’ve managed to scrape along from one project to the next.

To avoid burnout, I take an occasional break from filming. In 2010, I completed a canoe trip to Hudson Bay without my cameras and it was bliss (read an account of this trip in Canoeroots, spring 2012, www.canoerootsmag.com/0040). I basked in the experiential simplicity of that adventure—just a friend, a canoe and the boreal forest. Then I struggled with committing to film my next adventure.

I knew that I wanted to use film to show the interconnectedness of life in Labrador, but the all-consuming process of shooting a layered, broadcast-worthy movie about a tough expedition is like adding the logistical complexity of a third person to the canoe. In terms of energy and effort, it’s like bringing a toddler along. On the other hand, films I’ve made in the past have always been deeply rewarding. The tug of war in my mind didn’t end until the morning we left Vancouver for Goose Bay. The third person was coming.

Labrador is a vast region, the most eastern part of Canada’s mainland, and home to more caribou than people. North of its southern towns there are no connecting roads and the only way up is by plane or ferry.

With our canoe on board, we take the MV Northern Ranger on a two-day voyage along the coast to its terminus at the Inuit village of Nain. This community is my only chance to get the Inuit perspective of the land. Nain is the capital of Nunatsiavut, the Inuit region that comprises northern Labrador.

Filmmaking is a journey that parallels the canoe trip—you have an idea of where you want to go but never know exactly what, or who, is around the next corner. Unknown twists and turns are where adventure and inspiration arise. Likewise, the camera and the canoe are powerful tools if you have a purpose and mission. Both invite local populations to share ideas and stories they otherwise wouldn’t tell. I immediately begin hunting for relevant interview subjects.

Sarah Leo is the recently elected President of Nunatsiavut. I ask her about the area we’re to canoe through. She laughs heartily and says, “That’s not an area people go in the summertime—partly because of the difficult access…but mostly because of the flies.” I’ll use this quote in the narration of our buggy portage up the Poungasse a few days later. One interview down.

From Nain, it’s 238 thick kilometers to the George River in Nunavik and after speaking with Leo, I want to know if the rest of the locals think what we’re doing is rational, mad or somewhere in between. In a grassy field along the shoreline, I interview Johannes Lamp, an experienced hunter and local politician. He encourages and discourages me at the same time. “It will be difficult…but if you are determined, I think you can make it.” A nice bit of narration to lay over the portage footage, I think. In just a few hours I’ve managed to grab the local commentary I need to give context to the first leg of the film.

Though the Inuit and Innu have been roaming these lands for millennia, British explorer Hesketh Prichard is the only known person to have crossed over the Labrador Plateau from Nain by canoe. He paddled—then abandoned his canoe and hiked—a route north of ours over a hundred years ago. Back in Vancouver, I’d looked at the maps and crafted a route that I thought made more sense than Prichard’s. Here’s hoping.

On July 29th, Todd and I huddle behind a monolith on the shore of a large, unnamed lake while we wait for a heavy head wind to ease off. That’s the thing with the Labrador Plateau, it’s either windy or it’s buggy. Though it’s pleasantly bug-free behind this hunk of rock, we’re just sitting.

Progress has been slow since we crested the Poungasse and gazed across the Plateau’s moonscape of rock and heather. Many of the rivers and lakes shown on our maps are severely shallow, boulder-choked and unnavigable. As a result, we’ve had to be content with dragging slowly over the tundra with short spurts of paddling across small lakes. Averaging only 12 kilometers or so per day, it’s been a grind.

The wind across the Plateau doesn’t make it practical to carry the canoe so I’ve had to drag it overland with a line harnessed to my PFD. In the past week I’ve shot every conceivable dragging angle possible, to the point where the leading candidate for the film’s title is Dragging my Canoe across Nunatsiavut: A Fool’s Journey.

Groping for a fresh perspective, I pull out the rubber mosquito mask I’ve made for this trip. I slip it over my head and strip down to my briefs. Having recently filmed super close-ups of mosquitoes and their natural movements as they crawl over various parts of my body, I begin filming a sequence where I crawl, mosquito-like, around the tundra that will fade into a shot of a mosquito doing the same in the film.

On a deeper level, I want this film to illustrate the interconnectedness of all living things in the region—this scene will bridge the gap between man, mosquito and everything in between. The Inuit spoke of this connection during my interviews in Nain—though it’s unlikely they foresaw it this way.

Finally released by the Plateau several days later, we paddle into the crystal clear, brook trout-laden Natikamaukau River. This waterway is a privilege to descend as very few, if any, people have done so before. The Natikamaukau is 22 kilometers long and drops 400 feet from its source, snaking through water-smoothed rock slots down a deep valley framed by high, barren ridges roamed by caribou and black bear. It eventually spills into the oft-travelled George River, which we’ll ride north to our finish in Ungava Bay.

Todd is waiting with the canoe at the top of a class III rapid while I set up a fisheye lens on a bluff to get an overhead view of the run. Mounted on the back of the canoe is the POV camera set up on a three-link boom called a Magic Arm so both of us are in the shot. Often used as a lighting mount in studio work, the arm is the perfect device for shooting canoe films as it can be clamped anywhere and at any angle on the gunwales or thwarts. Having at least two unique perspectives of the same rapid is key to making a dynamic sequence. I don’t portage back up rapids to re-do shots so this is a one-shot deal.

I give Todd the signal, press record and scramble over the rocks, bash through the shore alder, splash through the shallows and hop into the canoe. With the POV camera rolling, I tuck into the spraydeck and we’re off.

The canoe slips into the current and we engage the river. I forget that I’m filming and enjoy the moment as a series of standing waves crash over Todd in the bow. We side-slip a series of pillow rocks before peeling safely into an eddy behind a large boulder.

After a bit of euphoric hooting and hollering, I hop out, scramble up the embankment and run 100 meters back to the still-running camera. In my mind I can already see how I’ll cut the scene when I get home. Surrounded by the barren splendor of Nunavik it dawns on me that this is a pretty good office—and I’m glad the third person came with us on our journey. As film and trip draw closer to conclusion and destination, I realize as both a filmmaker and adventurer, I couldn’t ask for anything more than this.

Frank Wolf is an adventurer and filmmaker who specializes in environmental documentaries. He lives in Vancouver. 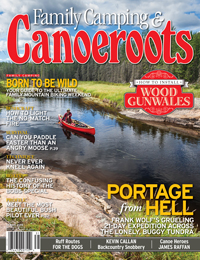 This article first appeared in the Spring 2013 issue of Canoeroots Magazine.