Driving across the heartland of America, you’d be hard pressed to notice the exit for Main Street, Charles City, Iowa. Nestled in the endless cornfields of the Midwest lies a quintessential small American town, just off the freeway. A grid work of streets supporting some 7,500 friendly residents runs parallel to Main, and trees form a sinuous green sheath along the Cedar River, which wanders through downtown.

Welliver and Graham pointed to towns in Colorado, where whitewater parks frequently show up at the center of successful urban renewal projects. For all its cornfields and negligible topography, Iowa has a surprising surplus of water. In Charles City, a decrepit, seven-foot-high low-head dam on the Cedar River could be dismantled to provide enough gradient for waves and holes. “We had no idea about whitewater,” says Kloberdanz. “It was totally not on our radar.”

“There was a realization that [kayakers] were exactly the type of people we wanted to attract to our town,” adds Ginger Williams, Charles City’s tourism coordinator.

Today, Iowa is an unlikely whitewater oasis. Charles City completed its project in 2011, and the nearby towns of Manchester and Elkhader followed suit with parks of their own in 2014. Williams gets a kick out of gazing at the license plates of the vehicles that roll down Main Street with boats strapped to their roofs. Boaters come from all around the Midwest to paddle the Cedar River’s three engineered features. Admission is free, the Cedar flows year- round, and city lights on bridges enable 24-hour surfing. “People come from all over to paddle here,” says Williams. “It’s really put our town on the map.”

A half-century has passed since paddling enthusiasts worked with the U.S. Army Corps of Engineers to create a whitewater run in Kernville, California, and over 40 years since concrete channels were poured for the 1972 Summer Olympics in Augsburg, Germany. Best estimate is that there are perhaps 60 whitewater parks in the United States today. These range from Charles City’s $2.8 mil- lion remodeled riverfront to Oklahoma City’s brand new Riversport Rapids, a completely artificial, pumped water park that cost over $45 million to build. Proponents of engineered whitewater proclaim these facilities to be bastions of vibrant communities and inspiration for the next genera- tion of slalom and freestyle boaters. But are they truly worth the cost? Is there something wrong with turning the age-old river experience into a theme park?

An in-stream project with all the bells and whistles—several engineered waves and holes as well as a restaurant, water fountain, outdoor concert venue and multi-use trails—costs around $3 to $4 million, or about the same as a twin-pad ice arena.

This genre was popularized in Colorado, where kayaker and engineer Gary Lacy created BoulderCreek Park in his hometown of Boulder in 1990. 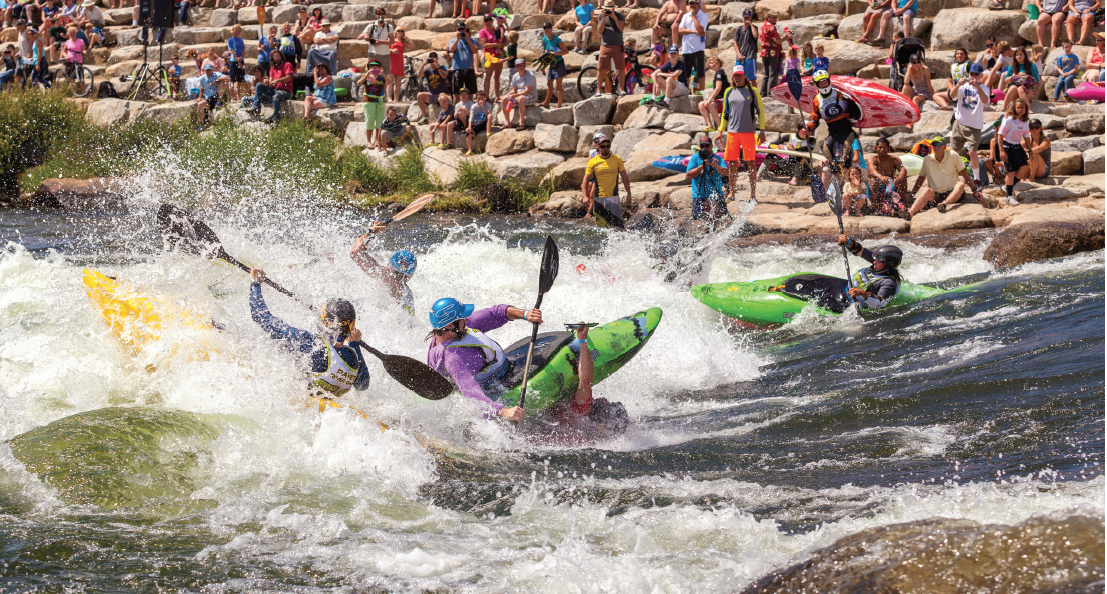 The $165,000 Golden whitewater park, built by Lacy in 1996, was the nation’s first publicly funded project. Since then, Colorado has emerged as the global epicenter of in-stream whitewater parks, accounting for around half the total number in the United States; and Lacy’s Recreation Engineering and Planning has designed the lion’s share.

“He’s the godfather, there’s no question about that,” says Shane Sigle, a former competitive slalom boater and water resources engineer who first practiced his trade under Lacy. “A lot of the design technology that happened in the first 15 years of whitewater parks came from Gary.”

Sigle, whose Durango, Colorado-based Riverwise Engineering works closely with Lacy’s firm, explains there are three components to turning an existing river into a whitewater park: Slope, depth and water volume. He says that the best designers, like Lacy, have an innate sense of flowing water, gleaned from countless hours of paddling. “An engineering background is important,” says Sigle, “but I’d say 40 percent of getting it right is based on intuition.”

River restoration has been at the heart of some of the West’s most vibrant small communities, including Salida, Colorado, whose riverfront has gone through multiple phases of improvement, San Marcos, Texas, and Buena Vista, Colorado, where pro paddlers turned developers Jed Selby and Katie Urban created an idyllic neighborhood on the Arkansas River. A new whitewater park on the Deschutes River has the outdoor community buzzing in Bend, Oregon.

Testimonials to the economic potential of river parks are convincing. For instance, the Vail Whitewater Park on Gore Creek hosts freestyle and downriver events for the GoPro Mountain Games each June. The 2015 festival attracted over 60,000 spectators and contributed nearly $5 million to the local economy in one weekend alone. An economic study in Golden pegged the value of the town’s whitewater park at up to $2 million annually with 40,000 visitors; and Reno, Nevada’s reclaimed Truckee River generates up to $2.5 million in commercial rafting revenue per year.

Essentially, urban whitewater attractions on natural waterways are an extension of the long paddling tradition of negotiating deals with utility companies and scheduling events for water releases. The difference, says Sigle, is that properly engineered river upgrades offer better access, optimized conditions for freestyle and downriver boating, and greater safety.

Surf waves and slalom gates comprise only part of the typical whitewater park experience. Most include some combination of bike paths, play areas, fishing holes and outdoor concert venues and restaurants. In fact, a 2011 study revealed that a full 75 percent of visitors to whitewater parks don’t venture on the water. They come to introduce their children to nature, to get a dose of fresh air over lunch hour, or to simply enjoy the sight and sound of flowing water. That only 25 percent of users paddle isn’t a concern to Sigle.

“When I show up to talk about whitewater parks in small town Iowa,” says Sigle, who drew up the plans for both Charles City and Manchester, “there’s always a bunch of people in the audience ready to throw tomatoes at me. But the sell isn’t exclusively whitewater. It’s about providing a beautiful amenity downtown, with trails and places for people to sit and fish. In the end, we find that the people who at first opposed the project come back with the biggest cheers.”

Adjusting for inflation, the cost of whitewater parks has remained consistent over time. All things considered, artificial whitewater facilities like the new park in Oklahoma City and the U.S. National Whitewater Center in Charlotte, North Carolina, come with price tags 10 times larger than the most elaborate instream design.

For Scott Shipley, another former Olympic slalom paddler, engineer and Gary Lacy protégé, the greatest thrill in whitewater design is dreaming up a river from scratch. With eight full-time employees, Shipley’s Lyons, Colorado based S2O Design is the largest whitewater park firm in the world. After training under Lacy, Shipley’s first big project was designing the entirely artificial facility in Charlotte. His modular “Rapidblocs”—fully adjustable, engineered structures to create river features—were critical in the design of England’s Lee Valley White Water Centre, a venue for the 2012 London Olympic Games.

Shipley is a huge proponent of whitewater parks—especially big projects like Charlotte and Oklahoma City, his latest creation, which are marketed as adventure theme parks. Both use pumps to recirculate tap water through specially engineered channels of varying degrees of difficulty, with a conveyor belt eliminating the need to portage back to the top of the run.

“Charlotte makes $22 million per year,” notes Shipley. “There are so many activities”—including mountain biking, rock climbing and outdoor concerts—“that once people find it, they keep coming back. Revenues grow every year. That shows it’s become a destination.”

Glenwood Springs, Colorado-based consultant Bob Campbell, director of Whitewater Parks International and a former coach with the U.S. whitewater team, has applied the same large-scale, futuristic model in designing Olympic facilities. He stumbled into the industry nearly two decades ago, when he partnered with Aussie John Sultan to design an artificial whitewater course for the 2000 Sydney Games. 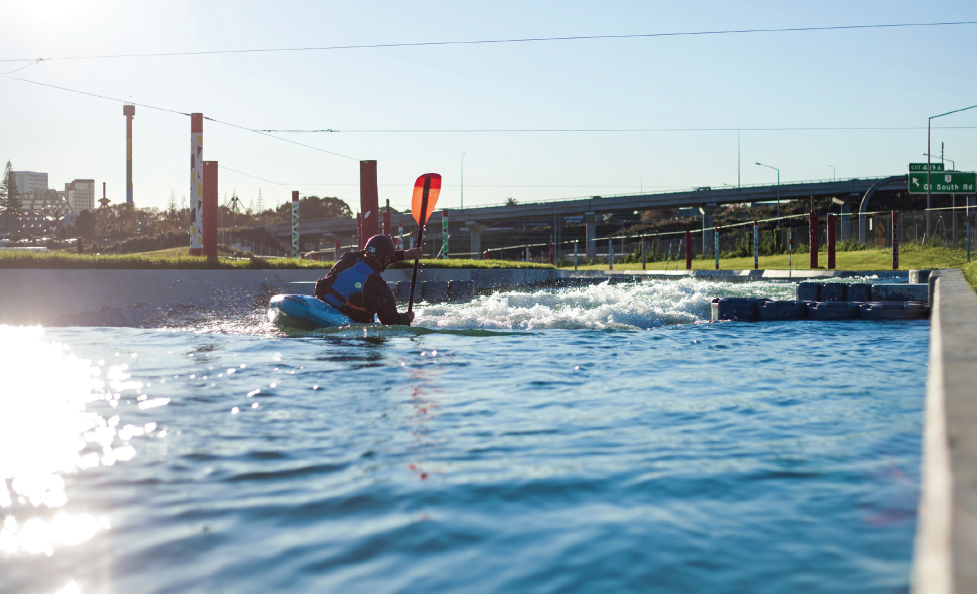 Just like any piece of Olympic infrastructure, Campbell says the challenge is to meet world-class standards, but also to ensure the venue will be appropriate for elite training, weekend warriors and families after the main event wraps up. It’s telling that the Sydney whitewater park is the only 2000 Olympic venue that steadily operates in the black.

“The big idea is that these large facilities can be used for recreational paddling,” says Campbell, whose firm was the lead designer at Lee Valley and recently completed the whitewater venue for the 2016 Summer Games in Rio.

Another Campbell brainchild is the Vector Wero Whitewater Park in Auckland, New Zealand, whose claim to fame is a 15-foot waterfall that’s commercially runnable in rafts.

In Sydney and London, “people can sign up for a rafting program without any whitewater experience,” adds Campbell. “How many different sports can you imagine where people can experience the same venue used by Olympians?

Even without the Olympics card, it’s an exciting, real, authentic kind of outdoor experience that’s accessible in an urban environment.”

Shipley cannot wait for the day he’s asked to build a whitewater park in a U.S. megalopolis like New York, Dallas or Miami. “Charlotte and OKC aren’t huge population bases,” he says, “but they show the potential. People are tired of rollercoasters.

They want to get active at home. With a whitewater park, you don’t have to go on a trip to the Rockies. You can have an adventure experience downtown.”

As the story goes, Michal Smolen was afraid of water when his family moved to Charlotte about a decade ago. After a few false starts, Smolen got hooked on kayaking at the U.S. National Whitewater Center. The rest of the story demonstrates the impact of whitewater parks: By the age of 16, Smolen was competing on the World Cup junior slalom circuit; in 2014 he was crowned the under-23 world champion; and now, heading into Rio, Smolen is America’s best shot at an Olympic medal in whitewater.

Meanwhile, competitive slalom and freestyle paddlers benefit from accessibility and predictably. It’s no surprise that most international competitions are hosted on engineered water. When the 2015 World Freestyle Championships were held on Canada’s Ottawa River, pundits predicted it would be the last time the event would be held on a natural feature. Mother Nature is just too unpredictable and incompatible with spectator events.

Instead of paddling two or three times per year when the conditions are right, recreational paddlers across the country can now paddle after work, practicing the same skills they can put to use when, say, the steep creeks in Colorado’s Front Range are running. “Paddlers used to be pioneers,” says Sigle.

“They were recluses, venturing into deep canyons in the middle of nowhere. Whitewater parks bring rivers to everyone’s front door. They’ve clearly made boating more accessible.”

The construction of a surfing wave on the Clark Fork River in Missoula, Montana, is yet another example of how whitewater can instill community spirit. “It’s a great vibe for the city,” says Doug Ammons, a Missoula native and veteran whitewater kayaker and author. “When there are 10 or 15 guys on the wave on a hot summer day, spectators line the bridge and the overlooks and the river becomes a centerpiece of fun.”

This article was originally published in Rapid, Volume 18 • Issue 3. Read this issue.