Every June paddlers from across the globe tackle the Yukon River Quest, the world’s longest annual canoe marathon. Racing from Whitehorse to Dawson City under the midnight sun, competitors must complete the 715-kilometer (444-mile) wilderness race in 74 hours or less. Race categories include single and tandem canoe, single and tandem kayak, and voyageur canoe. This year—for the first time ever—race organisers are including an experimental category for stand up paddleboards.

This year, 12 paddleboarders will compete. For the first time in the race’s history the max of 100 registrations has been reached.

“We were first approached by a paddle boarder from Spain who was interested in doing the race,” said YRQ race committee president Harry Kern when interviewed by Rapid Media. “This triggered lively discussion among the board members, and after talking to various people, such as the organisers of the Yukon 1000 (where two SUPS finished close behind the last kayakers) it became clear that proposal this was worth exploring. It makes sense for YRQ to change with current trends in paddlesports.”

For this trial year, SUP registration was limited as Kern and race organisers want to ensure that demands on volunteers and overall safety are not compromised. These places filled up almost immediately. All racers must be self-sufficient, carry mandatory safety equipment, and meet set times at safety check-points along the river.

One of the first paddler boarders to register was famed Maui-based expedition paddler Bart de Zwart. De Zwart plans to build on his successes in other long-distance races and trips by training regularly throughout the winter, both on his SUP and other sports. De Zwart recognises that beyond the physical and mental challenge, one of the biggest elements required for such a race is the detailed preparations. He plans to test all his gear beforehand from drysuit to required equipment such as emergency bivvy bag. Hypothermia is one of the main reasons competitors drop out of this race, and careful preparations for proper food, clothing and race routines can help mitigate this challenge.

“A lot depends on weather conditions,” commented Kern. “If we have a strong headwind, the SUPs might not even make it across Lake Laberge before the cut off time. If we have a tailwind, they might beat everyone else across the lake.”

Also an avid photographer, Kern adds slightly sheepishly: “Beyond the important safety considerations and logistics that come with this change, personally, I’m excited to see how the SUPs will do in Five Finger Rapids… I suspect there will be some great photo ops throughout the race.”

If the paddle boarders can meet the cut-off times and safely compete in these challenging conditions, they may be here to stay in the Yukon River Quest. 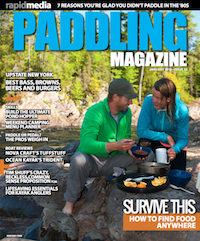 This article first appeared in the January issue of Paddling Magazine. To read the entire issue, click here.