It was two a.m. and a near-gale was howling. The bad news was that Paul Caffyn, scrambling for his glasses and headlamp, needed to exit the tent quickly. The good news—if you could call it that—was that there was no need to unzip the door, because a brown bear’s paw had just created another very large exit hole in the fabric.

Startled by Caffyn’s yell, the bear tripped over his kayak and ran off, leaving Caffyn alone on the shores of Alaska’s Bristol Bay with a severely compromised tent and over 1,000 miles yet to paddle to Nome.

Twenty-five years ago, Paul Caffyn was in the midst of one of sea kayaking’s most impressive journeys. While the New Zealand native is best known for his 1982 circumnavigation of Australia— repeated by Freya Hoffmeister in 2009—nobody’s ever tried to repeat his 1989–91 paddle from Prince Rupert, British Columbia, around Alaska, to Inuvik, on the Arctic Coast of the Yukon Territory.

“Many think of Australia as his crowning achievement, but I regard the Alaska trip as his pinnacle,” says longtime paddling partner Conrad Edwards.

Caffyn planned the expedition amid post-trip doldrums after his 1985 circumnavigation of Japan. He likened the purposelessness that followed an expedition to post-natal depression, “Once the elusive goal had been attained, there was nothing else really to strive for.”

As an antidote, he began poring over the world atlas. Alaska, where the traditional baidarka kayak was born, seemed like a nostalgic homecoming for a paddler.

The tracing of Alaska’s coast—a sea journey of 4,700 miles—was initially conceived as a single- season trip. But the Exxon Valdez oil spill in Prince William Sound in 1989 forced Caffyn to stop at the north end of Alaska’s panhandle, and the journey was recast into two more summers: from Elfin Cove to Nome, and then across the Arctic Coast to Inuvik.

The first crux was a 425-mile stretch from Cape Spencer near Glacier Bay to Cordova in Prince William Sound. Exposed to the full brunt of the Gulf of Alaska with only three protected landings, this coast had been kayaked just once since 1900. Landing in the surf, Caffyn’s yellow Nordkapp was tossed end-over-end and he was ripped from the cockpit. He managed to grab his kayak seconds before the undertow pulled it out to sea.

Caffyn carried no form of communication. He shared his plans with only a few people, and those who knew were sworn to secrecy. Caffyn wanted to avoid the hassles from maritime authorities he’d encountered paddling around Japan and Tasmania. His only safeguard was a phone call to a friend in Ketchikan when he picked up each of his food drops at small post offices along the coast.

Add long miles, pre-GPS fogbound crossings, close encounters with whales and walrus, sea ice, storms of Alaskan magnitude and an ursine- shredded tent and you have more stories than most adventurous paddlers will acquire in a lifetime.

“I have always considered myself as having modest ability, but better than average motivation. And I feel so exceedingly bloody lucky that I was there at the right time to kick off the golden age of expedition sea kayaking,” Caffyn, then 66, told Australian Geographic in 2014.

“He saw in the sea kayak a new vehicle for exploration and immediately started pushing the boundaries of its use and then inventing and demonstrating new boundaries,” Edwards reflects.

Caffyn’s minimalist, solo, unplugged expeditions are both an invitation to dream of the simplicity of a bygone age of wilderness exploration, and to dream of our own possible horizons.

A quarter-century later, another inconceivable expedition has concluded. As I write, Freya Hoffmeister is paddling back into Buenos Aires after four years and 16,000 miles around South America—another trip unlikely to be repeated any time soon.

Paul Caffyn’s new book on his Alaska journey is due later this year. His Australia and South Island New Zealand expeditions are recounted in The Dreamtime Voyage and Obscured by Waves. 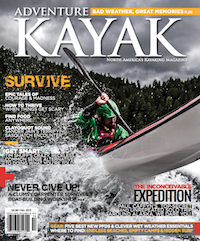