The Baja Peninsula is a 1,000-mile-long invitation to adventure. In places you can stand on mountaintops and see both the Pacific Ocean and the Sea of Cortez. The Pacific coast is where expedition paddler Dan Kennedy broke his nose over the deck of his Nordkapp while landing through surf. The Sea of Cortez is where most sea kayak companies run trips.

The Sea of Cortez is the world’s youngest and richest ocean at about 100 miles wide. The Guaymas trench, in roughly the middle, plunges nearly a mile deep and contains belching volcanic and hydrothermal vents which support life based on hydrogen sulfide instead of sunlight. That discovery was a major shift in our understanding of what makes life possible.

Baja seems to be a place of new perspectives, a place of opening. Something moves people. Is it the incredible scale of the landscape? The inspiring tenacity of the plants and intertidal life? The hugeness and mystery of the whales? Is it what a vacation does to people?

Those who are tuned into energy fields say that between the coastal Sierra de la Giganta mountains and the islands near Loreto is a basin for catching energy. No matter how you look at it, the view from Carmen Island stirs the soul as the evening sun works its way over the peaks and long rays pick out Los Tres Reyes and other spires in turn.

There are four ways to trip in Baja with something for every type of paddler: destination trips, mini expeditions, road trips and full-on expeditions. Here’s a sampler with a taste of each so you can dream and plan your own perfect Baja trip. 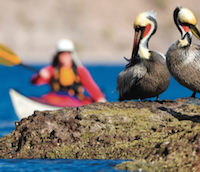 Destination trips are the most straightforward, where you launch and land in roughly the same place and paddle around for a week or so in between. popular destinations include three national marine parks with islands: Bahia de Los angeles—or Bay of L.A. — (1,013 km or 630 road miles from Tijuana), Bahia de Loreto (1,700 km or 1,100 miles) and Espiritu Santo (near La Paz, 2,414 km or 1,500 miles). Recently protected for their uniqueness, fragility and abundance of life, these parks also manage kayakers. Permits can be bought in the park office in the respective towns.

Mini expeditions go a short distance, so the shuttle constitutes less than 50 per cent of the travel budget and adventure quota. The most popular and accessible mini expedition is Loreto to La paz, or variations thereof.

Road trips have the fun of exploring Baja by land as well as sea and target paddling destinations along the way. This has been my favorite method of exploring. 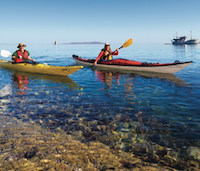 Expeditions commit serious time to travelling by sea. Paddling the length of the sea of Cortez often begins in unremarkable san Filipe. “The only reason people start at san Filipe is to say they did the whole thing,” declared expedition paddler Dan Kennedy after starting there three times.

Expeditions come with a bonus shuttle adventure. For example, according to Jen Kleck of aqua adventures, “a couple recently paddled the length of Baja and found transport back to San Diego for them and their kayaks in a semi heading north empty. They made this connection at the Costco loading dock in Cabo. A couple of guys heading to Mulege have arranged transport back north with a gringo who owns a hotel in Mulege.”

Sample trip: San Felipe to Cabo San Lucas
Access: get creative on this one. Have a friend drop you off in San Filipe and figure it out in Cabo. Or just stay.
Kayaks: BYOB. length: about 1,300 km (700 nautical miles), 3 months.
Permits: Check in at park offices as you pass by. To fish, you need licenses for both your kayak and yourself. Ask at the park offices about where to buy.
Highlights: living with the rhythms of the sea and its animals, remote sections nobody else bothers to do the logistics for.
Experience Sez: a basic command of Spanish would be really helpful.

Ginni Callahan is the founder of Columbia river Kayaking and Sea Kayak Baja Mexico. She teaches and guides during summer on the Lower Columbia River and during winter in Baja, Mexico. 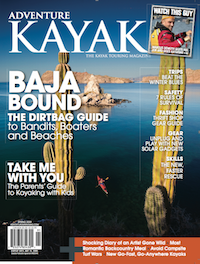