The father of the British-style sea kayak movement in North America once scoffed at plastic boats. In the early 1980s, Stan Chladek brought Valley Canoe Products and the holier-than-thou attitude of the British Canoe Union to a small paddling shop just outside of Detroit, Michigan. Chladek’s mindset was that if a sea kayak wasn’t made of layer upon layer of fibreglass and coated with scads of gel coat, it wasn’t worth paddling; rotomoulded polyethylene boats were nothing but “coffins.” Isn’t it ironic that Chladek’s beloved Nordkapp is now available in plastic?

The Valley Nordkapp is among the longest running sea kayak designs, created in 1975 by Briton frank Goodman. Somehow, Valley has managed to maintain the same sleek and sexy lines while morphing the Nordkapp from a tippy, expert-only missile to an intermediate-friendly—yet still expedition-ready—cruiser. along the way, it’s been paddled to the ends of the earth, from Norway to Cape horn and everywhere in between in swell, surf and piss-on-a-platter calm.

The Nordkapp RM mirrors the dimensions of the latest composite version. It sports large oval hatches fore and aft, a retractable skeg and moderate stability, which all told make it easier to pack and more manoeuvrable and stable than earlier models. Yet as its pedigree implies, the RM is still nimble in rough seas and handles better as the load becomes heavier.

Paddled empty, the Nordkapp RM feels bigger and more secure than its narrow beam and shallow depth imply. It’s dry in choppy waves due to its flared, voluminous bow and catches waves predictably in a following sea. Like most British boats, course corrections are best made with hip-initiated turns; the RM is quite manoeuvrable when paddled on edge and will complete a 360- degree turn in half-a-dozen well-executed strokes. It becomes bomber stable right to the capsize point and cruises easily at seven or eight kilometres per hour when loaded down for a long trip.

Plastic prejudices aside, the construction of Valley’s plastic sea kayaks is impressive. The hull is rigid and tough, yet noticeably lighter than its counterparts—even lighter than many composite Nordkapps. Performance-wise, even scrupulous Chladek would agree, the Nordkapp RM will never be left for dead in the water. 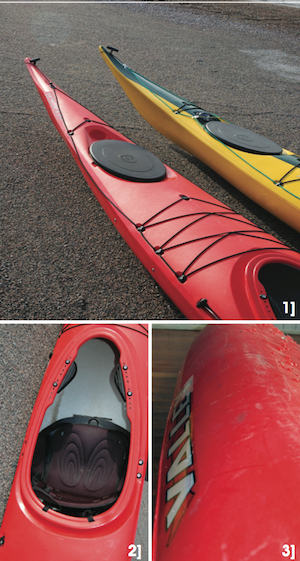 Only the crisper lines of fibreglass are missing from the Nordkapp RM when compared to its composite brother. The boat shares the same peaked foredeck, functional deck layout and compass recess.

2] Shoot from the Hip

Valley’s new seating system has more bells and whistles than their former, fibreglass design. Thigh supports are adjustable to offer a comfort- able, performance-oriented fit for paddlers of all sizes. Time will tell how well the plastic seat and customizable, padded hip pillars will stand up to heavy use.

The Nordkapp RM’s hull nearly matches the rigidity of composite boats due to Valley’s unique tri-layer laminated plastic. Bulkheads are welded in place and contoured slightly to make them extra strong and watertight yet flexible enough to protect the hull from stress damage upon blunt impact. 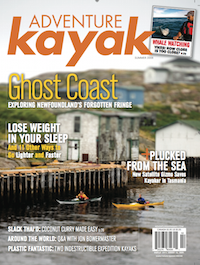