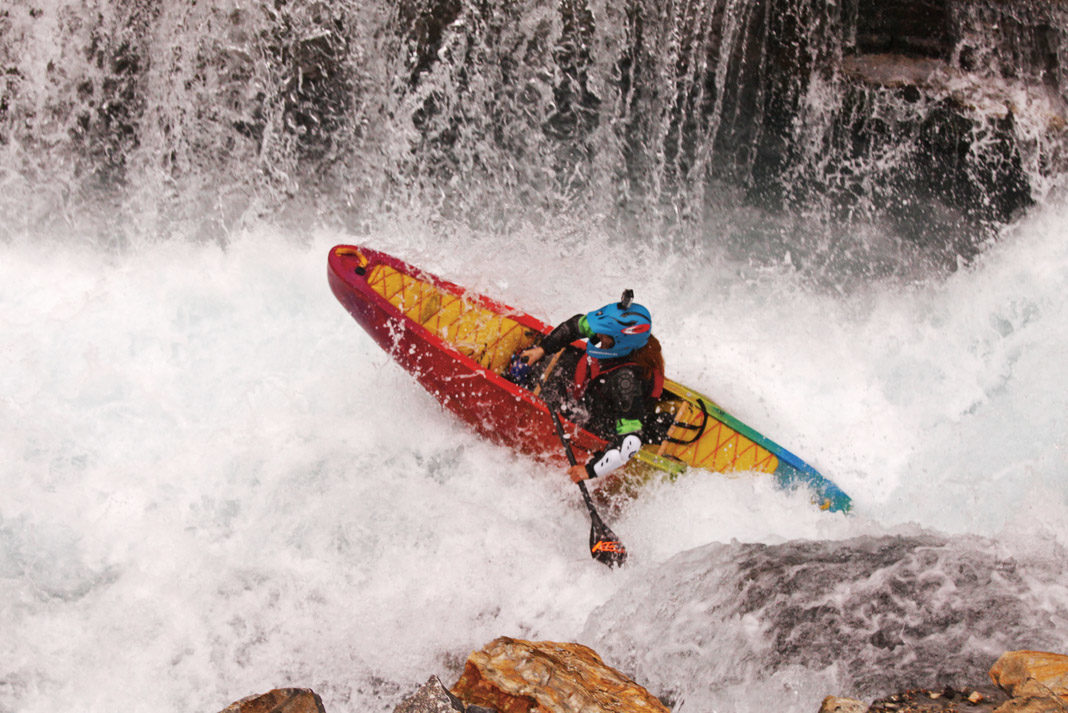 Like most whitewater paddlers, Sabrina Barm struggles to find words to describe her passion for wild rivers.

“It’s something I need, like breathing,” says the 30-year-old canoeist and extreme creek racer from Germany. “If I can’t paddle, something is going to go wrong sooner or later. It’s a sensation.”

Barm also focuses on a feeling when describing the nine-foot creeking and river running OC1 she designed for Quebec’s Esquif Canoes, which hit the market late 2017. With the new Esquif Extasy, Barm says she achieved her goal of creating “the most intense form of joy.” In doing so, she also became the world’s first female whitewater open boat designer.

Barm took her first strokes in a canoe with her father on bucolic European waterways. Soon she was paddling whitewater, a rare breed in Europe for her propensity for single blades and open-decked boats. She found inspiration in European paddlers Eric Deguil and James Weir, along with pioneering American open boaters Dooley Tombras and Eli Helbert.

An engineer by training, Barm balances elite-level paddling with a professional career in the automotive sector. However, it didn’t take an engineering degree for her to identify a critical fault in open canoeing. The market was exclusively comprised of boats designed by men.

They were great for a standard size guy but for smaller people there was nothing,” Barm says. “Basically it’s like wearing shoes a few sizes too big. You won’t have an optimal experience.

She made her case to Esquif. “In university I worked on a boat design method and I wanted to try my theory on a new canoe,” she says. Esquif owner Jacques Chassé was an easy sell. Barm tackled the project with vigor, establishing performance parameters—“acceleration, precision, hull speed and ergonomics”—crunching numbers in mathematical models and manually shaping foam prototypes on weekends.

“The budget was as low as it can be,” she admits, “I was pretty happy when the second prototype worked.”

Like Esquif’s game-changing L’Edge, a do-everything OC1 debuting in 2011, the Extasy is compact enough to be adequately light and stiff in bombproof rotomolded polyethylene. With pronounced asymmetry and hard edges, it lacks the aesthetic curves of traditional canoes, reflecting Barm’s commitment to “100 percent fluid dynamics and functionality” in her design process.

She Says The Extasy Displays Exquisite “Driving Dynamics”—Engineer Language For Effortless Motion Through Water—And Is Optimized For Sub-150-Pound Paddlers.

“I’m so in love with the design, it’s hard to contain myself,” Barm enthuses. “Acceleration is so on point, it boofs like launching a space rocket and it’s faster than many longer boats.”

Chassé says the Extasy captures Esquif’s focus on innovation. Initially, Barm’s design was “a bit surprising to us,” Chassé admits. But he was sold on the performance. “It brings the open canoe to another level with a focus on speed, quick turns and precise paddling.”

Barm isn’t too concerned with being the first female open boat designer.

Being female doesn’t make me special. My parents taught me to be strong, and raised me to do what I want regardless of my gender,” she says. “If I can inspire other women, who may not have been given the confidence, then of course it’ll make me happy.

Barm says her next step is developing confidence in pushier water. The Extasy is a big part of her development. “I don’t have to worry about the boat any more,” she says, “I just paddle.”

Just as her own performance reaches new heights, Barm hopes the Extasy will inspire others to reach their own objectives.

“It’s more than just a boat,” she says. “To me, it’s empowerment to reach your potential, to paddle without limits. It’s an encouragement to go as big as you want to go. Most of all, it is my declaration of love for the river.”