With equal passion for finding lines on the river and in the sky, Raphael Boudreault-Simard transformed hobby into a living more than two years ago when he opened photography business, Flow Motion Aerials.

Based in Whistler, British Columbia, the 26-year has flown his drones above kayakers in exotic destinations like Greenland, West Papua and Pakistan in the last year alone.

Raphael started kayaking and taking photos 10 years ago with the Quebec Connection crew, a loose group of Quebecois paddlers who made a name for themselves exploring little-documented wild river runs. His passion for aerial photography was hatched following a shoulder injury while guiding in New Zealand. He learned to fly on small, cheap units, crashing often.

“Whitewater rivers are one of the most challenging environments to fly a drone because of all the branches,” he says.

After a decade of river life, it’s no surprise Raphael talks about flight lines the same way he talks about river lines. “You are rewarded for being a bit bold,” he says. “Even if a line is risky and hard, when there is good experience, preparation and judgement, you can execute with style.”

For those looking to get serious about aerial photography, Raphael offers a peek into the professional kit helping him make a living 300 feet above the river.

“These drones are the best bang for your buck,” says Raphael. “You can get better quality with a bigger drone, but then you have to dismantle it for travel. That’s a mess.”

The X5S camera offers DSLR quality in a small, light package, and is specifically designed for use with the Inspire 2 drone. The camera comes with gimbal and stabilization motor, which is why it’s so pricey.

“I have two aircraft units just in case something goes wrong on a commercial project—it could be a crash or a technical difficulty,” says Raphael. “Insurance is also a must.”

Drone operators need big, bright monitors to see as much detail as possible. Bigger monitors also typically have faster processors, which is especially important in river environments where lag time can result in a crash. At Flow Motion, Raphael uses an iPad Pro and the DJI CrystalSky, which is four times brighter.

The Inspires require two batteries to operate. A pair offers 18 to 22 minutes of flight time. “It doesn’t sound like a lot but for drones, it’s a good amount of airtime,” says Raphael. Each battery uses 97 watts per hour, which is just below the threshold for which most airlines have regulations. Raphael has 14 batteries to avoid the hassle of charging in the field.

The four lenses in this kit—7.5mm, 12mm, 25mm and 45mm—are made for a Micro Four Third camera system, which means each lens’ aperture width is equivalent to double the size in standard cameras. Wide-angle lenses create a sense of speedy flight because the viewer sees a lot of movement on the edges of the frame, while narrower lenses can create parallaxing—when different layers of depth are sliding against each other.

“The most classic example of parallaxing is when climbers are at the top of a peak, and a helicopter is rotating around them making the background shift very fast behind the subject. It has a very cinematic feel,” says Raphael.

“Filters are very important because we don’t want too much light coming into the camera. Slowing down the shutter speed creates motion blur in the image which is how our eyes see, and so it’s more natural. Polarized filters are good to keep handy to mute the sun’s reflection and get more details on the water’s surface.”

During river shoots, Raphael gives a radio to the trip leader or river guide for communication, “We might need to catch the kayaks on a certain corner, and usually we lose visual on boats in the river environment,” says Raphael.

While it doesn’t compare in image quality to the Inspires, portability makes the Mavic Pro a great tool. There’s no interchangeable lens option, but its 20mm-equivalent lens offers a mid-wide view. “It packs up to the size of a Nalgene—it’s lightweight and I can stuff it in my kayak, or use it as a backup on commercial shoots,” says Raphael.

[ Also read: How To Edit Paddlesports Videos In 5 Steps ]

“It’s difficult to be a single operator and consistently land hard shots. Having a second solid operator makes all the difference,” says Raphael. Single operators are tasked with set-up, timing, flying and safety of the drone, while framing and nailing an excellent shot.

Using the dual hand-controller system of the Inspire, Raphael can split duties—while he controls flight, a partner frames the shot and communicates where they want the drone next. “It’s synergistic, more dynamic and the possibilities are significantly increased for the client,” he adds. Not to mention, it’s someone with whom to share the burden of schlepping 60 pounds of camera gear. 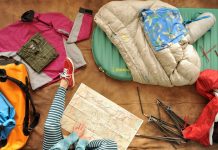 The Best Paddling & Camping Gear For Your Next Canyon River Trip 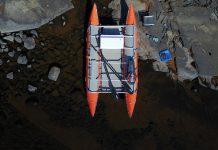 8 Essentials For Paddling The Grand Canyon 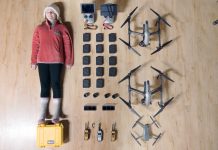